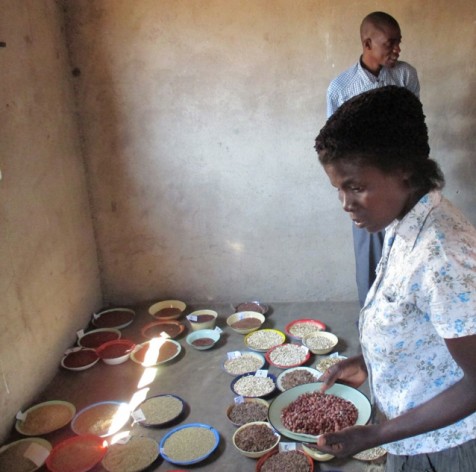 HARARE, ZIMBABWE, Nov 30 2015 (IPS) - It was all smiles as Bertha Chibhememe of Sangwe communal area in Chiredzi, south eastern Zimbabwe, showed off her traditional seed varieties at a seed fair. A 45-year-old smallholder in Zimbabwe’s lowveld region, Chibhememe told how her “nzara yapera” maize variety is thriving in a changing climate.

The name means “hunger is gone” and is traditionally peculiar to the Shangani people, explained Chibhememe, a widow who looks after eight school-going children. It allows her to protect her family from starvation in a region where it can seem impossible to survive without food aid or donations.

“That is my secret,” she added. “This traditional short season maize variety together with other traditional small grains like sorghum, millet and rapoko are the best in this area. They secure our future food and nutrition for our families. We receive low rainfall and frequent flash floods and extreme temperatures.”

Bertha’s example has invigorated community members to adapt to shifting weather patterns as the planet warms. Through traditional seed fairs and workshops, farmers have a platform to share best farming practices.

A recent study by Care International-Zimbabwe found that female farmers were more receptive to these ideas than their male counterparts. But they could not always use such information to their advantage due to a culture of male dominance of the household. Women did not get to decide what crops to grow and when.

This is proving to be a setback in the quest to embrace climate change adaptation techniques. But it is slowly changing, as the Zimbabwean government has started issuing land rights to women smallholders, previously a taboo.

“These conditions, combined with warming trends, are expected to render land increasingly marginal for agriculture, which poses a major threat to the economy and the livelihoods of the people,” said Mawire.

Zimbabwe depends heavily on rain-fed agriculture and climate sensitive resources. Farmers, who make up 62% of the population, are expected to feel the effects.

Yields from rain-fed farming in Africa could halve by 2020, according to a recent report from the Intergovernmental Panel on Climate Change. Semi-arid and arid areas will be worse affected, raising the risk of malnutrition and hunger.

Micro community initiatives can help, however. A water harvesting system in the Zvishavane, Mberengwa and Chivi districts, some of the hottest and driest in Zimbabwe, is one. It is as simple as digging pits to capture water in the rainy season and save it for drier periods.

A communal farmer in Zvishavane, Akwenziwe Maseko, said water conservation was essential to get strong crop yields. Farmers had been able to keep vegetable gardens going for more of the year and have more secure food supplies.

Zephaniah Phiri, a local conservationist who championed the water harvesting idea, stressed the importance of sustainable ways of managing and exploiting natural resources. Measures like planting vativa grass for windbreaks and sand traps were “very crucial,” he said.

With rainfall forecasts for the 2015/2016 farming season anticipated to be below normal, there is no time to lose.

This story was sourced through the Voices2Paris UNDP storytelling contest on climate change and developed thanks to Megan Darby and Climate Home.