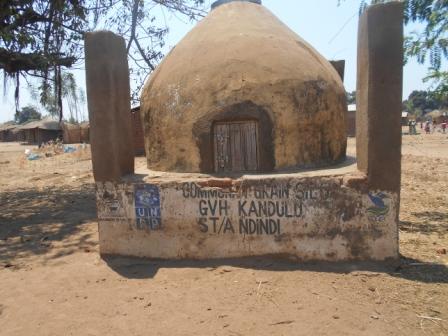 A community grain silo, no longer in use as farmers can't grow enough to save. Credit: Watson Maingo

LILONGWE, MALAWI, Dec 3 2015 (IPS) - The government of Malawi has been struggling to end poverty since independence in 1964, banking its strategies on the proceeds from its agro based economy. Sadly, climate change entered the scene and dramatically disrupted the farming sector.

Annie Ganizani, 47, a subsistence farmer from Kandulu village in Salima District has witnessed its impacts in the last decade.

“I was born in a family of subsistence farmers. My parents failed to give me education due to other reasons poverty, but when I got married and was blessed with some kids, I believed that through hard work I would be able to educate my kids,” said Ganizani.

“Our leaders used to tell us there was no reason for me to worry as the land was indeed producing more than enough. Farming was a very promising occupation and the only hope for our uneducated community,” she said.

Unfortunately her dreams were shattered by the prevailing brutal effects of climate change.

“We first noticed that something was wrong around us after the year 2000 when the rainfall pattern changed. Unexpected floods, drought, and dry spells became an annual occurrence,” said Ganizani. “The floods and dry spells quickly resulted into dwindling yields leading to food shortages and subsequently taking us into extreme poverty,” she added.

In 2004, heavy floods from near-by Lifidzi River destroyed her village and farm land.

“After the floods, we moved to this new area only to be given a smaller piece of land. We continued harvesting just enough to last us a few months. In the end we are engaging in activities that contribute to climate change” said Ganizani.

Now 10 years after relocating to upper land Ganizani, her family is poorer than they were in 1999. “I do believe that climate change and poverty should be addressed together,” she said.

Although climate change has turned the livelihoods of many villagers upside down and even in spite of the government of Malawi and other organizations’ continued interventions, communities are indirectly contributing to climate change.

“Many people want to run away from poverty by cutting down trees for charcoal and cultivating in river banks which, in turn, makes them more vulnerable to floods and droughts” said Majawa Bwanali, chairperson of the Kandulu Village Disaster Risk Management Committee (VDRMC).

Environmental District Officer for Salima Davies Chogawana concurs with Bwanali and said that efforts to reduce the impacts of climate change are continually challenged by local efforts to end poverty.

“People still cut trees down wantonly, still use charcoal at large scale and some of them still cultivate in river banks, triggering ever more floods and droughts,” said Chogawana.

Assistant District Disaster Risk Management Officer (ADDRMO) Blessings Kamtema said that it is unfortunate that not all victims of climate change related disasters have been rehabilitated despite interventions.

“Salima, one of the districts most hit by climate change in Malawi has been receiving support from many organizations. However, these area-specific interventions might not have restored the livelihoods of all the affected people,” said Kamtema.

With funding from UNDP under AAP projects, Kamtema said the Council and the community from Kandulu were able to build a dyke on the Lifidzi River which has prevented the river from flooding and causing havoc in Kandulu Village in the last three years.

Kamtema also said that with support from GEF, people of Kandulu village have built an evacuation point in times of floods so people no longer seek shelter at a primary school in the area.

DDRMO explained that with funding from UNDP, the Council has managed to establish a climate information for climate and weather early warning and farming planning.

Over 50% of Malawians live in poverty and 80% of Malawians depend on farming for their livelihoods. Unless climate smart agriculture technologies are passed on to all small holder farmers, the government goal of ending poverty by 2030, as pointed in the Sustainable Development Goals (2015-2030), will not be achieved.

And if poverty is not checked and alternative economic activities are not identified, little progress will be achieved to minimize our contribution to climate change.

This story was sourced through the Voices2Paris UNDP storytelling contest on climate change and developed thanks to Urmi Goswami from The Times of India.