GENEVA, Dec 2 2015 (IPS) - Arctic temperatures have increased twice as much as the global average in the past 100 years. Recent photos show that thousands of walruses normally resting on sea ice between dives to find food have been forced to crowd ashore because of extreme sea ice melt in Alaska. Such photos have once again reminded us that it is high time we take serious action on climate change if we want to save the Arctic. 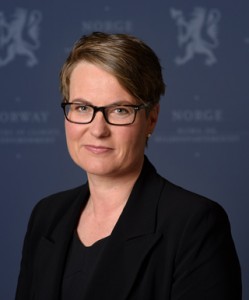 Tine Sundtoft is the Minister of Climate and Environment of Norway. 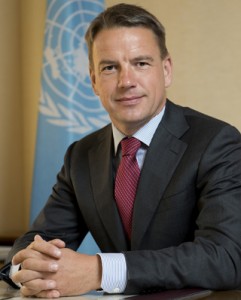 Calling Arctic countries our homes, we are both particularly concerned about Arctic ecosystems and their extreme vulnerability to climate change. As a result of diminishing sea ice and snow cover, entire habitats are being lost, threatening unique species, such as the iconic polar bears and walruses, as well as the traditional livelihoods of indigenous peoples.

Not only CO2 and other greenhouse gases, but also some air pollutants have impacts on climate change in the Arctic, such as black carbon, a component of particulate matter which is produced by the incomplete combustion of fossil fuels or wood. Also known as a short-lived climate pollutant, black carbon has a particular relevance in the Arctic, as it absorbs sunlight and thus increases melting when it is deposited on ice and snow.

A changing climate, however, does not affect the Arctic only; it is felt all around the world. When the reflectivity of the Arctic surface is reduced, resulting in further warming and melting of ice, it has an escalating effect on sea levels and temperature increase also on a global scale.

We are the last generation with the ability to stop climate change and save the Arctic. If we fail, it will be a historic mistake. But we have to act fast. This is why, in the run-up to COP 21, the Climate Change Summit in Paris, we have been drawing attention to the benefits of addressing climate change and air pollution in a more integrated way.

Climate change and air pollution are posing an increasing risk to our collective security, prosperity and well-being. WHO reports that in 2012 around 7 million people died across the globe as a result of air pollution exposure, confirming that air pollution is now the world’s single largest environmental health risk.

While the effects of air pollution are mostly being observed at the local level, a large volume of air pollutants are transported across borders and even continents. This is particularly true in the Arctic, where around 50 % of the emissions of black carbon are coming from Europe. Hence, joining efforts internationally to reduce emissions is critical to save the Arctic.

A number of actions are already being taken. Through the Convention on Long-range Transboundary Air Pollution, which sets emission targets for a number of key air pollutants, UNECE also contributes to climate change mitigation. This pioneering treaty, signed to solve the problem of acid rain in Northern Europe in the 1970s, now has 51 Parties, including all the countries of the Arctic. Thanks to the collective efforts of these countries, emissions of key air pollutants have been reduced by 40 to 70 per cent since 1990 in Europe and by up to 40 per cent in North America.

In 2012, Parties broke new ground in amending the Gothenburg Protocol, which is now the first legally binding agreement containing obligations to reduce short-lived climate pollutants, notably fine particulate matter (PM2.5), including black carbon emissions. The Gothenburg Protocol is thus an example of how air and climate pollutants can be tackled in a more integrated way.

The Arctic Council, an intergovernmental forum that addresses issues faced by the eight Arctic countries and the indigenous peoples that live there, has taken a leading role in providing updates on the rapid climate changes in the Arctic and its consequences for our societies and the environment, locally and globally.

We call on all countries to step up their efforts and make sure that COP 21 will deliver a strong agreement. We also call on Governments to ratify and implement the Gothenburg Protocol and consider further initiatives to tackle air pollution and climate change in a more integrated way. Let us act now to both tackle climate change and save the Arctic!