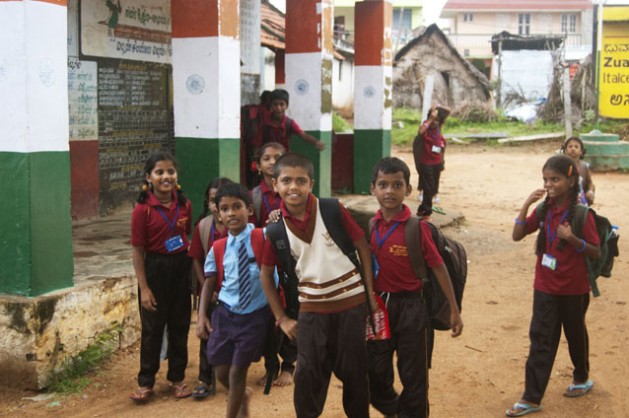 BANGALORE, Jan 14 2016 (IPS) - Though the state of Karnataka in India counts for a higher Human Development Index of 0.478 against the national average of 0.472 in the subcontinent, the continued deficit in water and sanitation continues and the children there are bearing the brunt of the lack of infrastructure.

Coupled with the so called Godzilla El Nino of 2015 that washed out the critical southwest monsoons, the resultant deficit in water supply caused water borne diseases to flourish among children in Karnataka. The dengue virus breeds in stagnant fresh water, a direct manifestation of inadequate water and sanitation infrastructure. A staggering third of the population still openly defecate, making it impossible to fight such diseases.

Dengue was at an all time high in India in 2015 and accounted for 4691 cases and nine deaths last year, according to statistics provided by the Federal Health Ministry of the Government of India (http://nvbdcp.gov.in/den-cd.html).

“The majority of hospital admissions in Karnataka’s Vani Vilas Children and Women’s Hospital is for Dengue cases, between January and September 2015 the number of dengue cases was 799 children out of 2800 dengue cases in VV Hospital alone,” said Dr. Premalatha, the Head of the Department of Paediatrics in the state’s premier child health care hospital speaking exclusively to IPS. “It is an utterly preventable disease that drains the resources unnecessarily,” she said.

Diarrhoea, dysentery, gastroenteritis, and cholera continue to plague children from below the poverty line affecting slum children and increasing child mortality, stunted growth, and malnutrition all of which contribute to school drop out rates, thus sustaining poverty over the next generation and also affecting lack of resilience to disease and pestilence.

“All Anganwaadis (pre-school crèches), are financed with 74 cents per month as grant money exclusively for furnishing sanitation and toilet cleansing agents in Yellapur Taluq. All Anganwaadis functioning in private premises enjoy water and sanitation infrastructure. Some of them even have flushing toilets,” said Lakshmi Bhat who is managing Anganwadis in Yellapur Taluq of Uttar Kannada, a coastal District in Karnataka. She works for the Women and Child Welfare Department of the Government of Karnataka.

Asha Hegde is a teacher and governess of the Anganwadi in Harohalli Taluq about 60 kilometres south of Bangalore. She tutors children between the ages of two to 14 years of age in a single classroom. She said, “The primary aim is to impart basic life skills, a window of opportunity to the world through education and exercise, offer nutritious supplements and offer clean water and sanitation infrastructure and increase the resilience of rural children. Most children use toilets with water and sanitation in our school but once they go home, some of them – at least two children in our school – lack water and sanitation and defecate in the open. We submit a monthly chart of groceries to the women and child welfare department which is delivered to the depot of the Anganwadi.”

“As per norms, our cooks prepare meals proportionate to the nutrition index and offer a combination of foods like millet soups, rice, vegetable soups, eggs, milk, multi grain porridge etc., at different meal times so that children get to learn, play, exercise, eat and sleep well in a secure environment when their parents are working as daily wage earners,” said Asha Hegde.

Children from diverse economic backgrounds and socioeconomic indicators, like literacy, attend these pre-school crèches in villages right across the sub-continent. K. Nagamani who worked for a whole decade in Anganwadis in half a dozen villages in the Kolar district with support from NGOs like Gramvikas (http://www.gramvikas.org/) said, “We were trained in cooking nutritious meals with whole grains, vegetables, milk, eggs, fruits, rice, millet and protein soups.”

“But the lack of water and sanitation led to frequent water borne infections like dysentery, diarrhoea, cholera, jaundice, in children whose resilience came down with repeated infections. Despite admission in these crèches and participation in academic and extra-curricular activities and nutritious food, sleep, clean clothes, water and sanitation, in school environment, all of these were lacking in their homes, triggering water borne infections in the most vulnerable groups in the communities – the children had to walk in filth and sewage infested terrain to defecate on the horizon nullifying the impact of nutritive interventions in schools, ” She said.

The state has 21.85 million children according to the 2011 census but a third of these children suffer from stunted growth, “This is largely because of such water borne diseases as these diseases decrease 5 per cent of body weight in growing children; and recurrence triggers malnutrition because of less food retention; lack of resilience and a higher proneness to opportunistic infections,” Dr. Premalatha added.

“It is easier to prevent breeding of mosquitoes; the dengue virus breeds only in fresh water that stagnates. Sewage drains and sanitation infrastructure is disproportionate to the population and is unsustainable; the infrastructure design of sewage certainly needs a relook,” said Dr. Premalatha.

The inadequacy in water and sanitation was 48.1 per cent in rural households in Karnataka in 2012, according to a study by WASH and National Sample Survey Organisation of the Government of India, and affects medical infrastructure as critical care is taken up for Dengue patients, she explained.

The deficit in water and sanitation in Karnataka manifests in 49 per cent open defecation where people go out to the outskirts to relieve themselves, and accounted for 65 per cent of recurrent diarrhoea, a water-borne disease in children below the age of five in 2013 – 14, according to a UNICEF Factsheet (http://planningcommission.nic.in/reports/genrep/wtrsani.pdf).