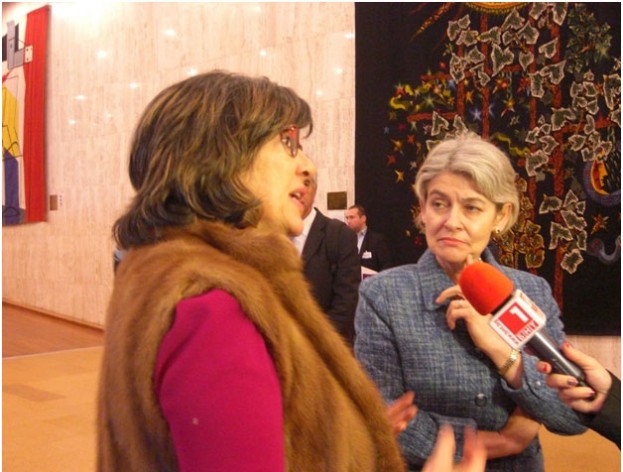 PARIS, Feb 8 2016 (IPS) - “No story is worth dying for.” This comment at a landmark conference on media safety at UNESCO last Friday emphasised the bewilderment the media felt at the brutal slayings of journalists as they carry out their work.

“Today, more and more journalists are being targeted with impunity in every corner of the globe – brutalised, gunned down and done to death by the enemies of press freedom,” said Jim Boumelha, president of the Brussels-based International Federation of Journalists (IFJ).

“The continuing high level of media deaths cries out for more action by international institutions such as the United Nations to force governments to pay more attention to the safety crisis facing journalists and media,” he told the UNESCO meeting, titled “News organizations standing up for the safety of media professionals”.

In a report released shortly before the conference, the IFJ said that some 2,300 journalists and media workers have been killed since 1990, and that more than 95 per cent of the victims died in their own country.

Boumelha said that the world barely takes notes of these killings “unless the life is that of a well-known Western correspondent”.

“The untold story … is that the risks to local journalists, or journalists who report within the borders of their own nation, have never been greater,” he said, adding that murder had become the “easiest and most effective way to silence journalists”.

The IFJ stresses that most journalists are not killed by the hazards of war reporting: “no less than 75 per cent were murdered outright, such as killed by a gunman escaping on the back of a motorcycle, shot or stabbed to death near their home or office, or found dead after having been abducted and tortured”.

Most of the attackers act with impunity as many governments aren’t carrying out effective investigations, said participants at the conference.

“We all share responsibility,” said Erik Bjerager, vice-president of the World Editors Forum, who appealed to governments as well as the public and press bosses to do more to protect media workers.

“Without the power of the state, media can only do so much,” Bjerager said.

UNESCO’s Director-General Irina Bokova told IPS that the issue of impunity, where perpetrators go unpunished, needed to be addressed by UN member states.

As the specialised agency to defend press freedom, UNESCO requests information from governments about “actions taken to pursue the perpetrators of these crimes”. But some states were not submitting the requested updates.

In its 2015 report, “World Trends in Freedom of Expression and Media Development”, UNESCO noted that the response rate was 42 per cent, up from 22 per cent in 2014 but still meaning that 58 per cent of countries were not providing the necessary information.

The IFJ, meanwhile, said that in “no less than 90 per cent of journalist murders worldwide, there has been little or no prosecution whatsoever”.

Many of the 300 participants at the conference, such as veteran journalist Alfred Taban of South Sudan, recounted chilling experiences of harassment and intimidation, including arrests and the closing of newspapers by national authorities.

“There’s no respect for their own constitution [on press freedom],” Taban said. “Government impunity is really rampant”.

Throughout the day-long meeting, media representatives put forward ideas aimed at addressing safety and impunity issues in an international and binding manner.

Groups such as the France-based Reporters Without Borders called for a special representative of the UN Secretary General for the safety of journalists, while a coalition of major newspapers and journalist organizations promoted the endorsement of global freelance protection standards.

Its members and many others at the conference highlighted the particular vulnerability of freelancers, who are often badly paid and left unsupported by the assigning media organization in the event of a crisis.

Diane Foley, a speaker at the meeting, said that when her son James was abducted, the family “felt incredibly alone”.

The American journalist was murdered by his captors in 2014. He had been working as a freelancer to report on the Syrian war when he was kidnapped, and fellow journalist Steven Sotloff, killed the same year, was also a freelancer.

“It’s important that the world understands that more and more battlefields are covered by civilian journalists and freelancers,” Diane Foley said at the UNESCO meeting. “Together we have strength. Individually we don’t … It’s become an increasingly dangerous world.”

“People often don’t realize how much families are affected when freelance journalists are killed,” she said.
“Sometimes they are the main breadwinners, and they leave behind families who need urgent help.”

Such murders are often meant to send a message, and family and friends might find themselves living in fear as well, she and other delegates noted.

For Indonesian editor Yuli Ismartono, a key way forward is to provide what she calls “media literacy” around the world, especially in areas experiencing a rise in extremism.

“Members of the public are our new censors,” said Ismartono, publisher of the English-language version of a popular magazine. “If they don’t like what we cover then we’re attacked indiscriminately.”

She said that her country had transitioned from a repressive society to a democratic one very fast, over the past 15 years. “But what we haven’t done is to educate the public to accept the new freedoms. They don’t understand the role of the media,” she told IPS. “Media literacy is the next step in raising awareness.”