NEW YORK, Apr 9 2016 (IPS) - Regardless of whether they are called fragile, failed, or failing states, scores of countries around the globe are plagued by overwhelming problems with few solutions in sight. Moreover, the instability and dire straits of these countries are spilling across national borders, destabilizing neighboring countries and regions, while posing enormous challenges for international organizations and donors.

While lists of failing states may differ, they include for the most part, the same set of countries. In brief, failing states are unable to provide fundamental societal requirements and basic services to their citizens such as health, education, housing, welfare, employment, security, justice, governance and human rights.

Among the various key factors that can contribute to state failure are poverty, corruption, ineffective governance, crime, violence, forced displacement and sectarian and ethnic conflict. Destabilizing interventions and aggression from abroad are also a part of this toxic mix.

For purposes of this analysis the top 25 states, or the F25 countries, on the 2015 Fragile States Index (FSI) of the Fund for Peace are considered. The index is based on twelve social, economic and political indicators, including demographic pressures, poverty and economic decline, state legitimacy, security, human rights, rule of law, fractionalized elites and external intervention.

Three-fourths of the F25 countries are in Africa, and all except Libya in sub-Saharan Africa. Of the five Asian countries, four of them, namely, Afghanistan, Iraq, Syria and Yemen, are racked by protracted violent armed conflict. The remaining country, Haiti, is the sole failing state in the western hemisphere.

The large majority of the F25 countries – 60 percent – have remained at the highest levels of the FSI for years. For example, Chad, Democratic Republic of Congo, Iraq, Somalia, Sudan and Yemen have been among the top ten highest countries on the index since its inception in 2005. 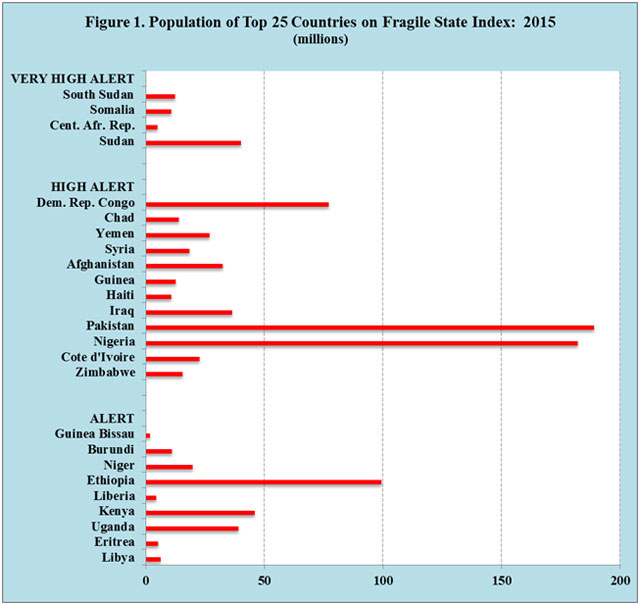 Source: United Nations Population Division and the Fund for Peace. 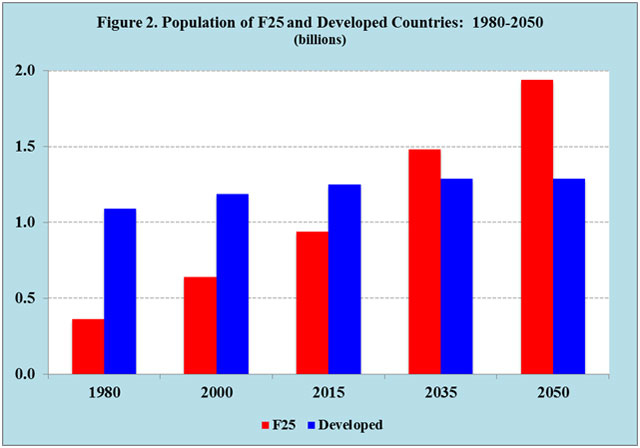 The stark difference in the pace of demographic change between these two groups of countries is illustrated by comparing the populations of Nigeria and the United States. Currently the U.S. population is nearly twice as large as Nigeria’s, 322 and 182 million, respectively.

However, as Nigeria’s current demographic growth is more than triple that of the U.S., Nigeria is projected to overtake the U.S. by mid-century, when Nigeria will have the third largest population in the world, after India and China.

Although the F25 countries have relatively high mortality, with life expectancies at birth below the global average and the majority under 60 years, their rapid population growth is due to high birth rates. Among the F25 countries fertility is usually at least four births per women.

The populations of the F25 countries are also young. In most instances, half of the population is below the age of 18 years. In some of the countries median ages are even lower, such as Niger (14.8 years), Uganda (15.9) and Somalia (16.5).

The F25 countries are the largest generator of refugees. In mid-2015, the top five sources of refugees under the mandate of the United Nations High Commissioner for Refugees (UNHCR), representing more than 60 percent of the 15 million refugees, were: Syria (4.2 million), Afghanistan (2.6 million), Somalia (1.1 million), South Sudan (0.7 million) and Sudan (0.6 million).

A similar picture emerges with regard to internally displaced persons (IDPs). Of the 34 million IDPs in mid-2015 protected or assisted by UNHCR 70 percent were resident in the F25 countries, with just four of them accounting for nearly half of all IPDs: Syria (7.6 million), Iraq (4.0 million), Sudan (2.3 million) and South Sudan (1.6 million).

In addition to refugees and asylum seekers, high unemployment induces significant movements of unauthorized migrants to wealthier nations. Many youth, especially males, from countries such as Democratic Republic of Congo, Eritrea, Haiti, Nigeria and Pakistan are willing to undertake risky and costly trips with smugglers across land and sea to reach their desired destinations.

Desperate to escape war or driven by the hopes of a better life, more than 1 million refugees and economic migrants, an unprecedented number, illegally crossed the borders into Europe last year. Another 3,800, a third of them children, died while crossing the Mediterranean in a vain attempt to reach Europe, making it the deadliest year on record for such deaths.

The international refugee regime or system, which is based on the 1951 Refugee Convention and the 1967 Additional Protocol and implemented by the UNHCR, is being overwhelmed and proving inadequate in dealing with refugees and asylum seekers from failing states. Yet, it is feared that attempts to revise the current refugee regime will undermine rather than improve it.

Such is the case with an agreement struck between the European Union (EU) and Turkey in March 2016. Those migrants who illegally enter Greece from Turkey after March 20 will be deported back to Turkey. In exchange the EU will resettle one Syrian from a camp in Turkey for each Syrian who took an irregular route to Greece, with the maximum number capped at 72,000. Migrants currently in Greece could eventually be moved to other parts of the European Union, if they qualify for asylum.

The migration agreement also calls for Turkey to receive some $6.6 billion from the EU to assist with refugees in Turkey. Also promised is visa-free travel for Turkish citizens in most of Europe by mid-2016, if certain conditions are met, as well as the eventual resumption of negotiations with Turkey on EU membership.

A failing state is not a new phenomenon. In the past, however, the repercussions of a failing state were largely contained within its national borders. With an increasingly interconnected, globalized and mobile world, a failing state has disastrous consequences not only for its own inhabitants, but also for neighboring countries, as well as distant nations as has become disturbingly evident in recent years.

In particular, the surge in the numbers and populations of failing states poses serious dangers to world economic growth, development efforts and international security. The proliferation of failing states creates conditions and breeding grounds under which repressive kleptocracies, transnational crime, external incursions, armed extremists and terrorist groups can thrive and expand, resulting in among other things potential costly and perilous quagmires for foreign powers and regional and international organizations that opt to intervene.

The demographic realities of failing states can no longer be dismissed or postponed by political pronouncements, lofty goals or future promises. In addition to developmental issues such as poverty, employment, health, security, governance and political legitimacy, the international community needs to effectively address the faltering global refugee system and the vexing problem of illegal immigration, including smuggling and human trafficking.

Admittedly, some solutions to the seemingly intractable problems of failing states are being pursued. National, regional and international efforts are underway to improve the lot of failing states.

That no country has yet graduated from being considered a fragile state to a stable one provides little encouragement or optimism that the efforts currently underway will prove sufficient to solve the overwhelming problems of failing states. Clearly, radically new, innovative and comprehensive initiatives are needed in order for countries to transition from a failing to a stable state.