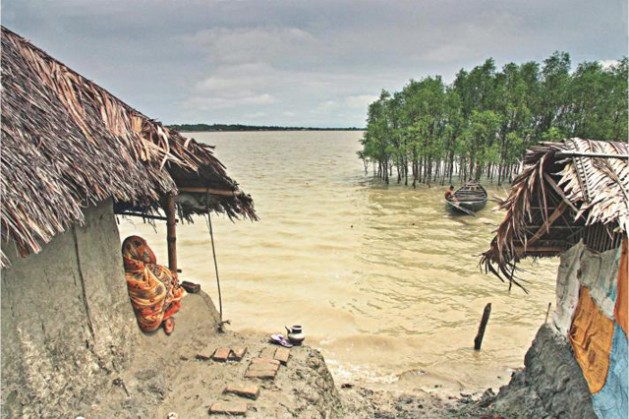 Apr 5 2016 - Climate change is the harsh reality of today, and its impacts are undeniable for nations such as ours. Global warming is leading to unprecedented rise in sea level, and for a low lying nation like Bangladesh, that means widespread inundation. Changing weather patterns are also wreaking havoc on agricultural production which is dependent on regular patterns of rainfall, heat and cold. Frequency and intensity of droughts, floods and cyclones are on the rise. And millions of hapless victims are finding themselves in dire straits.

Bangladesh contributes very little to global warming – its emissions being less than 0.35% of the global total. But as countries around the globe continue to emit millions of tons of carbon, the impacts of climate change will keep worsening for Bangladesh. It was labeled as the most climate vulnerable nation according to the Climate Change Vulnerability Index (CCVI-2011), which calculated the vulnerability of 170 countries to the impacts of climate change over the next 30 years. According to the Asian Development Bank’s estimates, climate change may cost Bangladesh a 2% loss of GDP annually by 2050.

The impacts of climate change that vulnerable nations such as Bangladesh are experiencing today are primarily the results of historic emissions by developed nations during their path to development, but paying the blame game will get us nowhere. Making a stand against climate change today requires concerted effort by all states. Recognising this need for global action, developing and developed countries have made public pledges known as Intended Nationally Determined Contributions (INDCs) to fight climate change at their national level, in the largest international climate conference- COP 21- last year. As Bangladesh’s emissions are minimal and adaptation needs are extensive, the most important element of Bangladesh’s INDCs is the support the country needs or will provide to aid the vulnerable populace adapt to climatic impacts. In order to so, Bangladesh is not only prioritising adaptation measures that aid mitigation, but is also aiming to minimise the carbon footprint of adaptation interventions. To make sure its INDCs are implemented, the country has undertaken commendable policies and interventions.

Bangladesh submitted its revised National Adaptation Programme of Action in 2009 and was the first country to develop a Climate Change Strategy and Action Plan – a coordinated plan of action for combating climate change. Moreover, the country has prepared a roadmap for a comprehensive National Adaptation Plan (NAP), with the aim of facilitation the integration of climate change adaptation into national policies, development planning processes and strategies.

The Bangladesh government has invested over $10 billion over the last thirty years to increase climate change and disaster resilience, and allocates 6-7 per cent of its annual budget (around $1 billion) for adaptation. The government has established the Bangladesh Climate Change Resilience Fund (BCCRF) with support from international development organisations and the Bangladesh Trust Fund (BCCTF) using $400 million of its own money. The BCCTF has funded over 230 local adaptation projects so far, which include construction of cyclone resilient housing, sluice gates, waste management and drainage infrastructure, excavation of canals, introduction and dissemination of drought tolerant seeds, installation of solar panels and afforestation.

As recognition of the efforts to fight climate change, and the vision to turn Bangladesh into a developed nation by 2041 through implementing environmentally aware policies, Prime Minister Sheikh Hasina received the United Nation’s Champion of the Earth award last year. “Through a number of forward-looking policy initiatives and investments, Bangladesh has placed confronting the challenge of climate change at the core of its development,” said UNEP Executive Director Achim Steiner. “As an early adopter and advocate of climate change adaptation policy, Prime Minister Sheikh Hasina continues to be an example to follow.”

Through its innovative policies and proactive measures to implement its INDCs, Bangladesh is leading the path for climate change adaptation for vulnerable developing nations. But no level of adaptation will be enough in the long run unless greenhouse gas emissions are reduced significantly, as developed nations have pledged. Now it is time for them to turn their promises to actions, and build a global resistance to prevent catastrophic climate change in a last stand to save Mother Earth.