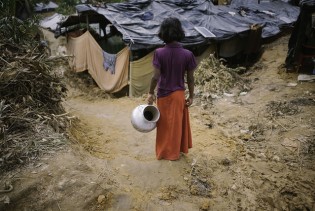 By Sohara Mehroze Shachi
All his life, farmer Nasiruddin saw his poverty ridden village in complete darkness after dusk, with electricity being a distant dream. That changed last year when he installed a solar lantern system.

By Sohara Mehroze Shachi
Climate change is the harsh reality of today, and its impacts are undeniable for nations such as ours. Global warming is leading to unprecedented rise in sea level, and for a low lying nation like Bangladesh, that means widespread inundation. Changing weather patterns are also wreaking havoc on agricultural production which is dependent on regular patterns of rainfall, heat and cold. Frequency and intensity of droughts, floods and cyclones are on the rise. And millions of hapless victims are finding themselves in dire straits.

By Sohara Mehroze Shachi
With multiplying impacts of climate change - increasing floods, cyclones, and drought - thousands of climate refugees are migrating to Dhaka. And the city, well beyond its carrying capacity, is bursting at the seams.
ADVERTISEMENT ADVERTISEMENT