West Papuans Turn to Africa for Support in Freedom Bid 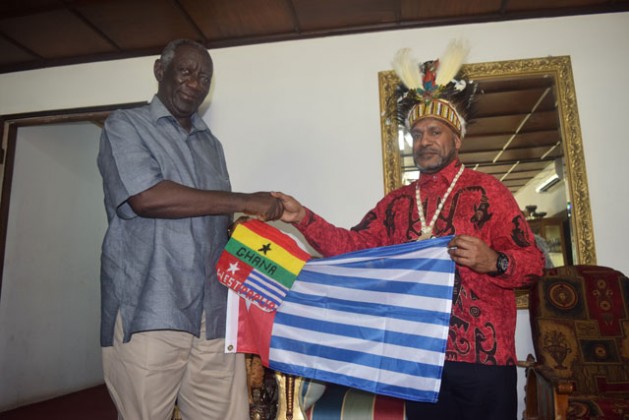 CANBERRA, Australia, Apr 30 2016 (IPS) - For more than half a century, the indigenous people of West Papua, located on the western side of the island of New Guinea, who are related to the Melanesians of the southwest Pacific Islands, have waged a resistance to governance by Indonesia and a relentless campaign for self-determination.

But despite regular bloodshed and reports of systematic human rights abuses by national security forces, which have taken an estimated half a million West Papuan lives, the international community has remained mostly unwilling to take concerted action in support of their plight.

Now Benny Wenda, a West Papuan independence leader who has lived in exile in the United Kingdom since 2003, is driving a mission to build the support of African states. Following a visit to Senegal in 2010 and two visits to South Africa last year, Wenda was welcomed at the 59th Independence anniversary celebrations in Ghana in March this year.

“There has been widespread attention and further pan-African solidarity for West Papua renewed following my diplomatic visits to these African countries, both at parliamentary and grassroots levels,” Wenda told IPS.

‘We are honoured to fight for your people. We share a similar history. It is no surprise to me that you had support from Ghana at the UN in 1969 and that we accepted West Papuan refugees in the 1980s,’ Jerry John Rawlings said to the Ghanaian media.

The alliance which Wenda is forging is based on a sense of shared historical experience.

“Africa is the motherland to all people and we Melanesians feel this strongly….our affinity primarily lies in our shared ancestral heritage, but also in our recent history because Africa has also suffered the brutalities of colonialism,” Wenda said.

Following decolonisation of the Dutch East Indies, Indonesia gained independence in 1949, but there was disagreement between the Netherlands and Indonesia about the fate of Dutch New Guinea, which the former was preparing for self-determination. A United Nations supervised referendum on its political future, named the ‘Act of Free Choice,’ was held in 1969, but less than 1 per cent of the region’s population was selected to vote by Indonesia, guaranteeing an outcome for integration, rather than independence.

At the time, Ghana and more than a dozen other African states were the only United Nations members to reject the flawed ballot.

‘I’m shocked to learn that West Papua is still not free. I call on the United Nations and all the relevant bodies, please, do what is right, as they know, for West Papua,’ Tutu said in a public statement.

The momentum continued when the Nigeria-based non-government organisation, Pan African Consciousness Renaissance, held a pro-West Papua demonstration outside the Indonesian Embassy in Lagos in April 2015.

Indonesia’s refusal to recognise secessionist aspirations in its far-flung troubled region is often attributed not only to concerns about national unity, but the immense mineral wealth of copper, gold, oil and natural gas which flows to the state from ‘West Papua’, the umbrella term widely used for the two Indonesian provinces of Papua and West Papua.

Since coming to power in 2014 populist Indonesian President, Joko Widodo, has vowed to increase inclusive development in the region and called on security forces to refrain from abusive measures, but the suffering of West Papuans continues. In May last year, there were reports of 264 activists arrested by police ahead of planned peaceful protests. Twelve Papuans were shot by security forces in Karubaga in the central highlands in July, while in August three people were abducted and tortured by police in the Papuan capital, Jayapura, and two shot dead outside the Catholic Church in Timika.

West Papua’s political fate stands in contrast to that of East Timor at the end of last century. East Timor, a Portuguese colony militarily annexed by Indonesia in 1975, gained Independence in 2002. The positive result of an independence referendum in 1999 was widely accepted and further supported by a multi-national peacekeeping force when ensuing violence instigated by anti-independence forces threatened to derail the process.

But in the political climate of the 1960s, Wenda says “West Papua was effectively handed over to Indonesia to try and appease a Soviet friendly Indonesian government….our fate was left ignored for the sake of cold war politics.” Now Indonesia staunchly defends its right of sovereignty over the provinces.

In the immediate region, West Papua has obtained some support from Pacific Island countries, such as the Solomon Islands, Tonga and Vanuatu which have voiced concerns about human rights violations at the United Nations.

And last year the Melanesian Spearhead Group, a sub-regional intergovernmental organisation, granted observer status to the United Liberation Movement for West Papua coalition. However, Indonesia, a significant trade partner in the Pacific Islands region, was awarded associate membership, giving it an influential platform within the organisation.

“Luhut Pandjaitan’s [Indonesia’s Presidential Chief of Staff] recent visit to Fiji suggests that Indonesia is continuing its efforts to dissuade Pacific states from supporting West Papua and is willing to allocate significant diplomatic and economic resources to the objective,” Dr Richard Chauvel at the University of Melbourne’s Asia Institute commented to IPS.

In contrast to Indonesia’s Pacific Island neighbours, Dr Chauvel continued, “African states mostly do not have significant trade, investment, diplomatic and strategic interests with Indonesia and do not have to weigh these interests against support for the West Papuan cause at the UN or elsewhere.”

How influential south-south solidarity by African leaders will be on West Papua’s bid for freedom hinges on whether championing words translate into action. In the meantime, Benny Wenda’s campaign continues.