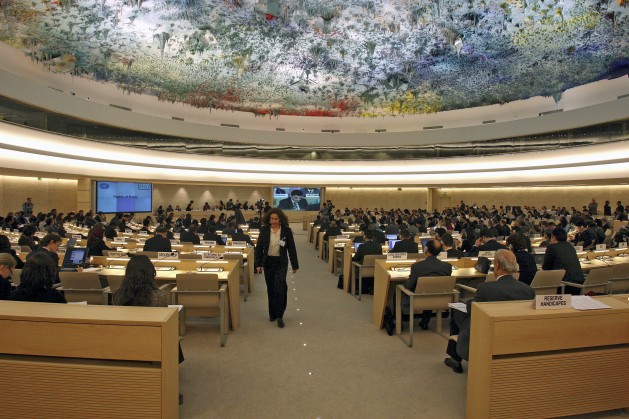 UNITED NATIONS, Apr 27 2016 (IPS) - Last August, Balla Hadji, a 61-year-old truck driver in Bangui in the Central African Republic, was having breakfast with his wife when they heard shots outside. He ran out to call his daughter inside, but troops were already there, and shot him in the back as he ran away. His 16-year-old son, Souleimane, was also shot when he ran towards his father. Balla died on the spot, his son Souleimane the next day.

The soldiers were neither armed groups nor government forces; they wore the famous blue helmet and vest of United Nations (UN) peacekeepers. Witnesses told Amnesty International that instead of helping the wounded father and son, the peacekeepers – who were meant to protect them – fired another round when the daughter tried to cross the street to reach her injured relatives.

What happened to an organization meant to protect and give voice to the world’s most vulnerable people? This is a question that candidates to succeed UN Secretary-General Ban Ki-moon must address in the process that started at the UN General Assembly earlier this month. In the coming months governments will select the UN’s next leader – who will take up their post in 2017.

This is a crucial turning point for a twentieth century body being shoe-horned into the twenty-first.

The UN showed it can still deliver when it brokered agreements on development and climate goals in 2015, but its response to major crises was woefully inadequate. From its failure to protect civilians in conflicts like Syria and South Sudan to abuses perpetrated by its own forces, the UN is an organization creaking at the seams.

This is largely the fault of governments willfully thwarting UN action aimed at preventing war crimes and crimes against humanity or holding perpetrators to account. The UN Security Council appears less a place where people’s security and rights are protected than a forum where the richest and most powerful countries in the world play politics with their lives.

Four times a Security Council member has vetoed UN efforts to respond to the Syrian conflict. The result: nearly 12 million forced to flee their homes, and more than 250,000 dead.

At the Human Rights Council, Saudi Arabia’s western allies did its bidding, obstructing the establishment of a UN-led inquiry into violations by all sides in the conflict in Yemen, even while the Saudi-led coalition’s bombing campaign commits war crimes. The result: a conflict that has taken the lives of more than 2,800 civilians, 700 of them children.

Even when the Security Council has acted and imposed sanctions and arms embargoes they have not been implemented effectively, for example in Sudan.

This cannot go on. I have seen the consequences on the ground in countries like Syria and Yemen: thousands detained, killed, displaced, and disappeared. When the victims and their families ask me if there is an organization that can help them, I know the answer should be the UN. Today I cannot look them in the eye and promise it will.

Failure to protect human rights will sow the seeds of future crises by fueling the injustice and repression that breed instability. Look at the uprisings in the Arab world five years ago, a palpable example of the link between system failure and governments repressing dissent and human rights.

The UN has not failed, yet. But its ability to fulfill its purpose is in grave jeopardy. The governments who select the next Secretary-General have to answer the critics who question whether the organization is fit for purpose in the twenty-first century.

The world needs someone who will champion marginalized people, protect civilians in conflict and prevent mass violations, combat impunity by supporting the International Criminal Court, fight for gender equality, defend activists against repressive governments and deal with the biggest global refugee crisis in seventy years.

That is a tall order, but essential in a world racked by proliferating conflict, deliberate targeting of civilians by states and armed groups, and rising xenophobia.

The next Secretary-General can do that by putting the protection of human rights front and centre. Human rights are meant to be the UN’s third pillar, along with development, and maintaining peace and security. But they risk becoming the third rail of UN politics: too controversial to touch, and a black mark in the eyes of certain Security Council members.

The next Secretary-General must also restore the reputation of an organisation tarnished by sexual exploitation and abuse committed by its own peacekeepers. The UN’s own statistics show 69 allegations of abuse in 2015, 22 of them from its peacekeeping force in the Central Africa Republic. The UN must make sure peacekeepers are punished when they turn predator.

But a critical first step is to have a fair and transparent process to select a highly qualified next leader for the UN. In the past, powerful governments who felt a strong Secretary-General was not in their interest have had too much control over the final decision. The debates held earlier this month kick started a vital opportunity for governments to reinvigorate the UN.

The election of the UN Secretary-General this year may capture a fraction of the attention of the US presidential campaign. Yet for much of the world who stand to benefit from a dynamic UN, it could be just as significant. If not more.

Anna Neistat is Senior Director for Research at Amnesty International. She has conducted more than 60 investigations in conflict areas around the world, including Syria, Afghanistan, Pakistan, China, Zimbabwe, Nepal, Kenya, Yemen, Chechnya, Sri Lanka and Haiti. Follow her @AnnaNeistat