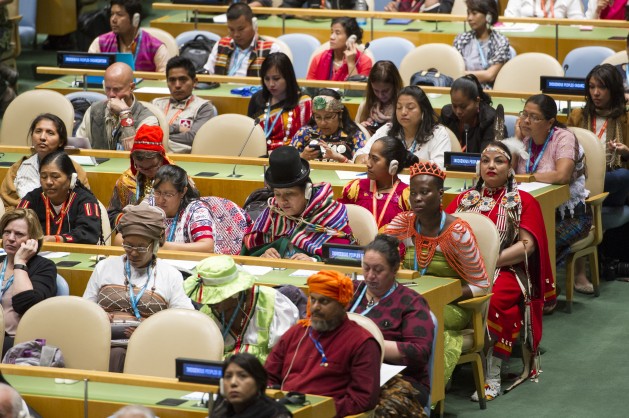 Opening of the Fifteenth session of the Permanent Forum on Indigenous Issues. UN Photo/Rick Bajornas.

The annual two-week forum has brought together over 1000 participants from around the world to discuss issues of conflict, peace, and resolution and its implications on indigenous communities.

On its first day, a group of delegates came together during a side event to focus and raise awareness of the theme in the context of Asia.

Approximately two-thirds of the world’s indigenous population lives in Asia, making it the most culturally diverse region in the world. Among the increasingly major challenges in the region is militarisation and the denial of indigenous self-determination and rights to land.

Home to 11 indigenous groups, Bangladesh’s Chittagong Hill Tracts (CHT) continues to be one of the most militarized areas in the world.

According to the International Work Group for Indigenous Affairs (IWGIA), an estimated one-third of the Bangladesh Army is in the CHT, an area that only accounts for one percent of the country’s total population and nine percent of land mass.

The military bases were initially established due to a two-decade war between the Government of Bangladesh and Parbatya Chattagram Jana Sanghati Samiti (PCJSS) over indigenous rights and the region’s autonomy.

“After their deaths, [the paramilitary] said that we had to evacuate in two days and if we didn’t, we would all be massacred." -- Josephine Pagalan.

Despite a 1997 peace accord which included commitments to withdraw military troops and self-governance, military presence and de facto control persist.

“Almost 18 years have passed and major commitments have not been fulfilled,” said Secretary-General of the Bangladesh Indigenous People’s Forum Sanjeeb Drong during the event.

Drong stressed that indigenous communities are not against the military, but they do not support military rule.

“The military can be there, but civil government will rule the area,” he stated. However, this has not been the case in CHT as indigenous institutions continue to be invalidated, he added.

An appointed Special Rapporteur Lars Anders-Baer also expressed concern in a report over the failure to implement the agreement and the continued deployment of armed forces in the region.

“The lack of substantial progress is leading to an increasing sense of frustration and disillusionment among the indigenous peoples in the region,” the report states.

“Adding fuel to the dwindling faith in the Government’s sincere intent or political ability to fully implement the accord are developments and initiatives that violate or go against the spirit of the accord,” Anders-Baer adds.

Beyond forced evictions of indigenous residents and illegal land leases to non-local individuals, Drong stated that the military’s involvement in the tourism industry has contributed to the expropriation and destruction of indigenous lands in CHT.

Sena Kalyan Sangstha (SKS), the business wing of the Bangladesh military, is a key player in real estate construction and management. With the help of government subsidies and funds earned from UN peacekeeping missions, the group operates luxury resorts including the Nilgiri resort in CHT. During its construction, the army reportedly tore down a local indigenous group’s orchard as well as shops and a nearby school.

The island is particularly known for its mineral resources including copper and gold. As a result, Mindanao host 60 percent of the Philippines’ armed forces excluding paramilitary groups, she noted.

The southern Philippines is also is home to the majority of the country’s indigenous groups, collectively called the Lumads.

The country’s military have forcefully evicted and displaced numerous Lumad residents, which many believe are aimed to protect and allow the expansion of large-scale mining industries.

The military has also been involved in the massacre of indigenous leaders.

Pagalan, who witnessed the event, recalled the incursion by a paramilitary group, stating: “Last September 1st, at 3:30 in the morning, we were forced awake and forced to leave our houses…all 150 of us.”

In front of her, the group stabbed the Executive Director of a Lumad school Emerico Samarca multiple times along with indigenous leader Dionel Campos and his cousin Aurelio Sinzo.

“After their deaths, [the paramilitary] said that we had to evacuate in two days and if we didn’t, we would all be massacred,” she told attendees.

The event reportedly sparked the evacuation of almost 3,000 Lumads.

Just a month prior to these attacks, Human Rights Watch reported that Philippine government soldiers killed five members of a Lumad family, including children ages 13 and 17, reflecting larger, systematic violations of human rights.

President Benigno Aquino III denied any wrongdoing, stating that “there is no campaign to kill Lumad people, we are serving the people.”

Pagalan urged for government accountability and justice for affected indigenous peoples, including the return of ancestral lands.

Bangladeshi politician and activist Devasish Roy especially highlighted the need for justice in CHT at a press briefing Monday, stating: “We really need to look at peace…with justice as a necessary part of it. You can have the cessation of hostilities…but [it] doesn’t mean that’s real resolution.”

Carling expressed her hope to IPS that the UNPFII will particularly raise awareness among member states to respect and enforce conflict resolution and indigenous rights.

“Unless states take this matter seriously and have the political will to address the issue of militarisation…then we cannot expect much of any improvement in the situation.

UN Secretary-General Ban Ki-moon, in a video message during the opening of the forum, announced the launch of a system-wide action plan for coherent and coordinated action on indigenous issues.