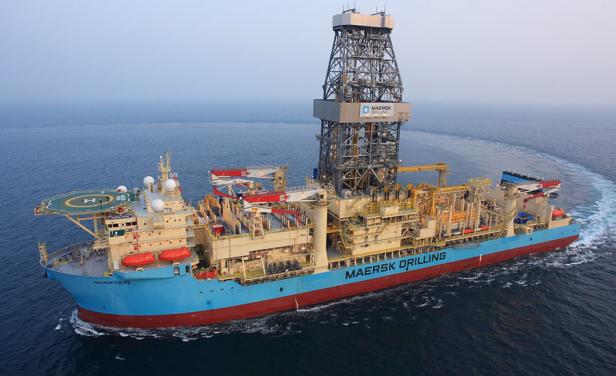 The Maersk Venturer drillship, which is drilling the Raya-1 well that set a new world record in terms of water depth, and will determine the existence of commercially viable oil and gas reserves on Uruguay's continental shelf. Credit: Ancap

MONTEVIDEO, Jun 9 2016 (IPS) - Uruguay is just weeks away from finding out if it will have a chance to stop being totally reliant on oil imports at some point in the future, when the first offshore exploration well in national waters – which set a new world record in terms of water depth – is completed.

Since Mar. 30, the consortium headed by France’s Total has been prospecting 250 km from the Atlantic coast, in more than 3,400 metres of water, and 3,000 metres below the seabed.

The Raya-1 well in Block 14, drilled with an investment of some 200 million dollars in ultra-deep waters on the continental shelf, is hunting for commercially viable oil or gas reserves.

On Thursday Jun. 8, the representative of Total in the country, Artur Nunes da Silva, said the drilling would be done in about two weeks and the samples would be sent to France for analysis. Only then, he said, would the results be announced.

The next day, the local media reported that, according to information from the industry, only water was found in Raya-1, although that did not fully rule out the existence of oil and gas on the continental shelf.

The drilling represents a major turning-point for this South American country of 3.4 million people, because it will soon know if it has a future as an oil producer. The effort to find oil here was not stalled by the oil-price crisis, which has discouraged investment at a global level, especially in high-risk ventures such as deepwater drilling.

“When the current drop in prices began, most of the contracts had already been signed,” Víctor Bacchetta, a journalist who specialises in environmental issues and who edits Uruguay’s Mining Observatory publication, told IPS.

The contracts form part of the goals set by the Ministry of Industry, Energy and Mining’s 2005-2030 energy policy, which, although it puts a priority on strengthening renewable energies, also paves the way for exploration and prospecting for oil and natural gas.

The state oil company Ancap is responsible for implementing the policy, which also requires attempts at participating in joint ventures for exploring deposits in other countries.

Geologist Ethel Morales told IPS that the first attempts to find fossil fuels in Uruguay dated back to the 1950s, when exploratory wells were drilled in the Northern Basin, which covers some 90,000 sq km in this country of 176,220 sq km. 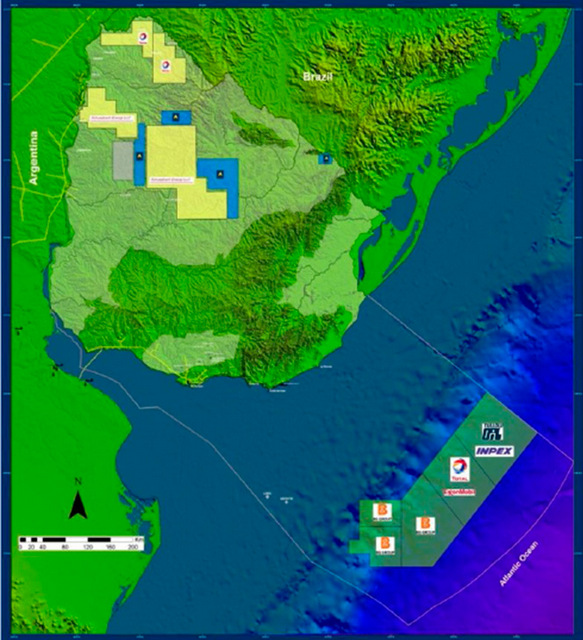 A screenshot from a presentation by geologist Ethel Morales, showing the contracts granted so far on Uruguay’s continental shelf, to the right. The second from the top is Block 14, awarded to French oil major Total. Credit: Uruguay Round

Exploratory wells were also drilled on the continental shelf in the 1970s, said Morales, a professor at Uruguay’s University of the Republic. But shallow water prospecting ended in 1976, after two wells were declared dry.

Besides the energy policy itself, Morales said another factor that fuelled offshore exploration was the appearance of the so-called pre-salt deposits, located beneath a two-kilometre-thick salt layer under rock, sand and deep water, to the north of this country’s continental shelf, off the coast of Brazil.

These huge deposits drew the oil corporations’ attention to the South Atlantic. Morales said Brazil’s Santos basin, where the pre-salt deposits are located, and the Uruguayan basin “share the same origins,” although their later evolution was different.

In this context, Ancap began to search for partners to drill exploratory wells in Uruguayan waters, although its spokespersons stress that the chances of finding commercially viable reserves stand at just 15 percent. 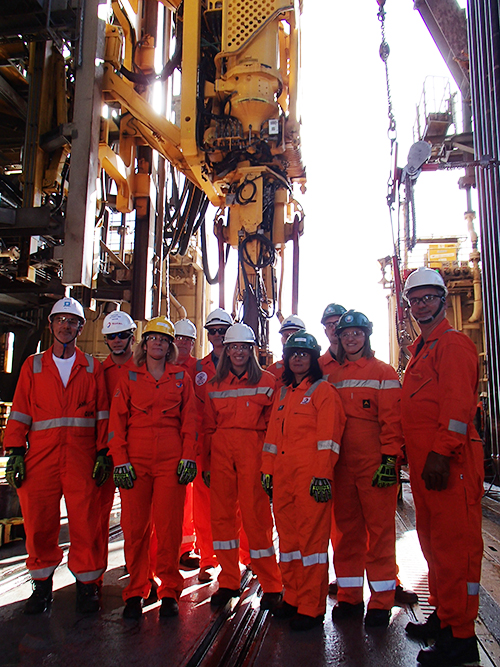 Uruguayan Minister of Industry, Energy and Mining Carolina Cosse (3rd-left) with high-level officials from the state oil company Ancap, during their visit to the drillship that is exploring for oil in ultra-deep waters 250 km off the coast of Uruguay. Credit: Ancap

The Uruguay Round 1 bidding process was launched in 2009, offering continental shelf blocks, followed in 2011 by Round 2, in which eight contracts were signed, including the one with Total.

“Up to 2012 there was no 3D (tridimensional) seismic, and now we have nearly 40,000 sq km covered in the area of greatest prospectivity, which reflects a quantitative and qualitative leap with respect to the information available,” Ancap reported in late 2015.

Oil industry analysts stress the participation in the exploration here of the world’s leading oil companies, and note that the contracts assign a large proportion of the profits to the Uruguayan state.

Ancap and the Ministry of Industry decided to launch Uruguay Round 3, whose chief aim is the same: to determine whether there is oil and gas on the continental shelf, and if there is, whether it is commercially viable.

Total’s partners in Block 14 are the U.S. ExxonMobil (which has a 35 percent share) and Norway’s Statoil (15 percent), and the state will take 70 percent of the earnings, if the presence of light crude reserves is confirmed.

It could take up to six years before the start of commercial production of oil or gas, according to Total.

The oil companies granted contracts in the two bidding rounds held so far have invested a combined total of up to one billion dollars in exploration and prospecting.

The most important thing, in Ancap’s view, is that “after a period of nearly 30 years with no exploration” for fossil fuels, the oil companies are interested in investing in Uruguay, at their own expense and risk.