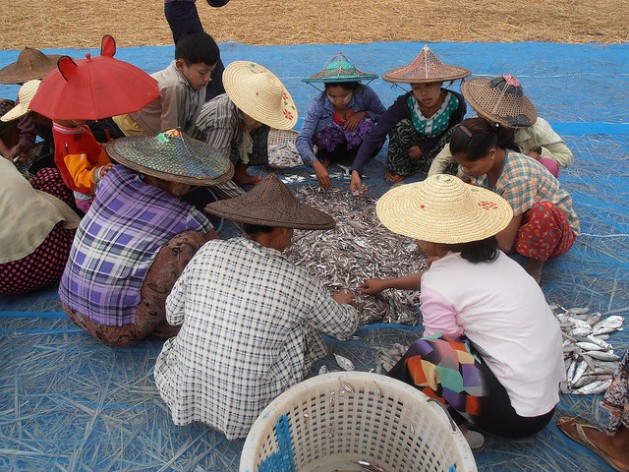 Villagers sort the morning catch in Myanmar's southern Rakhine State. The area is being considered as a possible site for a project by IUCN focused on water, food and biodiversity. Credit: Guy Dinmore/IPS

YANGON, Jun 9 2016 (IPS) - International aid agencies, big and small, are beating a path to Myanmar, relishing the prospect of launching projects in a nation of 51 million people tentatively emerging from more than five decades of military rule.

Nay Pyi Taw, the grandiose but forlorn capital built in the dry-zone interior by the military junta 10 years ago, is starting to see flights filled with prospective aid workers, diplomats and businesses coming to lobby newly appointed ministers. Predictably, the elected civilian government, which took office in late March, is already under strain. Some ministries are still in the throes of reorganising following major reshuffles and mergers aimed at cutting costs.

Aung San Suu Kyi, the Nobel Peace laureate who is de facto head of government while barred by the constitution from holding the presidency, has a reputation among established aid workers in Yangon for harbouring considerable scepticism towards the development world. But a recent meeting with heads of UN agencies went well, with participants saying they were pleasantly surprised to be listened to and not receive a lecture.

Her scepticism is justified on some fronts. The aid effort during the past five years of quasi civilian rule was disjointed and often wasteful. Rents were driven up in Yangon and the private sector lost qualified staff to higher paying NGOs, even if it was good news for the bars and restaurants that open weekly.

Not all blame can be laid at the foot of the aid world, however. For example, international de-mining organisations have not been able to clear a single landmine over the past four years, despite Myanmar being one of the world’s most mined countries. But this is because the military and the ethnic armed groups locked in decades-long civil wars have failed to reach necessary agreements.

However, the military, known as the Tatmadaw, still holds powerful levers, including control of three key ministries. This poses a risk to prospective development partners as not all aid projects will be able to go ahead, even if the civilian side of the government agrees.

“A new era is starting with a lot of economic development and a new government that puts environment on the agenda, opening up a lot of opportunities,” Marion van Schaik, senior policy advisor for water and environment for the Dutch foreign ministry, told a workshop in Yangon this week held by the Netherlands Committee of the International Union for Conservation of Nature (IUCN).

“We need to help Myanmar get on the road of sustainable development,” she said. 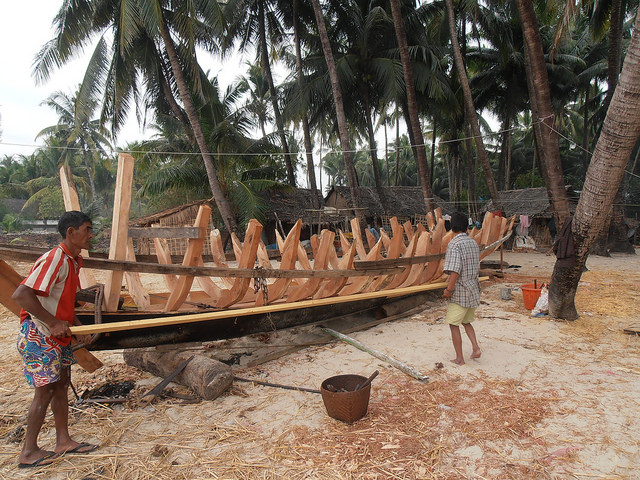 Rather than following the top-down approach of bigger agencies, IUCN Netherlands held the three-day workshop with Myanmar Environmental Rehabilitation-Conservation Network (MERN), an alliance of 21 local NGOs, to analyse development needs. The primary aim was to identify one or two “landscapes” where projects would focus on strengthening the capacity of civil society organisations in public advocacy and lobbying.

This would include training for CSOs in dealing with the private sector, understanding financial flows and making such decisions as whether to “dialogue” with concerned businesses or resort to the courts – a risky undertaking in Myanmar where corruption in the judiciary is widespread.

Professor Kyaw Tint, chairman of MERN and a former director general of the Myanmar Forest Department, said in his opening address that the network aimed to be a strong voice on environmental issues promoting public awareness.

Speaking to IPS, the retired civil servant who worked under the former military junta said he was confident the new government would be staffed with more competent experts rather than being packed with military personnel as in the past. He particularly welcomed the commitment to tackling widespread corruption.

Carl Koenigel, senior expert on ecosystems and climate for IUCN Netherlands, said the Myanmar program known as “Shared Resources, Joint Solutions” in partnership with WWF Netherlands, was financed under the Dialogue and Dissent program of the Dutch foreign ministry, with funding of one million euros over five years. The aim is to safeguard “international public goods” in food security, water provisioning and climate change resilience.

IUCN Netherlands has similar projects in 16 countries, including the Philippines, Indonesia and Cambodia.

Mining, dams and agri-business were a focus of the first day of discussions as participants sought to identify geographical areas and issues where projects could have the best chance of success. A points-based ranking system was used with groups allocating marks under various headings, including climate change impact, biodiversity loss, risks to water and food supplies, and the consequences of such sectors as mining, infrastructure and agri-business.

Given conflicts between the Myanmar military and ethnic armed groups around the country’s diverse frontier regions, part of the conversation focused on whether goals were achievable in such a context, and at what risk.

Kachin State in Myanmar’s far north is home to some 100,000 civilians living in IDP camps since renewed fighting between the military and the Kachin Independence Army erupted in 2011. The stakes are high in the resource-rich state. The township of Hpakant boasts the most valuable jade mines in Asia that have devastated the environment while producing revenues worth billions of dollars a year, although a relatively small proportion reaches government coffers.

China’s multi-billion-dollar project to build the giant Myitsone hydro-power project, suspended by the previous military-backed government, hangs over the future of Kachin, with the new government under Chinese pressure to restart work, despite concerns to the environment and the danger of further fuelling ethnic conflict. Pollution of waterways through gold mining, deforestation due to illegal logging, opium poppy cultivation and rampant drug abuse, plus expanding agribusiness complete the picture.

With the KIA regarded as an illegal armed group, formal dealings under areas it controls could result in prosecution under Myanmar’s “unlawful association” law. This means in effect that many foreign aid agencies may find themselves confined to working in government-controlled territory.

Similar concerns were expressed over the difficulties of working in the western state of Rakhine, where the minority Muslim community of some one million people lives under government-enforced segregation from the Buddhist majority, with limited freedom of movement and access to public services.

The first day of discussions narrowed a shortlist of possible “landscapes” to working within Kachin State, the southern delta area of Ayeyarwady (linked to Kachin by the Irrawaddy river), and the far southern region of Thanintharyi. The latter is one of the most bio-diverse areas in southeast Asia, but threatened by mining and major infrastructure projects, including a planned Chinese oil refinery, a deep-sea port backed by Japan and the development of trans-Asian highways linking to Thailand and beyond. The expansion of agribusiness through companies linked to the former military regime, particularly in rubber and palm oil, has also resulted in extensive deforestation.

Despite its relatively small budget, IUCN Netherlands points to the possibility of bringing about meaningful change through well targeted advocacy, citing the example of a project in Cambodia linked to the drafting of a new forestry law with nationwide implications. Projects in Myanmar should avoid being a “drop in the ocean”, Koenigel said.