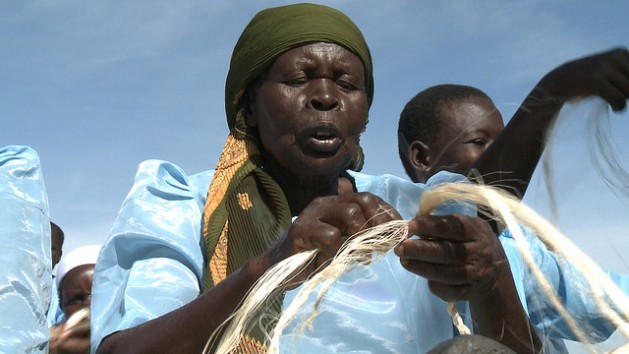 NAIROBI, Jun 27 2016 (IPS) - Seventy-three-year-old Dorcus Auma effortlessly weaves sisal fronds into a beautiful basket as she walks the tiny path that snakes up a hill. She wound up her farm work early because today, Thursday, she is required to attend her women’s group gathering at the secretary’s homestead.

Except for their eye-catching light blue dresses and silky head scarfs, they would pass for ordinary village women. They are part of the Kagwa Women’s Group in the remotest part of Homa Bay County in Kenya’s lake region.

Auma joined the group in 2008 when the care of her three grandchildren was thrust upon her shoulders.

“HIV/AIDS robbed me of my three children, leaving me with the burden of having to take care of three children left in a vulnerable condition,” says Auma.

With no steady income to provide for their basic needs, she joined other women who shared the same predicament.

UNAIDS says that microfinance can play a big role in helping households affected by the HIV/AIDS pandemic, and the women’s group at Homa Bay has proved this to be true.

Composed of 28 members, it started as a merry-go-round, which is a self-help group that helps women to save money. The group is supported by World Vision through an initiative to enhance target households through cooperatives.

“Within economic strengthening we are trying to help the families to get economically empowered through the locally available resources. This is a group of old women, they are all grandmas, and they had already started doing their own merry go-rounds. We came in with training on village savings and loaning, which is a simplified model of the savings at the rural level – it’s like a rural bank,” says Jedidah Mwendwa, a technical specialist with APHIA II Plus (pdf), one of the implementing organizations.

Most of the members are grandmothers whose children died from HIV/AIDS, and hence were left to fend for their grandchildren.

“Since the grannies cannot engage in vigorous economic activities, they were introduced into saving and loaning at their own level. They agreed to raise monies for saving and loaning among themselves through locally available resources like making ropes, baskets and mats,” says Mwendwa.

“When they meet on Thursdays, they collect all their material contributions. One of their members is sent to the nearby market, which is Oyugis, a distance of 61km, to go sell their products and the following week, the money that came from the market is what is saved for each specific member,” says Mwendwa.

The savings are rotated to individual members on an annual basis, and since they do not have a secure place to keep the money, they usually loan out the entire collected amount to members who return it with one percent interest.

“Since I joined this group, my life has changed. I have been able to engage in sustainable farming. My grandchildren have a reason to smile as they have nutritious food on the table,” says Auma, as she gives instructions to her eldest grandchild, a 16-year-old girl, on how to separate the sisal strands.

Initially, local people were a bit reluctant to attend the HIV caretaker training sessions because of the real stigma associated with the illness, but most have come around, and their efforts are paying off.

“We offer to the group and school clubs sensitization on adherence and nutrition,” says Rose Anyango, a social worker in the county. “The women and the children are responding well and the stigma no longer exists. Through village savings and loaning they are able to feed their children as well as educate them.”

The group has seen immediate successes in behavior, attitudes and practices regarding cultural dictates and inclusion of people living with HIV/AIDS in development activities. Women are now actively taking the lead in economic empowerment, enabling them to support their families.

The group now plans to increase to increase its impact by involving more members from the surrounding community, which will go a long way in not only empowering of locals but also reduce the stigma of HIV/AIDS.