Climate Victims – Every Second, One Person Is Displaced by Disaster

Land degradation - Sustainable land management: do nothing and you will be poorer. Credit: UNEP

ROME, Jul 27 2016 (IPS) - Climate change and related extreme weather events have devastated the lives and livelihoods of tens of millions of most vulnerable people worldwide– by far exceeding the total of all the unfortunate and unjustifiable victims of all terrorist attacks combined. However, the unstoppable climate crisis receives just a tiny fraction of mainstream media attention. See these dramatic facts.

“Every second, one person is displaced by disaster,” the Oslo-based Norwegian Refugee Council (NRC) reports. “In 2015 only, more than 19.2 million people fled disasters in 113 countries. “Disasters displace three to ten times more people than conflict and war worldwide.”

As climate change continues, it will likely lead to more frequent and severe natural hazards; the impact will be heavy, warns this independent humanitarian organisation providing aid and assistance to people forced to flee.

“Climate change is our generation’s greatest challenge,” says Jan Egeland, Secretary General of the Norwegian Refugee Council, which counts with over 5,000 humanitarian workers across more than 25 countries.

The climate refugees and migrants add to the on-going humanitarian emergency. “Not since World War II have more people needed our help,” warned the secretary general of the Norwegian Refugee Council Jan Egeland, who held the post of UN undersecretary general for Humanitarian Affairs and Emergency Relief (2003-2006).

Egeland –who was one of the most active, outspoken participants in the World Humanitarian Summit (Istanbul May 23-24)– also stressed that the humanitarian sector is failing to protect civilians.

“I hope that world leaders can ask themselves if they can at least stop giving arms, giving money to those armed groups that are systematically violating the humanitarian law, and bombing hospitals and schools, abusing women and children,” he said to IPS during the World Humanitarian Summit.

For its part, the International Organisation for Migration (IOM) forecasts 200 million environmental migrants by 2050, moving either within their countries or across borders, on a permanent or temporary basis. Many of them would be coastal population.

On this, the United Nations Environment Programme (UNEP) warns that coastal populations are at particular risk as a global rise in temperature of between 1.1 and 3.1 degrees C would increase the mean sea level by 0.36 to 0.73 meters by 2100, adversely impacting low-lying areas with submergence, flooding, erosion, and saltwater intrusion.

In a recent interview with IPS Nairobi correspondent Manipadma Jena, the director general of the International Organisation for Migration, William Lacy Swing, said that coastal migration is starting already but it is very hard to be exact as there is no good data to be able to forecast accurately.

“We do not know. But it is clearly going to figure heavily in the future. And it’s going to happen both in the low-lying islands in the Pacific and the Caribbean, and in those countries where people build houses very close to the shore and have floods every year as in Bangladesh.”

“It is quite clear that we will have more and more conflicts over shortages of food and water that are going to be exacerbated by climate change,” Lacy Swing warned.

Political crises and natural disasters are the other major drivers of migration today, he said to IPS in the interview.

Lacy Swing confirmed the fact that climate victims now add to record 60 million people who are fleeing war and persecution.

“We have never had so many complex and protracted humanitarian emergencies now happening simultaneously from West Africa all the way to Asia, with very few spots in between which do not have some issue. We have today 40 million forcibly displaced people and 20 million refugees, the greatest number of uprooted people since the Second World War.”

On 25 July, the United Nations General Assembly unanimously adopted a resolution approving an agreement to make the International Organisation for Migration part of the UN system.

Founded in the wake of the World War II to resettle refugees from Europe, OIM celebrates its 65th anniversary in December of this year. 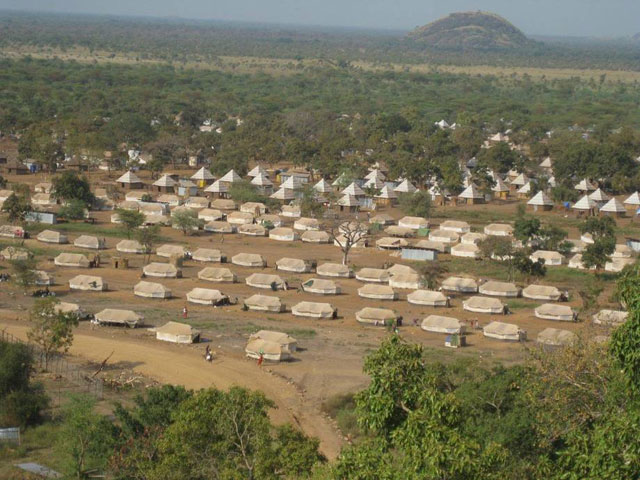 FAO and UNHCR prepared a handbook that will help mitigate the impact of displaced people on forest resources. The handbook aims to help displaced people access fuel for cooking food while reducing environmental damage and conflicts with local communities. Credit: FAO/UNHCR

“Migration is at the heart of the new global political landscape and its social and economic dynamics. At a time of growing levels of migration within and across borders, a closer legal and working relationship between the United Nations and IOM is needed more than ever,” said the United Nations Secretary-General Ban Ki-moon in a statement welcoming the Assembly’s decision.

IOM, which assisted an estimated 20 million migrants in 2015, is an intergovernmental organisation with more than 9,500 staff and 450 offices worldwide

“We are living in a time of much tragedy and uncertainty. This agreement shows Member States’ commitment to more humane and orderly migration that benefits all, where we celebrate the human beings behind the numbers,” IOM Director General William Lacy said.

Through the agreement, the UN recognises IOM as an “indispensable actor in the field of human mobility.” IOM added that this includes protection of migrants and displaced people in migration-affected communities, as well as in areas of refugee resettlement and voluntary returns, and incorporates migration in country development plans.