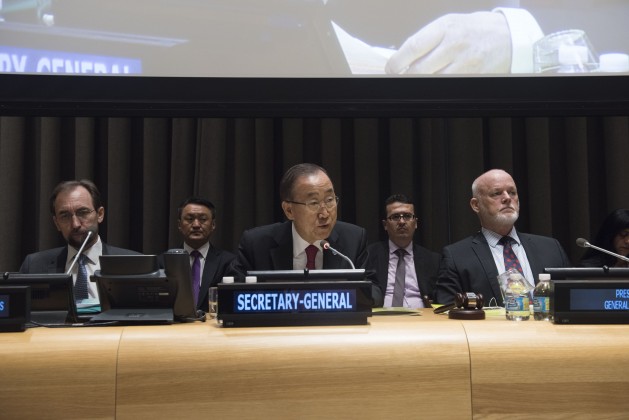 UNITED NATIONS, Sep 28 2016 (IPS) - As the United Nations commemorated the 30th anniversary of the “Right to Development”, the Group of 77 (G77) and the Non-Aligned Movement (NAM) expressed strong collective support for one of the basic human rights described as a key element in the implementation of the UN’s post-2015 development agenda.

“Development as a human right is still an unfulfilled promise for billions of people,” said a joint statement issued September 22 by two of the largest economic and political groupings at the United Nations.

The 133-member G77 (joined by China) and the 120-member NAM said 30 years ago, “we recognized the human person as the central subject of the development process and  therefore development policy should make the human being the main participant and beneficiary of development.”  And it placed people at the center of development while demanding equal opportunities and equitable distribution of economic resources.

Since then, said the joint statement, the international community has embraced the concept of “people-centred” development.

At the same time, it has recognized that, despite continuous efforts on the part of the international community, “the gap between developed and developing countries remains unacceptably wide, that most of the developing countries continue to face difficulties in participating in the globalization process and that many risk being marginalized and effectively excluded from its benefits.”

The resolution on the ‘Declaration on the Right to Development’ was adopted at the 97th plenary meeting of the General Assembly back in December 1986.

Addressing a high level meeting of the General Assembly commemorating the 30th anniversary of the Right to Development on September 22, Secretary-General Ban Ki-moon said despite great strides forward, developing countries still struggle with the diversification of their economies, international trade, macroeconomic and fiscal issues and ensuring equitable and sustainable frameworks for the use of natural resources.

There are more least developed countries (LDCs) now than in 1986. Even among middle-income countries, few are on paths that can ensure sustained, sustainable and equitable growth and poverty eradication.

Developed countries also face new challenges, such as rising inequality and financial crises, he said.  “We have new prospects for realizing the right to development, thanks to the 2030 Agenda for Sustainable Development and SDG 17 on strengthening the means of implementation and revitalizing the global partnership, together with the Addis Ababa Action Agenda.”

"it is an opportune time to demonstrate and reiterate our unequivocal commitment to the right to development, in particular the need to strive for greater acceptance, operationalization and the realization of this right at the international level.”

The 2030 Agenda explicitly recognizes the Declaration of the Right to Development and reflects its spirit. Its emphasis on equality, participation, empowerment and ensuring that no one is left behind, echoes the definition of the right to development as “an inalienable human right”.

It recognizes, like the Declaration, that each country has primary responsibility for its own economic and social development while affirming that international cooperation and partnership are essential to ensure implementation.

The 2030 Agenda has unprecedented potential to fulfil the aspirations that motivated the Declaration on the Right to Development, and that remain critical to this day.  “Let us celebrate the Declaration for its past – and more importantly for the promise it holds for the future,” Ban declared.

The President of the General Assembly Peter Thomson told the high level meeting that  many of the commitments on the UN’s post-2015 development agenda mirror duties arising from the Declaration on the Right to Development.

It includes a duty on each government to put the well-being of the entire population, and of all individuals, at the heart of their policies and strategies. This includes by ensuring their free and meaningful participation in development efforts and decision-making process, and in the distribution of the resulting benefits.

It includes the duty to remove structural obstacles and to address both historical and contemporary inequities that are holding back developing countries, he noted.

And it includes the need for international cooperation in support of those countries that remain in vulnerable situations – whether they be the least developed countries; those affected by conflict and instability; or those struggling to adapt to the impacts of climate changes, Thomson told delegates.

“As we mark this Anniversary, let us recognize that if we are to realize the Right to Development, we must do so together; working in responsible and ethical partnerships between governments, the UN system, civil society, the private sector and others.”

Addressing the high level meeting, the European Union’s (EU) Special Representative for Human Rights Stavros Lambrindis, said: “We wish to reiterate our support for the right to development, as based on the indivisibility and interdependence of all human rights as outlined in the Vienna Declaration and Programme of Action, the multidimensional nature of development strategies and the role of individuals as the central subjects of the development process.”

He pointed out that the EU is fully committed to a rights-based approach to development, encompassing all human rights, including the right to development. The right to development requires the full realisation of civil and political rights, together with economic, social and cultural rights, and a mix of policies, creating an enabling environment for individuals, involving a wide range of actors, at all levels.

But he re-stated the EU position that it is not in favour of the elaboration of an international legal standard of a binding nature “as we do not believe that this is the appropriate mechanism to realise the right to development.”

With its universal applicability and its importance in shaping development priorities, the 2030 Agenda for Sustainable Development will open up new avenues to integrate human rights into global and national policies in both developed and developing countries over the next 15 years, he added.

Meanwhile, in its joint statement, the G77 and NAM said the Right to Development is crucial to the three agreements reached last year: the 2030 Agenda for Sustainable Development, the Addis Ababa Action Agenda on Financing for Development (FfD) and the Paris Climate Agreement under the United Nations Framework Convention on Climate Change which have vowed to “leave no one behind.”

“There is no doubt that in order for us to reach that goal, the right to development must be central to the implementation of the 2030 Agenda for Sustainable Development taking into account countries and peoples who face specific challenges, in particular, African countries, least developed countries, landlocked developing countries and small island developing States as well as specific challenges that many middle-income countries face, as well as countries facing conflict and post-conflict situations, humanitarian emergencies, the effects of climate change and global pandemics.”

The statement also said “We must take resolute steps to eliminate the massive and flagrant violations of human rights of peoples and human beings affected by situations such as those resulting from apartheid, all forms of racism and racial discrimination, colonialism, foreign domination and occupation, aggression, foreign interference and threats against national sovereignty, national unity and territorial integrity, threats of war and refusal to recognize the fundamental right of peoples to self-determination.”

According to the statement, the 30th Anniversary coincided with the first year of implementation of the 2030 Agenda for Sustainable Development.  “So it is an opportune time to demonstrate and reiterate our unequivocal commitment to the right to development, in particular the need to strive for greater acceptance, operationalization and the realization of this right at the international level.”

“We must continue our efforts also, to mainstream this right in our work at the national and regional level and in the United Nations, particularly in the Human Rights mechanisms, as well as international financial and multilateral trading systems in the context of the elaboration of their policies in line with the 2030 Agenda.”

One of the recurring themes in recent conversations and panel discussions was the understanding that the realization of the right to development is a necessity now, more than ever.  “The ambitious goals we have committed ourselves to, the massive challenges and violations of human rights caused by situations resulting from, among others, unilateral coercive measures and unfair sanctions, can only be reached and overcome if we embrace the tenets of the Declaration.”

In this regard, the statement said: “We urge all States to expand and deepen mutually benefiting cooperation with each other in promotingdevelopment and eliminating obstacles to it, in the context of promoting an effective international co-operation for the realization of the right to development, bearing in mind that lasting progress towards the implementation of the right to development requires effective development policies at the national level as well as equitable economic relations and a favorable economic environment at the international level; and to work together towards the elaboration and adoption of a Convention on the Right to Development.”

The G77 and NAM pointed out there are different approaches, visions, models and tools available to each country to achieve sustainable development, in accordance with its national circumstances and priorities as well as its own development context.

“It is our collective hope that on this auspicious 30th Anniversary of this landmark Declaration, we are rightly reminded of the work that still needs to be done to realize this fundamental right.”

The G77 Newswire is published with the support of the G77 Perez-Guerrero Trust Fund for South-South Cooperation (PGTF) in partnership with Inter Press Service (IPS).