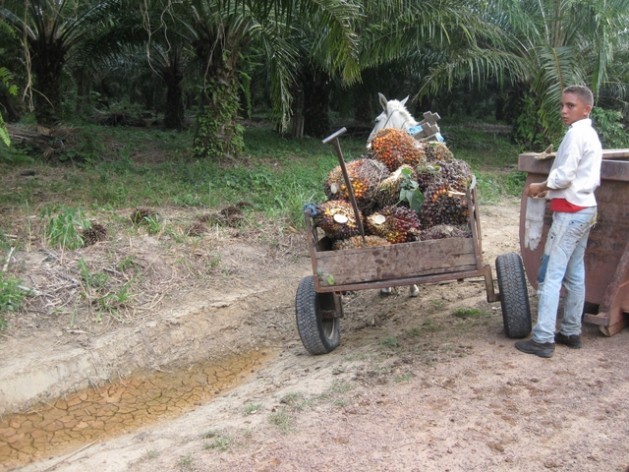 HONOLULU, Hawaii, USA , Sep 12 2016 (IPS) - “In San Lorenzo they cut down the jungle to plant African oil palms. The only reason they didn’t expand more was that indigenous people managed to curb the spread,” Ecuadorean activist Santiago Levy said during the World Conservation Congress.

Levy, the head of the non-governmental Foundation for the Development of Community-based Development Alternatives in the Tropics (ALTROPICO) in the northern Ecuadorean province of Carchi, cited the impacts of the crop in that region near the border with Colombia, since the start of the last decade.

“Infrastructure is needed, as well as a great deal of water for processing, and wastewater that is generated leaks into the soil. I don’t see sustainable oil palm production as possible; it necessarily implies cutting down jungle to plant a monoculture crop,” he told IPS during the congress, which was held in Honolulu, the capital of the U.S. state of Hawaii, in the first 10 days of September.

“There is a need to mobilise efforts in order to respond to all problems stemming from oil palm. We should go step by step. First, we have to stop deforestation and then address the intensification of seeding that takes place on degraded land.” – Arnold Sitompul

The expansion of the African oil palm (Elaeis guineensis) in that Latin American nation in recent years is similar to what has happened in Brazil, Colombia, Guatemala, Honduras and Indonesia, the world’s biggest producer.

The cooking oil extracted after the fruit of the oil palm is crushed is used in the food, cosmetics and agrofuel industries, and oil palm fever has infected several countries, leading to clashes over land, deforestation, labour disputes, water pollution, and even murders of local activists.

This legacy casts doubt on the mechanisms fomented by producer nations, the industry, environmental organisations and academics, aimed at achieving sustainable production of palm oil.

A new attempt was promoted by participants in the congress organised by the International Union for Conservation of Nature (IUCN) in Hawaii.

One of the resolutions debated in-depth at the gathering involved the mitigation of the impacts on biodiversity of the expansion of oil palm plantations, and efforts to keep from encroaching on ecosystems as-yet untouched by the industry.

The motion urged the Switzerland-based IUCN, which has 1,200 governmental and non-governmental members, to assess the repercussions of the expansion of African palm plantations with regard to conservation of biodiversity, and to study and define best practices for the sector.

It also called for the creation of a working group to support governments and other actors in setting limits on which ecosystems can be used for the production of palm oil, and urged the members to adopt effective safeguards to protect indigenous peoples who have been victims of the expansion of the crop.

The Hawaii Commitments, the document containing 99 resolutions adopted by the congress, says “The need to provide food for people has resulted in the intensification and industrialisation of agriculture, including aquaculture, while traditionally farmed areas, biodiversity and natural ecosystems have been lost”.

This edition of the congress, which is held every four years by the IUCN and whose theme this year was “Planet at the Crossroads”, drew 9,500 participants from 192 countries, including delegates from governments, NGOs, and the scientific and business communities. 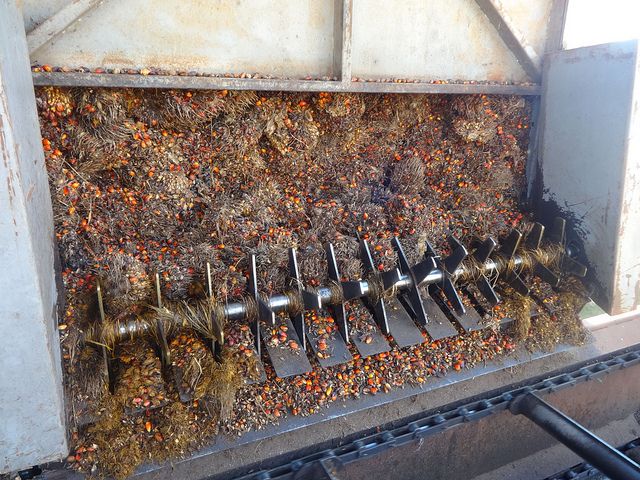 The first step in the processing of the oil palm fruit, whose oil is in growing demand around the world, with an increasing impact on biodiversity. Credit: Fabiana Frayssinet/IPS

Arnold Sitompul, WWF Indonesia conservation director, said the current model to certify sustainable production of palm oil has not worked, because deforestation and the loss of biological diversity persist.

“There is a need to mobilise efforts in order to respond to all problems stemming from oil palm,” he told IPS. “We should go step by step. First, we have to stop deforestation and then address the intensification of seeding that takes place on degraded land.”

The area planted in oil palm has grown eight-fold in his country since 1985. Since 2011, the Indonesian government has declared moratoriums on the issuance of permits for new plantations, although the activist said they have not been effective in curbing expansion of the crop.

There are some 200,000 sq km of African oil palm worldwide, and palm oil accounts for 23 percent of global demand for oils and fats.

“Certification cannot be a pretext for companies to hurt the environment. It can’t be used as greenwashing,” an environmentalist told IPS during the congress, on condition of anonymity.

The Roundtable on Sustainable Palm Oil (RSPO), which has brought together the different stakeholders since 2004, created a certification system.

A review of the complaints filed with the RSPO grievances mechanism would appear to confirm these conclusions about the production of Certified Sustainable Palm Oil (CSPO), a complaints have increased since 2014.

Of the total 64 complaints, 40 percent refer to prior informed consent from indigenous people for growing the crop on their territories, 23 percent to conservation problems and 16 percent to pollution and burning of forest and jungle.

Indonesia heads the list, with 35 complaints, followed by Malaysia (13) and Colombia (two). The rest are grievances brought in Brazil, Cameroon, Costa Rica, France, Liberia and Peru.

When the RSPO complaints panel – made up of representatives of companies, banks and environmental organisations – met Jun. 30 in Malaysia it received complaints about violations of labour rights, freedom of movement of indigenous people, failed payments, and impacts on biodiversity.

The RSPO, which groups some 3,000 members from the seven sectors of the palm oil industry, has so far certified 11 million tons of palm oil produced on 22,100 sq km.

The organisation drafted a set of social and environmental criteria which companies must comply with in order to produce CSPO.

These principles include full traceability, compliance with local and international labour rights standards, respect for indigenous rights, preventing clearance of primary forests and other high conservation areas, and the use of clean agricultural practices.

Up to now, CSPO has come from Indonesia, Malaysia, Papua New Guinea, Brazil and Colombia and only represents 17 percent of global production.

“It makes no sense to produce biofuels using food. Alternatives to oil crops must be found, with the aim of not hurting the environment,” said Levy.

Sitompul is optimistic. “It’s a good moment to improve the situation. Best practices can be fostered. Indonesia should address value added creation instead of only providing raw materials.