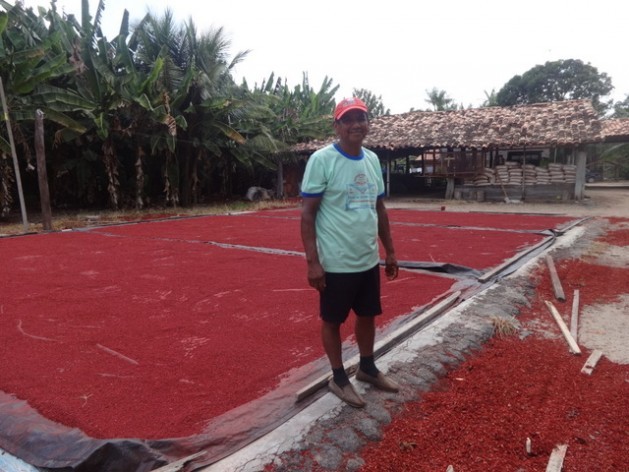 Antônio de Oliveira on the patio at his farm where he dries achiote, one of the traditional Amazonian crops that now grow side by side with oil palm. Credit: Fabiana Frayssinet /IPS

CONCORDIA DE PARÁ/MOJÚ/ACARÁ, Brazil , Nov 20 2013 (IPS) - Thousands of small farming families in Pará, in the Amazon jungle in northeast Brazil, have turned to the African oil palm as a new source of income, through contracts with biofuel companies. Strange bedfellows, which poses cultural and economic challenges.

The small farm of Antônio de Oliveira smells like a mixture of oranges, black pepper and achiote or annatto (Bixa orellana), a shrub whose fruit is harvested for its seeds, which contain a natural dye that has coloured his farm red.

“I didn’t know anything about oil palm…it’s really different to work with, it’s a queer bird, and complicated,” said Oliveira, who signed a contract with the biofuel company Biopalma three years ago to plant African oil palm (Elaeis guineensis), known as “dendê” in Brazil.

Biopalma belongs to the Vale mining company, and has 60,000 hectares of oil palm of its own. In addition, it buys the output of small farmers through its Family Agriculture programme.

The company plans to use palm oil to produce biodiesel to run the machinery and vehicles at its mines.

“I wasn’t prepared for dendê. I don’t like to have to count how many plants I have or to make a square neat plot to plant them. I planted them here and there,” the 65-year-old farmer tells IPS, explaining that he used to make a living selling black pepper, oranges and achiote.

Oliveira began to work at the age of 10 “from sunup to sundown” as a day labourer, and says he regrets that he received so little education. “When I write something, my wife tells me a lot of letters are missing,” he says, laughing.

He learned math out of necessity, and uses it to calculate his yield of fruit from the oil palm, for example, which takes five years to begin to fully produce.

Currently, he harvests some 8,000 kilos every two weeks, earning around 120 dollars a ton. But he says that barely covers expenses, because he has to pay four assistants.

But unlike black pepper, which produces one harvest a year, oil palm fruit is harvested every 15 days. So he hopes to soon buy a “really nice” pickup truck, to transport his produce and take his family on trips.

“My dream is to see [the southern city of] Rio Grande do Sul. When it’s warm; I won’t go when it’s cold,” he says with a smile, explaining that he is used to the warm climate of the rainforest.

“Some of the farmers who are associates of the company have problems managing their businesses,” Biopalma technician Charles Vilarino tells IPS. “But Oliveira already works with several products, and in practice he is a small businessman. He has to keep track of how much money is coming in and going out, how much he spends on each harvest.”

When they join the oil palm programmes and agree to dedicate up to 10 hectares of land to cultivating the palm fruit, farmers receive credit from the federal government as well as technical assistance and a guarantee that their output will be purchased for 30 years.

But difficulties abound. In the north of the state of Pará many farmers have no means of transport to carry their products to market, and there is no strong tradition of setting up cooperatives to come up with collective solutions to their problems.

“They told me that soon we’ll have to carry the fruit to the [Biopalma] plant [in the municipality of Mojú], and I don’t have a truck yet. What’ll I do?” says a worried Oliveira.

Biopalma acts as an intermediary for institutions like the Brazilian Support Service for Micro and Small Enterprises (SEBRAE) to offer farmers courses in management and cooperatives.

“We can’t force them to organise in cooperatives,” Biopalma’s analyst of communications and social projects Sauer Teles tells IPS. “That has to come from them, our associates. But we brought in SEBRAE because they were interested.”

The Biofuel Watch Centre, created by Repórter Brasil, an investigative reporting NGO that provides journalists with news on environmental and social justice issues, produced a report in June on the incompatibility of the dendê culture with family farming in Pará.

The study says Eco Dendê, a government programme that offers credit to farmers to get involved in palm oil cultivation, “holds out a promising future that the family farmers are dreaming of, but its promises of profits could end up being false.”

“So much has been promised, and so little has been discussed about its impact on the traditional way of life of these rural communities,” says Judge Marcus Barberino, who specialises in labour relations in the countryside, and was quoted by the report.

Belém Bionergia, a joint venture between Brazil’s state-run oil company Petrobras and Portugal’s Galp Energia, will also promote the planting of dendê for the production of biodiesel.

The company has contracts with 280 families, and plans to expand that number to a total of 600 families.

On the way to an interview with one of the families, IPS came across the farm of a family that is not involved in the new dendê boom.

Of the eight members of the family, only the one-year-old baby was not working when IPS stopped in. The father, Reginaldo Dias, was toasting cassava flour in a wood-fired oven, the grandparents and children were peeling cassava roots, and Dias’s wife was grating cassava.

It is a form of survival, but a cultural ritual as well. The surplus cassava flour that the family won’t consume is sold at the market to buy “other things we need: sugar, beans and rice,” Dias tells IPS.

A year and a half ago he planted dendê on 10 hectares of his farm. On the remaining 15 he continues to produce pineapple, black pepper, cassava and beans, along with achiote and other native Amazonian crops.

“There was a time when black pepper brought in a good profit, but not anymore – it’s too much work for too little money, so when the dendê arrived, I decided to join in,” Silva tells IPS.

He says he hopes the oil palm will make it possible for his kids to stay in school, adding that “their future is the most important thing for me.”

“You can’t jump into a ‘green’ model without addressing social questions,” says João Meirelles, director of the Peabirú Institute, which provides advice on social and environmental issues to companies involved in the oil palm sector.

When the big companies come in with their requirements, regulations and contracts with legal jargon, “it can produce a shock in a region with a different social and land tenure context, where there are basic unresolved problems,” he tells IPS.

In Pará, average monthly income is less than 50 dollars per person. Only four percent of small farmers have legal title to their land, and 40 to 50 percent of the local population is illiterate. Farmers continue to use the slash and burn technique to clear the rainforest and prepare the land for planting.

Agricultural techniques “do not change overnight,” Meirelles says. In his view, the expansion of oil palm in the Amazon rainforest, “based on mega-companies with a tradition of excellence, is incompatible to some extent with traditional family farming.”

But these companies, he says, can play “a transformative role,” strengthening the local communities’ connection to society and improving conditions among rural families in Pará.