Birgit Schwarz is a Senior Press Officer for Human Rights Watch based in Johannesburg. 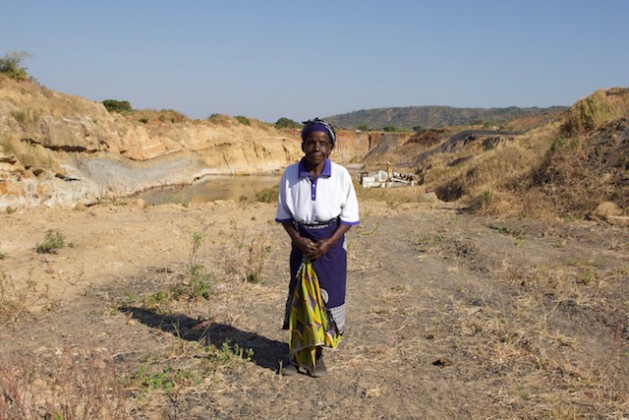 Nagomba E., 75, standing where her house used to be in Mwabulambo, Karonga district. She and her family were told to relocate in 2008 because the land was needed for coal mining. Credit: Lauren Clifford-Holmes for Human Rights Watch

LILONGWE, Sep 27 2016 (IPS) - Nagomba E. is no longer young; her hip is giving her trouble and her back is stooped from years of bending over her corn and rice fields. Yet every morning, at the crack of dawn, the wiry 74-year-old sets out on a strenuous half-hour walk to fetch water from a nearby river so that her ailing husband can take a bath. Despite her limp, Nagomba moves fast and with the sure-footedness of a mountain goat.

It would be easier for her to fetch her water from a borehole that is closer to her house. But the water is often “bad” she says, “you cannot even use it for bathing.” Besides, she adds, “if you oversleep, you are there till noon,” waiting for a turn at the pump.

Before coal was discovered in Mwabulambo, a remote rural community of Karonga District in northern Malawi, water was never something Nagomba and her neighbours would have to worry about or even line up for.

“I used to have two taps right at my house,” Nagomba says, “with running water in the kitchen and bathroom.” But then heavy trucks moved in — which turned out to belong to a mining company. The company, with government’s approval, claimed her land, forced her to relocate to the edge of the coal field further south, and tore down her house. With it went the taps and water pipes.

That was almost nine years ago. Since then, the coal mine, which Nagomba and her neighbours hoped would bring progress and development, has mainly caused regression, hazards, and hardship.

Over the past decade, Malawi, one of the world’s poorest countries, has promoted private investment in mining and resource extraction as a way to grow and diversify its largely agriculture-based economy. Karonga, where Nagomba lives, is the country’s test case for industrial mining.

Malawi’s first uranium mine and two of the country’s biggest coal mines are located here, on the western shores of Lake Malawi. The government said the mines would provide jobs and improve people’s livelihoods. Schools were promised, and clinics as well as boreholes to restore access to drinking water. Hardly any of these promises ever materialized.

Weak enforcement of existing laws and policies combined with lack of transparency and community involvement in decision making have left local communities unprotected and in the dark about their rights and about the risks mining activities might pose to their daily lives, Human Rights Watch says in a new report, “They Destroyed Everything.” Mining companies meanwhile are allowed to monitor themselves and are almost never held to account if they cause devastation.

When strangers knocked on her door during the 2008 rainy season and told her that she would have to move to make room for a coal mine, Nagomba was taken by surprise.

Nagomba, who supported three grandchildren and her sick husband with the income from farming a small but fertile plot of land, eventually accepted the inevitable, thinking that she would get “a lot of money.” She never asked how much, however. As it turned out, the compensation was not even enough to rebuild her house. The family had to sell two cows to put a roof over their heads again. She received no money for the land itself. It was “customary land” that her family had farmed for generations, but for which they held no individual title. Mining machinery left behind at Eland coal mine at Mwabulambo after closure in 2015. Locals said that before the mine was closed, they were not informed about the closure or how the company intended to mitigate risks stemming from the abandoned mining site. Credit: Lauren Clifford-Holmes for Human Rights Watch

Over the years, Nagomba’s story repeated itself again and again in the mining areas of Karonga. In Mwabulambo alone, more than 30 households were relocated from their customary land between 2008 and 2015, when the mining company suspended operations. At times, the bulldozers moved in so fast that people had neither time to rebury their loved ones interred on the community’s land, nor to finish reconstructing their homes. One family spent weeks sleeping under a tree before they could move into their rebuilt house.

The mine is owned and operated by Eland Coal Mining Company, a subsidiary of the Isle of Man-based Heavy Mineral Limited, which in turn is owned by Independent Oil & Resources PLC – a company based in Cyprus. Although it has not been operational for more than a year, it continues to affect the area, its water resources, and Nagomba’s source of income, her crops.

“We used to grow corn, cassava and rice,” she recalls. “Now we are complaining of hunger.” The fields she was given lie on the edge of the mine. Every time it rains, blackish, potentially acidic, mine water runs into her fields, withering her crop and diminishing her yield. “We cannot afford to buy food. We need to farm,” she says. “But they have destroyed the land where we were producing fruit, and left us behind with nothing.”

Since the mine’s closure, the community has tried to get the company to clean up, restore their broken pipes, ensure that mine water no longer seeps into their borehole and onto their fields, and close the deep pits that were left behind. In 2015, the villagers went to the District Commissioner’s Office to air their grievances. Getting no help there, they marched to the gates of the company. “We told them ‘you are really wronging us,’” Nagomba recalls. “We don’t have water. We don’t have food. But we are still waiting for an answer.”

To this day, residents fear that the borehole and river water is putting their health at risk. Cows and even children have fallen into ill-secured, water-filled pits the company left behind. And villagers say the pits themselves have become breeding grounds for malaria-carrying mosquitos.

“If they had built a health center, they could at least have saved some lives from malaria,” says Rojaina, another community member who was forced to relocate. As the promised clinic was never built and the nearest hospital is miles away in town, “people die on the way,” she says.

Few are aware of the dangers the water in the pits itself poses. The government had the water tested last year. These tests confirmed that the water is acidic, the deputy director for water quality at the Ministry of Agriculture, Irrigation and Water told Human Rights Watch, which means that it is neither safe for consumption nor bathing. But the results have never been made public. Children regularly swim in the pits behind Nagomba’s house. And no signs warn of the dangers these pools pose to human health.

Now that Nagomba no longer has piped water, she depends on the river a lot, particularly during dry season, when borehole and well run dry, walking there up to four times a day to fetch water for bathing, drinking and cooking. She worries about the safety of the river water, too, but at least she can treat it with chemicals the government provided after a cholera outbreak at the beginning of the year.

The river Nagomba depends on flows into Lake Malawi, a fragile ecosystem and a key source of livelihood for over 1.5 million people. More than 10 extraction projects are located on the lake’s shores and tributaries, which are protected UNESCO World Heritage sites. Not all are active yet. But the risks these mining activities pose to the lake’s ecosystem and to the bordering communities’ health and livelihoods are enormous without proper government oversight.

So far, Malawi’s law has failed to protect the needs and rights of mining communities like Nagomba’s and her neighbours’ from the adverse effect mining has had on their lives. It has also failed to protect their environment and water resources. A new mining bill being drafted could help change this, strengthening governmental control over mining projects and the communities’ right to know.

Malawi’s government has taken some steps in the right direction, and acknowledged the need to enforce a rehabilitation plan the owners of the defunct Mwabulambo mine had promised to carry out. So far the company has done nothing.

“I never had problems,” says Nagomba, recalling a time where there was enough to eat and safe water to drink. “The mining company brought me problems.” After nine years of suffering and hunger without protection from the government or the mining company, she has little hope that things will change for the better in her lifetime. “Time is already up,” she says in a voice that sounds as if she is reciting poetry. “We are just waiting to go to our graves now.”