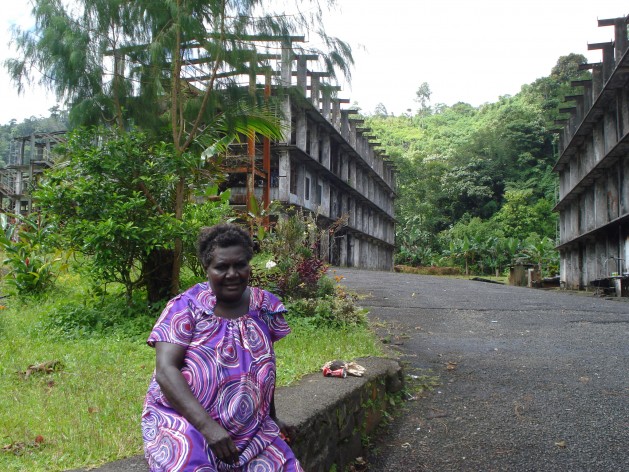 Landowner Lynette Ona, along with local leaders and villagers in the Panguna mine area, look to tourism as a sustainable economic alternative to large-scale mining in post-conflict Bougainville, Papua New Guinea. Credit: Catherine Wilson/IPS

PANGUNA, Autonomous Region of Bougainville, Papua New Guinea, Sep 7 2016 (IPS) - The Panguna copper mine, located in the mountains of Central Bougainville, an autonomous region in the southwest Pacific Island state of Papua New Guinea, has been derelict for 27 years since an armed campaign by local landowners forced its shutdown and triggered a decade-long civil war in the late 1980s.

The former Rio Tinto majority-owned extractive venture hit world headlines when the Nasioi became the world’s first indigenous people to compel a major multinational to abandon one of its most valuable investments during a bid to defend their land against environmental destruction.

"That is what we were fighting for: environment, land and culture." -- Lynette Ona

Today, local leaders and entrepreneurs, including former combatants, see the site playing a key role in sustainable development, but not as a functioning mine.

“Our future is very, very dangerous if we reopen the Panguna mine. Because thousands of people died, we are not going to reopen the mine. We must find a new way to build the economy,” Philip Takaung, vice president of the Panguna-based Mekamui Tribal Government, told IPS.

He and many local villagers envisage tourists visiting the enigmatic valley in the heart of the Crown Prince Ranges to stay in eco-lodges and learn of its extraordinary history.

“It is not just the mine site; families could build places to serve traditional local food for visitors. We have to build a special place where visitors can experience our local food and culture,” villager Christine Nobako added. Others spoke of the appeal of the surrounding rainforest-covered peaks to trekkers and bird watchers.

An estimated 20,000 people in Bougainville, or 10 percent of the population, lost their lives during the conflict, known as the ‘Crisis.’ Opposition by local communities to the mine, apparent from the exploration phase in the 1960s, intensified after operations began in 1972 by Australian subsidiary, Bougainville Copper Ltd, when they claimed mine tailings were destroying agricultural land and polluting nearby rivers used as sources of freshwater and fish. Hostilities quickly spread in 1989 after the company refused to meet landowners’ demands for compensation and a civil war raged until a ceasefire in 1998.

In the shell of a former mine building, IPS spoke with Takaung and Lynette Ona, local landowner and niece of Francis Ona, the late Bougainville Revolutionary Army leader. A short distance away, the vast six-kilometre-long mine pit is a silent reminder of state-corporate ambition gone wrong.

According to Ona, the remarkable story of how a group of villagers thwarted the power and zeal of a global mining company is a significant chapter in the history of the environmental movement “because that is what we were fighting for; environment, land and culture.” And, as such, she says, makes Panguna a place of considerable world interest.

Zhon Bosco Miriona, managing director of Bougainville Experience Tours, a local tourism company based in the nearby town of Arawa, which caters to about 50-100 international tourists per year, agrees.

“Panguna is one of the historical sites in Bougainville. People go up to Panguna to see for themselves the damage done and want to know more about why the Bougainville Crisis erupted,” he said.

In a recent survey of Panguna communities by Australian non-government organisation, Jubilee Australia, tourism was identified as the second most popular economic alternative to mining after horticulture and animal farming. Although realising the industry’s full potential requires challenges for local entrepreneurs, such as access to finance and skills development, being addressed.

Objection here to the return of mining is related not only to the deep scars of the violent conflict, but also the role it is believed to have had in increasing inequality. For example, of a population of about 150,000 in the 1980s, only 1,300 were employed in the mine’s workforce, while the vast majority of its profits, which peaked at 1.7 billion kina (US$527 million), were claimed by Rio Tinto and the Papua New Guinea government.

Today, post-war reconstruction and human development progress in Bougainville is very slow, while the population has doubled to around 300,000. One third of children are not in school, less than 1 percent of the population have access to electricity and the maternal mortality rate could be as high as 690 per 100,000 live births, estimates the United Nations Development Program.

“In terms of doing eco-tourism, Bougainville has the rawness. There are the forests, the lakes, the sea, the rivers and wetlands,” Lawrence Belleh, Director of Bougainville’s Tourism Office in the capital, Buka, told IPS.

Bougainville was also the site of battles during World War II and many relics from the presence of Australian, New Zealand, American and Japanese forces can be seen along the Numa Numa Trail, a challenging 60-kilometre trek from Bougainville Island’s east to west coasts.

“There are a lot of things that are not told about Bougainville, the historical events which happened during World War II and also the stories which the ex-combatants [during the Crisis] have, which they can tell…..we have a story to tell, we can share with you if you are coming over,” Belleh enthused.

Improving local infrastructure, such as transport and accommodation, and dispelling misperceptions of post-conflict Bougainville are priorities for the tourism office in a bid to increase visitor confidence.

“Many people would perceive Bougainville as an unsafe place to come and visit, but that was some years back. In fact, Bougainville is one of the safest places [for tourists] in Papua New Guinea. The people are very friendly, they will greet you, take you to their homes and show you around,” Belleh said.