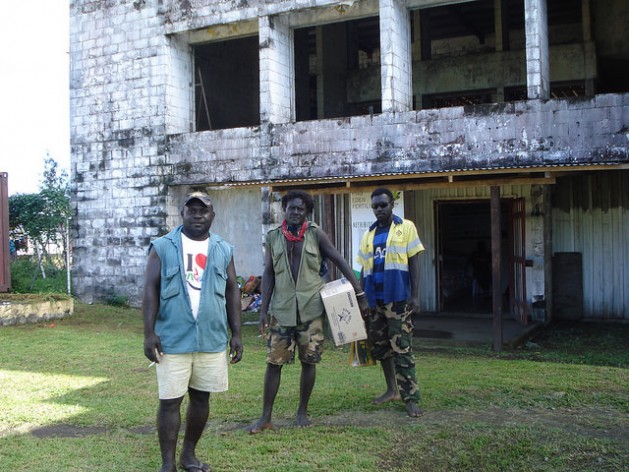 Buildings gutted and scarred by the Bougainville civil war are still visible in the main central town of Arawa. Credit: Catherine Wilson/IPS

Yet fifteen years after the 2001 peace agreement, there is no accurate information about the scale of atrocities which occurred to inform ongoing peace and reconciliation efforts being supported by the government and international donors. Now members of civil society and grassroots communities are concerned that lack of truth telling and transitional justice is hindering durable reconciliation.

“I believe there should be a truth telling program here and I think the timing is right,” Helen Hakena, Director of the Leitana Nehan Women’s Development Agency, a local non-government organisation, told IPS.

“It is nearly twenty years [since the conflict] and some people have moved on with their lives, while there are others who have just cut off all sense of belonging because they are still hurting.”

“People have been accused of killing others during the Crisis and that has carried on in the form of recent killings." -- Rosemary Dekaung

In these tropical rainforest covered islands it is estimated that around 20,000 people, or 10 percent of the population at the time, lost their lives and 60,000 were displaced as the Papua New Guinean military and armed revolutionary groups fought for territorial control. The conflict erupted in 1989 after indigenous landowners, outraged at loss of customary land, environmental devastation and socioeconomic inequality associated with the Rio Tinto majority-owned Panguna copper mine in Central Bougainville, launched a successful campaign to shut it down.

“There is a lot to be done on truth telling. When we talk about the Crisis-related problems our ideas are all mangled together and we are just talking on the surface, not really uprooting what is beneath, what really happened,” said Barbara Tanne, Executive Officer of the Bougainville Women’s Federation in the capital, Buka.

Judicial and non-judicial forms of truth and justice are widely perceived by experts as essential for post-war reconciliation. The wisdom is that if a violent past is left unaddressed, trauma, social divisions and mistrust will remain and fester into further forms of conflict.

Failure to address wartime abuses in Bougainville is considered a factor in resurgent payback and sorcery-related violence, the Office of the United Nations High Commissioner for Human Rights reports. A study of 1,743 people in Bougainville published last year by the UNDP revealed that one in five men had engaged in sorcery-related violence, while one in two men and one in four women had been witnesses.

Rosemary Dekaung believes that recent witchcraft killings in her rural community of Domakungwida, Central Bougainville, have their origins in the Crisis.

“People have been accused of killing others during the Crisis and that has carried on in the form of recent killings,” she said.

Stephanie Elizah, the Bougainville Government’s Acting Director of Peace, said that transitional justice is a sensitive topic with the ex-combatants due to the partial amnesty period which was agreed to apply only to the period of 1988 to 1995. However, she admits that many reconciliations taking place are not addressing the extent of grievances.

“From feedback from communities that have gone through reconciliation we know that it has not truly addressed a lot of the issues that individuals have….the victims, the perpetrators, those who have been involved in some form of injustice to the next human being; some of them have been allowed to just go and be forgotten,” Elizah said.

International law endorses the rights of any person who has suffered atrocities to know the truth of events, to know the fate and whereabouts of disappeared relatives and see justice done.

In 2014 the Bougainville Government introduced a new missing persons policy, which aims to assist families locate and retrieve the remains of loved ones who disappeared during the Crisis, but excludes compensation or bringing perpetrators to justice.

It is yet to be implemented with three years to go before Bougainville plans a referendum on Independence in 2019.

“A truth commission must be established so people can tell the truth before they make their choice for the political future of Bougainville. Because when we decide our choice, problems associated with the conflict must be addressed,” Alex Amon Jr, President of the Suir Youth Federation, North Bougainville, declared.

Hakena believes there are repercussions if transitional justice doesn’t occur.

“It is happening now. Elderly people are passing on their negative experiences to their sons, who have not experienced that, and who will continue to hate the perpetrator’s family. Years later some of these kids will not know why they hate those people and there will be repercussions,” she elaborated.

The government is planning a review of its peace and security framework this year during which there will be an opportunity to explore people’s views on transitional justice, Elizah said.

The benefits of establishing a truth commission include a state-endorsed public platform for everyone to have their stories heard, give testimony of human rights abuses for possible further investigation and for recommendations to be made on legal and institutional reforms.

At the grassroots, people also point to the immense potential of implementing more widely customary processes of truth telling that have been used for generations.

“We do have traditional ceremonies where everybody comes together, the perpetrators and the victims and all others who are affected and they will thrash and throw out everything. That is very much like a truth commission, where, in the end, they say this is what we did,” Rosemary Moses at the Bougainville Women’s Federation in Arawa said.

Unabali agreed that durable peace should be built first on traditional truth telling mechanisms, which had widespread legitimacy in the minds of individuals and communities, even if a truth commission was also considered.