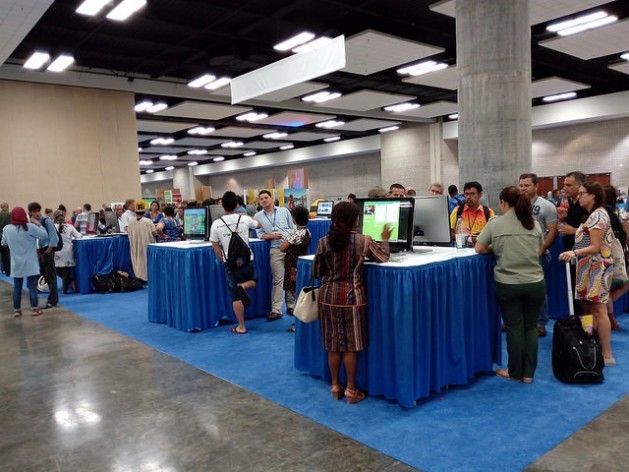 A hall for the sharing of experiences and research among the 9,500 participants in the World Conservation Congress, which among other issues has discussed the benefits and challenges of small-scale conservation, during the sessions held the first 10 days in September in Honolulu, Hawaii. Credit: Emilio Godoy/IPS

HONOLULU, Hawaii, USA, Sep 7 2016 (IPS) - When the communities living in the Tatamá y Serranía de los Paraguas Natural National Park in the west of Colombia organised in 1996 to defend their land and preserve the ecosystem, they were fighting deforestation, soil degradation and poaching.

Twenty years later, local residents, farmers and community organisations have created four reserves, a brand of coffee and a community radio station, while making progress in conservation of this part of the Chocó-Darién conservation corridor along the border with Panama, although threats persist.

“One of the factors is sustaining the reserves in the long-term and generating benefits for local communities,” said César Franco, founder and director of the community environmental organisation Corporación Serraniagua.

“One of the best solutions for conserving protected areas is working with the people on a small-scale. We have a strengthened, organised community that is economically sustainable. That shows it is better to invest in communities rather than just barging in with major infrastructure projects.” -- Grethel Aguilar

The ecologist told IPS that “everything is under threat,” especially from megaprojects, like gold mining and oil prospecting, the loss of secure tenure on community-owned land, and the encroachment of agribusiness plantations, “which destroy family systems.”

Serraniagua is a collective of owners of nature reserves, associations of agrecological farmers, rural women’s networks, and local environmental groups in an area of 2,500 sq km inhabited by some 40,000 people, including indigenous and black communities.

The work of Franco and his fellow activists earned them one of the 15 prizes awarded to “Hotspot Heroes” for their outstanding conservation efforts, by the U.S. Critical Ecosystem Partnership Fund (CEPF) during the 2016 World Conservation Congress (WCC) held in Honolulu, Hawaii in the first 10 days of September.

The case of the Tatamá y Serranía de los Paraguas Natural National Park shows the importance of small-scale protection efforts that benefit the environment and local residents, in comparison to large-scale infrastructure works and their enormous impact on ecosystems.

Local action is one of the main themes at this year’s edition of the congress, which is held every four years, organised by the International Union for Conservation of Nature (IUCN). On this occasion it is hosted by the U.S. state of Hawaii, and has drawn 9,500 participants from 192 countries, including delegates from governments, NGOs, and the scientific and business communities.

The congress, whose theme this year is “Planet at the Crossroads”, will produce the Hawaii Commitments, 85 of which were approved by the Switzerland-based IUCN Members’ Assembly, which groups 1,200 governmental and non-governmental members, prior to the Honolulu gathering.

The debate in Honolulu is focused on 14 motions on controversial issues, like compensation for destruction of biodiversity, closing domestic markets for ivory trade, and improved standards for ecotourism.

Three of the resolutions address conservation and the impact of major infrastructure projects like highways, hydroelectric dams, ports, mines and oil drilling. 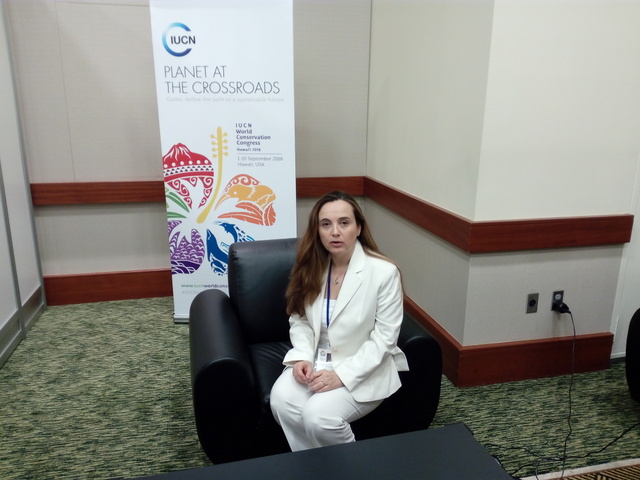 Grethel Aguilar, IUCN regional director for Mexico, Central America and the Caribbean, stresses the advantages of small-scale conservation efforts as an alternative to megaprojects, during the World Conservation Congress in Honolulu, Hawaii. Credit: Courtesy of Emilio Godoy/IPS

In the northwest Mexican state of Nayarit, Heidy Orozco, executive director of the non-governmental Nuiwari Centre for Social Development and Sustainability, emphasises the advantages of allowing the San Pedro River, the last free-flowing river in Mexico’s western Sierra Madre mountains, to remain dam-free.

“The area contains sacred places, mangroves and a biosphere reserve,” the activist, who lives near the river, told IPS in Honolulu. “It is still considered an area of biological and cultural wealth.”

Small farmers produce crops along the middle stretch of the river, while fishing communities make a living on the lower parts.

But the local ecosystem and agriculture, livestock and fisheries are under threat by the government CFE power utility’s plans to build the Las Cruces hydropower dam 65 km north of the city of Tepic, the capital of Nayarit.

The plant is to have an installed capacity of 240 MW and a 188-metre-high dam with a reservoir covering 5,349 hectares.

The Náyeri Indigenous Council and the Intercommunity Council of the San Pedro River, which emerged to fight construction of the dam, complain that it would hurt the Marismas Nacionales Biosphere Reserve, the most extensive mangrove forest system along Mexico’s Pacific coast.

They also complain that it would destroy 14 sacred sites and ceremonial centres of the Náyeri or Cora indigenous people, the Huichol or Wixáritari people, and the Tepehuán people.

In addition, it would flood the town of San Blasito.

The dam’s environmental impact study acknowledges that subsistence farming and small-scale livestock-raising would be lost in the area, but says it would be replaced by new opportunities for fishing in the reservoir.

In Bolivia, small-scale community conservation initiatives coexist dangerously with the construction of megaprojects.

For example, in a mine in the Natural Integrated Management Area of San Matías, in Bolivia’s Pantanal region in the department of Santa Cruz along the border with Brazil, only one hectare has been used over the last 10 years to mine ametrine, also known as bolivianite, a kind of quartz that is a mixture of amethyst and citrine.

This small-scale mine contrasts with the large-scale gold mining in the north of the country.

“Small-scale development is a solution. A number of lessons have been learned, such as the need for benefit-sharing, the creation of effective conservation mechanisms, and respect for laws and agreements that have been reached,” Carmen Miranda, Amazon region coordinator with the Indigenous Peoples’ and Local Community Conserved Areas and Territories (ICCA), told IPS.

In Guatemala, Q’eqchí communities near the Lachuá Lagoon National Park, in the northern department of Alta Verapaz, have restored the forest, grow organic cacao which benefits 150 farmers and their families, to be expanded to 500 this year, produce honey, and make sustainable use of the forest.

“One of the best solutions for conserving protected areas is working with the people on a small-scale. We have a strengthened, organised community that is economically sustainable. That shows it is better to invest in communities rather than just barging in with major infrastructure projects,” said Grethel Aguilar, the regional coordinator of the IUCN office for Mexico, Central America and the Caribbean.

Citing an example for IPS, she said that next January the IUCN would launch a project in the jungle in the south of Mexico and northern Guatemala and Belize, with close to nine million dollars in financing from the German Development Bank (KfW), to protect the forest and offer productive opportunities for local residents, who are mainly indigenous.

Franco said “we want to expand the areas under community management. Serraniagua proposes identifying key actions for conserving the forests, which protect the water sources of rural communities.”

Orozco, who is waging her battle a few hundred kilometres to the north, is not willing to accept any hydropower dam. “We will not benefit economically. We want development, public works that will take care of the water, but that don’t affect our culture and identity,” said the activist, whose network has brought several lawsuits against the Las Cruces dam.