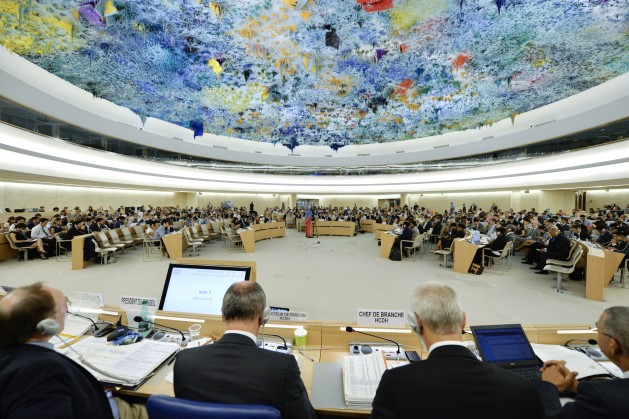 UNITED NATIONS, Oct 7 2016 (IPS) - The Human Rights Foundation (HRF) and the UN Watch have called on UN member states to oppose the bids of some of the major human rights abusing governments from joining the Human Rights Council (HRC).

“This is absurd and outrageous,” said UN Watch’s Executive Director Hillel Neuer on the potential reelection of certain member states to the HRC.

“[HRC] has failed when it elects some of the worst human rights abusers. Who speaks for citizens? Not the Human Rights Council,” he continued at a press conference.

Geneva-based UN Watch and New-York based HRF cited Resolution 60/251 to remind governments of their obligations to uphold human rights. According to the resolution, which established the council in 2006, General Assembly members must consider candidates’ contribution to the highest standards in the promotion and protection of human rights.

Guided by this resolution and using criteria from various organisations including Freedom House and Reporters without Borders, UN Watch and HRF measured candidates’ suitability for election and found that eight out of 17 countries have poor human rights records and fail to qualify for a seat on HRC.

Among those countries is Saudi Arabia, currently one of 47 members of the Geneva-based council.

The Middle Eastern nation is notorious for its restrictions of freedom of speech and of the press, often prosecuting and imprisoning dissenters and government critics.

Raif Badawi, a Saudi writer and activist, was arrested in 2012 for insulting Islam and was sentenced to 1000 lashes and ten years in prison. He had expressed concerns on the lack of freedoms in the country through his blog.

After the ruling, Haidar received anonymous death threats and escaped to Canada with their children. She continues to work towards the release of Badawi, stating: “Our wish is one—to be reunited again.”

Saudi Arabia, which leads a coalition against Houthi rebels in Yemen, is also responsible for the indiscriminate killing of Yemenis.

The UN Human Rights Office has estimated that there have been over 9,000 casualties since military operations began in March 2015. The UN High Commissioner for Human Rights Zeid Ra’ad Al Hussein noted that the Saudi-led coalition is responsible for twice as many civilian causalities as all other forces put together.

Secretary-General Ban Ki-moon also found that the coalition was responsible for 60 percent of recorded child deaths and injuries, and listed Saudi Arabia as party to conflict who commit grave violations against children. However, the country successfully pressured the UN to remove the listing after threatening to withdraw funding from critical UN programs.

He added that as long as they are in the HRC, Saudi Arabia is able to shield themselves from scrutiny and continue committing human rights violations.

“When human rights abusers get this false badge of legitimacy, they use it to strengthen their dictatorial regime and to crush the morale of political prisoners within their borders,” he stated.

“Failure to act on Saudi Arabia’s gross and systematic human rights violations committed in Yemen and its use of its membership to obstruct independent scrutiny and accountability threatens the credibility of both the Human Rights Council and the General Assembly,” said Director of AI’s Asia-Pacific Program Richard Bennett.

UN Watch and HRF have begun their appeals to UN member states including Canada, the United States, and European Union to comply with the minimum standards of the council by not voting for regimes such as Saudi Arabia.

It would not be the first time a member state was rejected from HRC due to its human rights record. In 2015, three-term HRC member Pakistan failed to win a reelection to the council, a shock that prompted “introspection” to its causes.

In a report prior to the 2016 elections, the UN Watch and HRF found Pakistan unfit as a HRC candidate due to its restrictions on freedom of expression, discrimination against ethnic and religious minorities, and gender-based violence.

In order to achieve such a feat again, Neuer said that member states regarded as “leading champions” at the UN on human rights resolutions must take the lead.

“Samantha Power should be taking the lead but she’s silent—that is unacceptable,” he told IPS.

Samantha Power is currently the U.S. Ambassador to the UN.

“It would be meaningful if democracies not only vote quietly but would speak out and say that we created the human rights council to have a different kind of membership and we need to uphold that,” Neuer continued.

António Guterres, the newly nominated Secretary General, will have a important role to play by ensuring human rights criteria for those elected into HRC, he concluded.

The HRC is composed of 47 member states and will hold elections at the end of October for 14 positions. Alongside Saudi Arabia, UN Watch and HRF called to reject the candidacies of China, Cuba, Egypt, Iraq, Malaysia, Russia and Rwanda from the HRC.