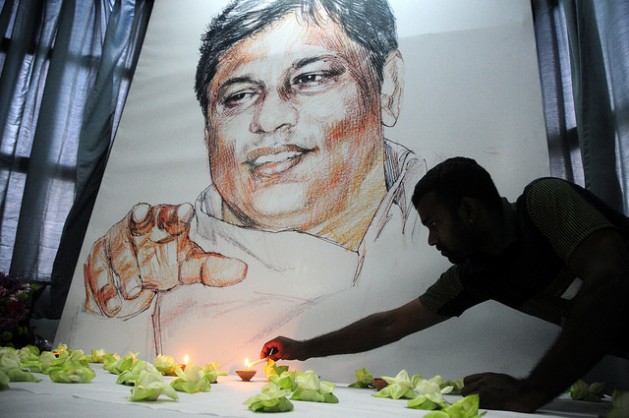 UNITED NATIONS, Nov 1 2016 (IPS) - The UN Educational, Scientific and Cultural Organization (UNESCO) has condemned the killing of more than 800 journalists globally since 2006. A measly seven percent of these murders have been solved.

The protection of journalists and fighting against impunity is part of the UN’s 16th Sustainable Development Goal – to ensure public access to information and to protect fundamental freedoms.

The Committee to Protect Journalists (CPJ) has released their annual impunity index which ranks countries based on the number of journalist murders over the past decade.

CPJ’s 2016 global impunity index, published ahead of the third International Day to End Impunity for Crimes against Journalists on November 2nd, ranks Somalia, Iraq, Syria, Philippines and South Sudan as the top five of thirteen countries with the highest number of journalist murders between September 2006 and August 2016.

“All parties of the conflict in Syria feel free to attack journalists because they know there is no accountability,” -- Mazen Darwish

“Journalist murders are rarely isolated, they are ordered, paid for and orchestrated…40 percent of journalists get threats beforehand,” said Radsch.

Asked whether unconfirmed journalist murders in conflict areas where the journalists ‘disappeared’ are investigated, Radsch told IPS that “a large number of resources goes into investigating such cases but it is incredibly difficult to find information on missing journalists…we have a missing page on our website but any unconfirmed deaths of journalists are not included in the impunity index.”

“More mobilization is required to implement the UN Plan of Action on the Safety of Journalists and the Issue of Impunity, which was spearheaded by UNESCO,” said Irina Bokova, UNESCO’s Director-General.

Bokova further called on member states to increase their efforts towards bringing perpetrators to justice by “developing and strengthening laws and mechanisms in accordance with the international humanitarian law and existing UN resolutions.”

There are currently eight UN resolutions on the subject, including UN Resolution 29, entitled Condemnation of Violence against Journalists, adopted by UNESCO member states in 1997.

A permanent group of friends of UN Ambassadors on the promotion of the safety of journalists was established earlier this year. The group is co-chaired by Lithuania, France and Greece.

“Impunity breeds impunity, this is injustice for us all,” said Bokova.

In a panel discussion on the safety of journalists and ending impunity in conflict situations, organised by UNESCO and the Embassy of Greece and held at the UN, Ambassador Catherine Boura said that local journalists, women journalists, bloggers and freelancers are the most vulnerable targets.

“Only one in 10 cases involving the killing of journalists is resolved- which equals almost complete impunity for perpetrators,” said Boura.

Echoing Boura’s remarks on impunity, UNESCO’s Assistant Director General for Communication, Frank La Rue, said that “in the world today, there is a feeling that if there is no investigation, there is an acceptance of violence as something natural to a journalist because journalism is a dangerous profession…we should break this false perception.”

“There have been 76 cases of journalist executions this year which makes 2016 one of the most violent years of the past decade,” said La Rue.

La Rue listed four key elements of an effective plan to promote safety. These include – analysing the legal framework of freedom of protection, analysing the policies of prevention of violence against journalists and media, establishing an emergency mechanism such as a hot-line, and progressive steps towards the eradication of impunity.

“Every single country that is a member of the UN should have a mechanism to guarantee the safety of journalists…despite the scale of the problem in their country,” said La Rue.

Addressing and preventing arbitrary detention of journalists and sexual harassment of women journalists in particular are also factored into the safety plan.

Though journalists are also being targeted in countries that are not in armed conflict, the panel was mainly oriented towards journalist safety in Syria. Nine journalists have been killed in Syria this year alone.

Mazen Darwish and Abdalaziz Alhamza, both Syrian journalists and recent recipients of prestigious press freedom awards, discussed the dire situation faced by journalists on the ground in Syria.

“All parties of the conflict in Syria feel free to attack journalists because they know there is no accountability,” said Darwish.

Both Darwish and Alhamza were surprised that the UN recently honored Syrian Ambassador Bashar Jafaari, whom Darwish referred to as “the Joseph Goebbels of Syria” and a war criminal.

“I encourage everyone to stand with UNESCO in condemning every fatal attack against a journalist, in calling for full investigation of such crimes, in demanding appropriate punishment for those committing these violations,” said Bokova.