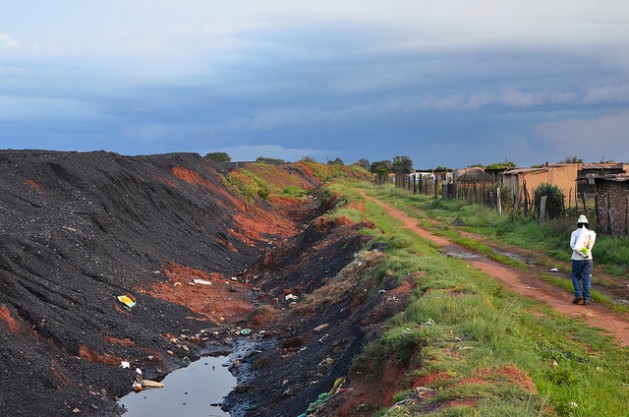 The Masakane village in Mpumalanga sits mere meters away from coal heaps feeding Duvha Power Station. The formal coal industry has failed to bring economic opportunities to local communities, so many residents turn to informal coal mining for an income. Credit: Mark Olalde/IPS

JOHANNESBURG, Dec 28 2016 (IPS) - In a country with unemployment rising above 25 percent, South Africans are increasingly looking for job creation in small-scale mining, an often-informal industry that provides a living for millions across the continent.

“How do you make formalisation not kill their businesses but rather improve their businesses?" --Sizwe Phakathi
Estimates for the number of small-scale miners in South Africa range from 8,000 to 30,000. Across the African continent, estimates put the number of such miners around 8 million. Roughly another 45 million are thought to depend on their income.

According to the United Nations’ African Mining Vision, almost 20 percent of Africa’s gold production and nearly all the gemstone production besides diamonds are mined by small-scale miners.

Sizwe Phakathi, now the head of safety and sustainable development at the Chamber of Mines, previously researched informal coal and clay mining in Blaauwbosch, KwaZulu-Natal with the Minerals and Energy for Development Alliance and the African Minerals Development Centre.

“We can’t classify it as ‘illegal mining.’ This has been happening for years, and people got to mining this area through customary practices,” he said. 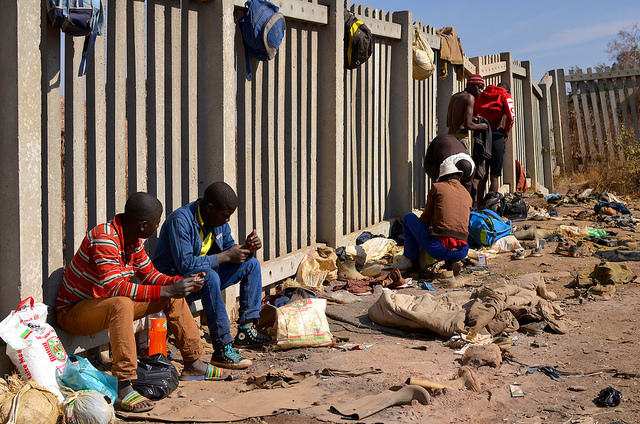 These miners are often unaware of the law and operate with permission from the local chief or municipality but without a valid mining permit. In the community Phakathi studied, 94 percent of the miners had never held a mining permit and many did not know of the relevant legislation.

“Many of these people that work there, many of them are breadwinners of their households, and they are heads of households,” Phakati said.

Pheaga Gad Kwata, director of the Department of Mineral Resources’ (DMR) small-scale mining division, believes that bringing these miners into compliance would allow them greater access to technical knowledge and markets.

“We’ve realized that it is one of the activities where you can probably get a job quickly,” Kwata said, adding that the DMR is busy with workshops to educate miners on the benefits of working within the law. 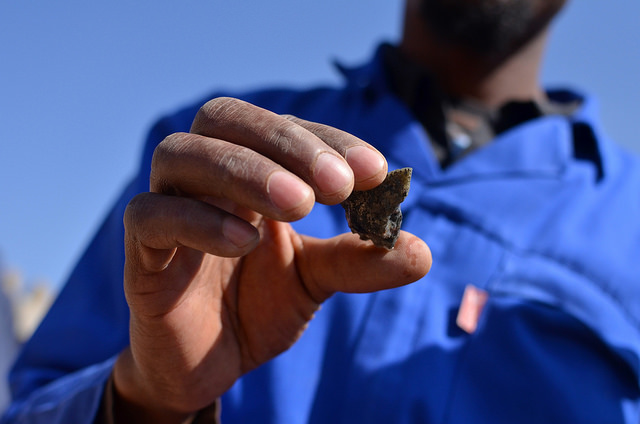 An artisanal miner in Johannesburg displays ore. Activists argue that formalizing small-scale mining could create jobs and allow for the implementation of health and safety regulations. Credit: Mark Olalde/IPS

This type of cooperation could assist Jiyana Tshenge, who works with the Prieska Protocol, a program aimed at linking the small-scale miners of a semiprecious gemstone called tiger’s eye to a lapidary and onward to international markets. This streamlined approach is expected to significantly increase the wages of the miners by cutting out the middlemen operating in the informal economy.

A lack of this market access, though, has tabled the project for the moment.

“If we can establish that market and establish a proper plan, we will then go back and engage with the people of the community properly,” Tshenge said. “I think we can create a lot of jobs.”

According to Phakati, an immediate benefit of regulation would be the implementation of health and safety standards, something he found severely lacking in his research. In his case study, the vast majority of workers never used personal protective equipment such as hardhats, goggles or gloves. The local Mzamo High School also had to be relocated when mining encroached on the school and released harmful gases. 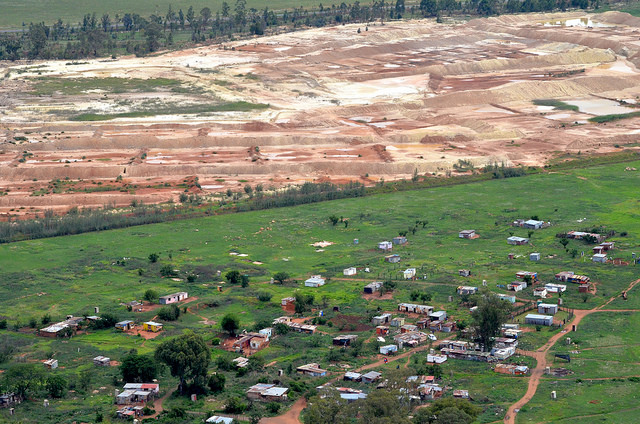 The Matariana informal settlement houses illegal gold miners on the Blyvooruitzicht Gold Mine, about 50 miles west of Johannesburg. South Africa is home to more than 6,000 abandoned mines, many of which attract small-scale miners. Credit: Mark Olalde/IPS

However, formalisation is slowed by the very poverty it is meant to alleviate. Small-scale miners have trouble paying for transport to the DMR’ offices, which are often far from their communities. The costs associated with procuring a permit – such as setting aside a financial provision for environmental rehabilitation and producing environmental impact assessments – also continue to present a barrier to entry.

Pontsho Ledwaba of the University of the Witwatersrand’s Centre for Sustainability in Mining and Industry argues that legislative changes are necessary to smooth the formalisation process. Mining permits currently must be renewed every few years, which could make it difficult to guarantee a return for anyone lending money to these miners. The amount of land allocated in mining permits also weakens these operations’ financial sustainability.

“Five hectares is actually too small for some of the minerals. For granite, sandstone, it’s too small. In terms of investment, [small-scale miners] don’t get investment because two years, five years is a small time to break even and pay back,” Ledwaba said.

According to Ledwaba, the government needs to aim regulations toward historic mining sectors that already operate nearly legally.

“The bulk of them actually mine what we called industrial and construction minerals. These are your sands, your clay, your sandstone,” Ledwaba said. “Those are the ones government has tried to move to the legal space.”

Many of these sectors operate outside the law simply because the relevant legislation came into effect after mining began.

Besides the economic barriers to formalisation, experts agree that sweeping changes to small-scale mining cannot succeed without the participation of female miners.

Between 40-50 percent of Africa’s small-scale mining workforce is female, according to research from the international relations consulting firm German Federal Enterprise for International Cooperation.

“Clearly one of the beneficiaries of formalising this is you should create employment for women,” Phakati said. “The formalisation and development of this sector need to target women.”

In rural South African provinces such as Limpopo, women have mined clay for generations. In other areas such as the North West, there are examples of mining permits held by women. Although mining is seen as a male-dominated industry, experts say small-scale mining can be a breeding ground for female entrepreneurship.

“I’ve come across a number of operations actually owned by women,” Ledwaba said. “[Formalisation] will definitely have a gendered impact.”

Mark Olalde’s work is financially supported by the Fund for Investigative Journalism, the Fund for Environmental Journalism and the Pulitzer Center on Crisis Reporting.