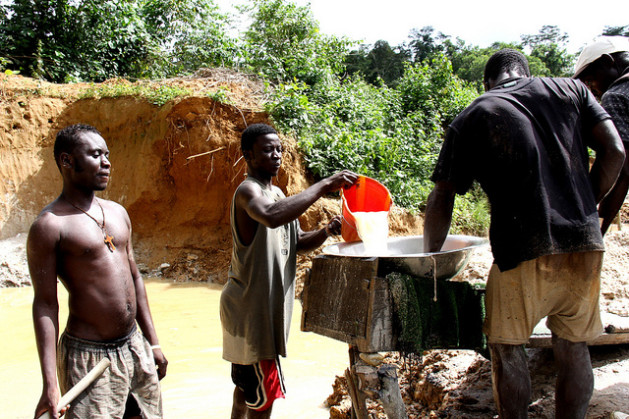 A group of men work a surface gold mine deep in the forest in Gbarpolu County, northwest Liberia. Credit: Travis Lupick/IPS

DAKAR, Mar 27 2013 (IPS) - Congolese small-scale miner Elizabeth Tshimanga has made a successful living from prospecting. But like many artisanal miners in Africa, hers has been a long and tough journey marred by harassment and disputes over her legal status as a miner.

The 50-year-old started working in Kasai region in central Democratic Republic of the Congo (DRC) at the age of 25, before moving to neighbouring Angola where she continued mining diamonds.

“I encountered my biggest challenges in Angola, where security forces and officials harassed miners and dealers, detained us, and forced many women to have sexual relations with them to avoid trouble – they even took women to the bush to gang-rape them if they refused their sexual advances,” she says.

“But life goes on. You just tell yourself it’s all part of life,” she tells IPS, before boarding a plane from Dakar to Brussels, where she was due to sign some business deals.

Tshimanga does not mine any longer. But she employs 10 small-scale miners – six in the DRC and four in Angola – and says the harassment and inability to obtain mining licences continues.

The incidents of rape continue too, she says, adding she witnessed one incident only a few years ago in Angola. But as long as governments refuse to recognise artisanal and small-scale mining (ASM) as a job, she says, the problems and challenges will not go away.

According to the South African Institute for International Affairs (SAIIA), a non-governmental research institute, ASM activities in Africa engage over eight million workers, who in turn support about 45 million dependents.

The institute says that artisanal diamond miners in the Marange diamond fields of Zimbabwe increased from a handful in 2004 to an estimated 35,000 in 2007. In Ghana, ASM contributed nine percent of total gold production in 2000, but by 2010 this had risen to 23 percent, with over a million Ghanaians directly dependent on ASM for their livelihoods.

Cultural anthropologist Marieke Heemskerk, who has over 30 years of experience researching the ASM sector and working with artisanal gold miners in Latin America, Nigeria and Senegal, among others, says the biggest challenge facing small-scale miners is their legal status.

“It is difficult to invest in a proper mining business without a mining title because banks will not give out loans and the miner himself has no certainty that he will be allowed to stay at a certain place.

“In many countries, the licensing process is lengthy, bureaucratic, complex, not transparent and even corrupt. As a result, wealthy and powerful people may obtain mining titles, but poor people in the hinterlands without the necessary political connections cannot.”

It is an obstacle that Tshimanga still comes across. “The other problem is mining licences, it is too complex and complicated to get one. You have to be politically connected or, if you are a woman, you have to become a girlfriend of one of these high-ranking officials before you get one,” she says.

According to the SAIIA, artisanal and small-scale mining is a thorny issue for both governments and large-scale mining (LSM) companies because often the artisanal miners operate in remote, unregulated and environmentally sensitive areas, are difficult to tax and pose a security challenge as they operate on the verge of LSM sites.

Heemskerk, who is based in Suriname, in northern South America, adds: “In many places we see government actions against untitled miners, ranging from bombing them to burning their equipment to simply chasing them away with the military.”

Adama Dieng is an uneducated, small-scale miner from Senegal who made a small fortune in Angola. He owns a three-storey building, has opened three mini-supermarkets in Dakar and has business interests across West Africa. He has even sent four of his children to Europe and put five of them through school.

But his wealth has come the hard way, from small-scale mining in the midst of Angola’s civil war, which began in 1975 and continued on and off until 2002.

“We went through all sorts of dangers, including regular detention, beatings and extortion by the army and rebels, and we faced death.” It is no wonder that he says small-scale mining is “one of the most dangerous but lucrative sources of livelihoods.”

“I still have a lot of respect for the sector for providing jobs to millions and taking many people out of poverty globally, despite its risks,” he tells IPS.

But he criticises the negative attitude of African governments and large mining companies towards ASM.

“The soil of a country and all its resources belong to every citizen of that country, but politicians and big companies just want everything for themselves. Most people in Africa are poor, and these guys are doing nothing for us. We are suffering while the politicians and LSM bosses are living like kings and princes. Why don’t they give us a chance to try improving our lives?” he asks.

Sarah Best, a senior researcher at the London-based International Institute for Environment and Development (IIED), a non-profit organisation promoting sustainable patterns of world development, tells IPS that instead of suppressing ASM activities, which often makes the situation worse, governments and big business should change their mindsets and recognise ASM as both highly productive and as a legitimate part of the mining sector.

“Governments have largely left small-scale mining on the margins. The first step to cooperation is building knowledge and a shared understanding of the sector,” Best says.

She also says IIED’s recent research on ASM has pointed to three major gaps in how knowledge shapes policy. “First, the knowledge that does exist is poorly shared. Second, the experience of small-scale miners and local communities is largely overlooked.

“Third, there is no multi-stakeholder space where committed individuals and organisations from different parts of the sector can come together to build trust, learn, innovate and find shared solutions,” she says.

Cultural anthropologist Heemskerk says that the legalisation and formalisation of small-scale gold miners would be a good first step to address many health, social, and environmental problems faced in the sector.

“You cannot regulate people who are considered illegal. We also must not forget that small-scale gold mining offers a job to millions of poor people, who may not have many alternative income-generating options.

“As such, it is an outlet for socio-economic problems. It reduced rural-urban migration (thus preventing the growth of huge shantytowns around the large cities) and increases consumption – as virtually all the money earned by local small-scale gold miners is spent in the country.”