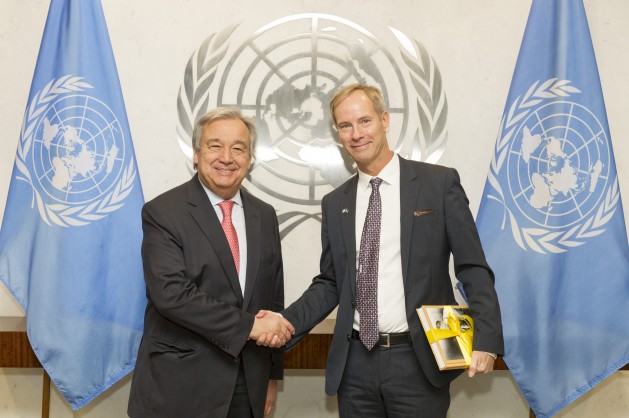 UNITED NATIONS, Jan 6 2017 (IPS) - Five of the UN Security Council’s 15 seats were filled by new members this week, but a bigger shift in the council is expected later this month under the new US administration.

The council’s five permanent members are considered to be the most powerful, since they hold the ability to veto any vote they disagree with.

This is why the change in the United States administration may signal a greater political shift in the council than the rotation of non-permanent members.

The possible change was foreshadowed by President-elect Trump in December following a controversial vote on Israeli settlements.

The United States took the surprise decision to abstain from the vote condemning Israeli settlements in the disputed territory of the West Bank, rather than using its veto power.

“As to the U.N., things will be different after Jan. 20th,” Trump tweeted shortly after the vote took place.

US Ambassador to the UN Samantha Power – a member of President Barack Obama’s cabinet – defended the abstention saying, “Israeli settlement activity in territories occupied in 1967 undermines Israel’s security, harms the viability of a negotiated two-state outcome, and erodes prospects for peace and stability in the region.”

Power is expected to be replaced by Trump’s pick for the council, Nikki Haley, the current Governor of South Carolina, after Trump’s inauguration on January 20.

However Sweden’s Ambassador to the UN, Olof Skoog downplayed the political implications of the change in US administration for the Security Council.

“I haven’t spoken with anyone from the administration of the President-elect, but I expect that when they come to look at the work we’re doing they’ll see it is in the interests of the United States,” Skoog told journalists on Tuesday.

With January bringing a new US president, a changed Security Council and a new UN Secretary General Antonio Guterres, Skoog said that he hoped to harness this “spirit of newness” to spur momentum into the Council’s work.

However Skoog said he was not expecting particular challenges to the Security Council’s work to come from the incoming US administration, with whom he said he looked forward to collaborating.

Skoog described Power as a strong voice with whom he shares many views. He said he also had a working relationship with Haley, but would not be drawn on possible changes regarding Israeli-Palestinian policy within the council.

Sweden has officially recognised the state of Palestine, putting it at odds with Trump’s pro-Israel stance.

Meanwhile, Italian Prime Minister Paolo Gentiloni said that he hoped Italy could bring the Israel-Palestine conflict “to the forefront of the United Nations’ agenda,” during their month as president in November. Migration from the Middle East and Syria are also expected to be among the issues Italy will prioritise. Italy will be represented by Ambassador Sebastiano Card.

In a new and unusual step, Italy will share its security council seat with the Netherlands due to an impasse vote in the UN General Assembly for the final European seat. Italy will sit on the council in 2016 and the Netherlands in 2017. Gentiloni described the move as “a message of unity between European countries.”

2016 will be the first time that Kazakhstan will sit on the Security Council. The Central Asian country – which is keen to be seen as a major international power – will be represented by the ex-Ambassador to the United States Mr Kairat Umarov.

Kazakhstan – a part of the Central Asian Nuclear-Weapon-Free Zone – may also bring a different perspective to Security Council discussions on nuclear non-proliferation. President-elect Trump’s comments on nuclear weapons have signalled that this may be an area high on the UN’s agenda in 2017.

Succeeding Venezuela as the Latin American representative, and holding a seat on the Council for the first time since 1979, is Bolivia. The plurinational state is represented by the Sacha Llorenti, a published author who spent two years at the President of Bolivia’s Permanent Assembly for Human Rights and was a minister in the government of Evo Morales.

Llorenti resigned from the ministry in 2011 following a violent police response to protesters marching against the building of a road through the Amazon rainforest. This was not the first time Llorenti was involved in clashes between indigenous populations and infrastructure.

Ethiopia replaces Angola and joins Senegal as an African representative on the Council. Ethiopia has become a major contributor of over 8,000 troops to UN peacekeeping operations. However in 2016, Ethiopia faced political instability within its own borders amid crackdowns on protestors.

In its first month on the council, Sweden has also taken up the rotating position of President. Skoog told press on Tuesday that the council’s priorities for January would include Syria, South Sudan and the Congo.