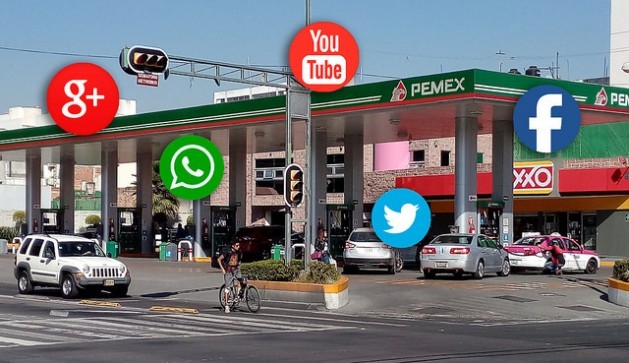 The social networks have played an important role in citizens’ initiatives to organise protests against the gas price hike in Mexico and in the government’s strategy to curb cyber-activism. Credit: Emilio Godoy/IPS

MEXICO CITY, Jan 19 2017 (IPS) - The scene in the video is simple: a bearded man with a determined look on his face sitting in front of a white wall witha portrait of Emiliano Zapata, symbol of the Mexican revolution.

“Mexicans to the battle cry, the moment has come to overthrow the corrupt political system we are under, it is now or never. We will show what we are made of. With just two steps we will be able to write a new history, which our children and grandchildren will also enjoy,” lawyer Amín Cholác says emphatically.

In the video titled “Mexicans to the cry of: Peña out!,” Cholác urges people to take part in demonstrations and acts of civil disobedience against the rise in fuel prices adopted Jan. 1 by the government of conservative President Enrique Peña Nieto.

“I made this video because we cannot stand it anymore, this country cannot take it any longer,” the founder of the non-governmental organisation Dos Valles Valientes, who lives in the southern state of Chiapas, told IPS.

“It has been well received, people from all over the country have joined, they have communicated via social networks or by phone. But I have also been threatened, they put an image of hitmen, they insulted my mother, but if I had been scared, I wouldn’t have done it,” said Cholác.

The activist, whose organisation fights increases in electricity rates, said “the networks are a double-edged sword. They have worked extraordinarily well for us, because they are very accessible and cheap. Whatsapp reaches every corner, as do text messages.”

The video’s wide dissemination reflects the growing use of the Internet in Mexico to drive political and social movements, such as the resistance to fuel price increases. But the social networks also serve to promote counter-attacks against citizen initiatives by the political powers-that-be and the spreading of misinformation and propaganda by the other side.

The up to 20 per cent hike in fuel prices unleashed the latent social discontent, with dozens of protests, looting of shops, roadblocks, and blockades of border crossings throughout the country, as well as a wave of lawsuits filed by trade unions and organisations of farmers, students and shopkeepers.

The simultaneous price rises for fuel, electricity and cooking gas were a spark in a climate of discontent over the public perception of growing impunity, corruption and social inequality.

The protests, which have waned somewhat but show no signs of stopping, have led to at least six deaths, the arrests of 1,500 people, and the looting of dozens of stores. 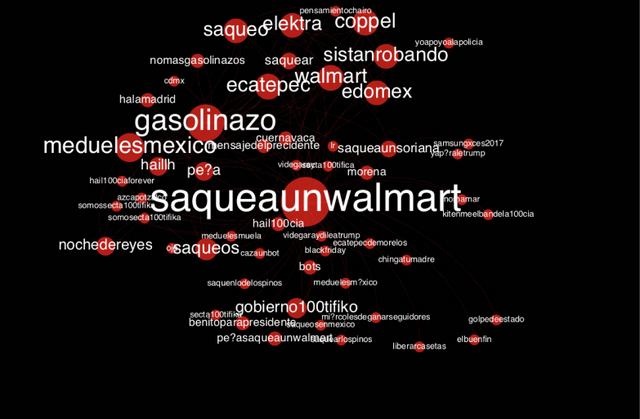 Topics addressed by accounts implicated in the dissemination of fear messages in the social networks to neutralise the protests against the fuel price hikes in Mexico, which were also promoted over the same networks. Credit: Courtesy of Rossana Reguillo

“The protests in response to the price rises arose from spontaneous calls disseminated on WhatsApp, Facebook and Twitter. A call started to circulate for people to not fill their gas tanks for three days, and around new year’s day the calls for protests started, mainly along the border,” said Alberto Escorcia, with the group Loquesigue TV.

On Jan. 4, the group published an analysis of the rumours and calls to violence, which were fed by 650 Twitter accounts and more than 7,600 messages – allegedly false accounts used to fight back against the protests.

As a result of the group’s publications, Escorcia received threats, he told IPS.

According to a study carried out last year, in 2015 Internet penetration in Mexico was 59 per cent, in a population of 122 million, in spite of there being almost one mobile phone per inhabitant. This is an indication of the relative power of digital democracy in this country.

“Between Jan. 2 and 3 the ‘gasolinazo’ (the price rise) was going to be an important trending topic, because it is a noble theme, in the sense that it attracts a variety of sectors and affects society as a whole,” expert Rossana Reguillo told IPS.

“But on Jan. 4, the countertrend started. ‘Bots’ and ‘trolls’ gained visibility, giving rise to other trends. The (protests against the) gasolinazo started to lose ground,” said Reguillo, the head of the interdisciplinary laboratory Signa Lab, at the private Western Institute of Technology and Higher Education.

The lab examined Twitter and detected more than 10,000 accounts involved in the dissemination of some 15,000 messages aimed at neutralising the social unrest. Standing out in this effort were the online groups Legión Hulk and SomosSecta100tifika (which translates into ‘We are a scientific sect‘). The latter promotes the trending topic #GolpeDeEstadoMx (Pro Coup D’etat Mexico).

This counteroffensive shows how the citizens‘ online mobilisation triggers a response from the powers under attack, as well as threats against activists, such as the ones received by Cholác and Escorcia.

“We have found a pattern of fear-mongering and anonymous calls similar to what we saw ahead of the inauguration of Peña Nieto (in December 2012), when weeks before, rumours of looting began to circulate,” said Escorcia.

In his opinion, “this time there was greater damage, because the fear of going out and the encouragement for people to get involved in the looting spread from the web to the streets,” he said.

A precedent to this was the reaction sparked by the notorious quote by then Attorney-General Jesús Murillo, who said “I´ve had enough“ in November 2014, referring to the unresolved case of the forced disappearance in September of that year of 43 student teachers in Ayotzinapa, in the southern state of Guerrero.

That expression generated the trending topic on Twitter #YaMeCansé (“I‘ve had enough“), as well as an attempt to neutralise it.

A study “On the influence of social bots in online protests; Preliminary findings of a Mexican case study“, published last September by academics from Mexico and the United States, concluded that there was an important presence of bots, which simulate human beings, affecting discussions online about the case of the missing students.

This phenomenon is widespread, and in Latin America the experts consulted by IPS mention in particular the case of Brazil, during the lengthy process that lead to former president Dilma Rousseff’s impeachment and removal from office, in August 2016.

Their hypothesis is that companies dedicated to these services work for governments and political parties to silence online dissent.

In the case of Mexico, Escorcia said “there are companies that generate anything from online attacks to fake news items and political campaigns, which have worked for all kinds of organisations: left-wing, right-wing, and obviously for the PRI,” the governing Institutional Revolutionary Party.

For Reguillo, who has also been a victim of social network attacks on several occasions, the main question is who is behind this cyber activity.

“There is money involved here, it’s not a group of young people who say ‘let‘s crash the web‘. There is a clear strategy to silence debate, to invade the public space and turn Twitter into a battlefield. They destabilise the space for discussion,” she commented.

“Nobody can stop this. People have become aware and are protesting,” said Cholác, who is calling for mass demonstrations on Feb. 5.