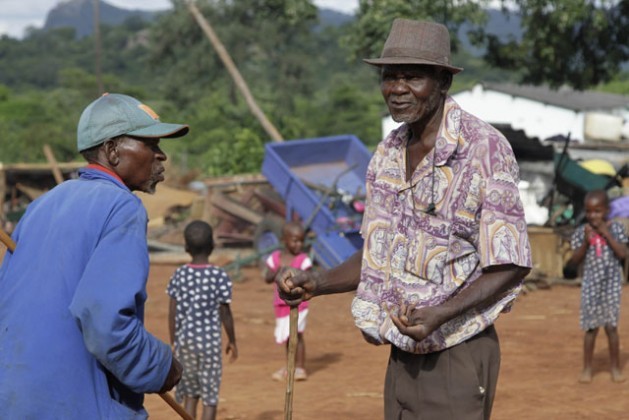 The proportion of persons 60 years and older is projected to almost double during 2000–2030 in South Africa. Credit: Jeffrey Moyo / IPS

Canberra, Philadelphia and Manchester, Feb 20 2017 (IPS) - Old age is often characterised by poor health due to isolation, morbidities and disabilities in carrying out activities of daily living (DADLs) leading to depression.

Mental disorders—in different forms and intensities— affect most of the population in their lifetime. In most cases, people experiencing mild episodes of depression or anxiety deal with them without disrupting their productive activities. A substantial minority of the population, however, experiences more disabling conditions such as schizophrenia, bipolar disorder type I, severe recurrent depression, and severe personality disorders. While common mild disorders are amenable to self-management and relatively simple educational or support measures, severe mental illness demands complex, multi-level care that involves a longer-term engagement with the individual, and with the family. Yet, despite the considerable burden and its associated adverse human, economic, and social effects, governments and donors have failed to prioritise treatment and care of people with mental illness. Indeed, pervasive stigma and discrimination contributes to the imbalance between the burden of disease due to mental disorders, and the attention these conditions receive.

The percentage of the population aged 60 years and above in South Africa rose from 7.1% in 1996 to 8 % in 2011, an increase from 2.8 million to 4.1 million individuals. The proportion of persons 60 years and older is projected to almost double during 2000–2030 because of (i) a marked decline in fertility in the past few decades; (ii) the HIV and AIDS pandemic contributing to this change in the population structure, with a higher mortality of young adults, especially women of reproductive age; and (iii) a rise in life expectancy to 62 years in 2013-– a staggering increase of 8.5 years since the low in 2005.

Four in ten elderly persons in South Africa are poor. More than a third make an average living, and the rich constitute about 27%. Provincial variations show that rural provinces have higher proportions of poor elderly persons compared to those residing in the urban provinces. Racial differences show that elderly Whites and Indians/Asians occupied a higher socio-economic status than black Africans and Coloureds.

Aging is a major factor in depression. Those in early 60s are generally more depressed than older persons in their 70s and 80s.

Old women were consistently more depressed than old men, as they are subject to violence. It is associated with conflicts over the man’s drinking, the woman having more than one partner, and her not having post-school education. Another factor is that women are typically much more likely to be overweight and obese, leading to non-communicable diseases (NCDs) and subsequently higher depression . A challenging aspect of obesity prevention among black South Africans is the positive perception that both women and men attach to a large body size.

Married men and women are less depressed than others. Marriage thus serves as a barrier to loneliness and a source of support during periods of stress for old persons. However, old persons in larger households without any other old person are more prone to depression. It is not clear whether larger households result in neglect of old persons or their abuse.

Ethnicity matters. The Africans are more prone to depression than the reference group of the Whites and Coloureds. There is limited evidence suggesting that Asians/Indians/Others are less likely to be depressed.

Pensioners are less likely to be depressed despite some evidence in the literature on pooling of pensions with other household resources and denying the pensioner any financial autonomy. Although this can’t be ruled out, it is evident that the favourable effect of pensions in preventing depression is robust.

Of particular significance are the results on multimorbidity (more than one disease at a time). Two combinations of NCDs (diabetes and high BP, and cancer and heart disease) are positively associated with depression. Equally important are the associations between disabilities in activities of daily living or DADLs (e.g. difficulties in dressing,bathing, eating, walking, climbing stairs) and depression. In many cases, both sets of DADLs are positively associated with depression. The relationship between depression and body mass index or BMI categories (underweight, normal, overweight and obese) is not so robust except that in some cases overweight were less likely to be depressed than the reference category of obese.

Shock of a family member’s death (in the last 24 months) was robustly linked to higher incidence of depression. There is some evidence suggesting that this shock had stronger effects on women relative to men.

As loneliness and lack of support during a difficult situation can precipitate stress leading to depression, we experimented with measures of social capital and trust as barriers to depression, and the mediating role of preference for the same neighbourhood.

Although older people are in worse health than those younger, older people use health services much less frequently. These patterns of utilization arise from barriers to access, a lack of appropriate services and the prioritization of services towards the acute needs of younger people.

A larger ethical issue is rationing of health care to older people on the notion that health services are scarce and must be allocated to achieve the greatest good for the greatest number of people. WHO 2015 rejects this view on two counter-arguments: older people have made the greatest contribution to socioeconomic development that created these services; and they are entitled to live a dignified and healthy life.

Mental health care continues to be under-funded and under-resourced compared to other health priorities in the country; despite the fact that neuropsychiatric disorders are ranked third in their contribution to the burden of disease in South Africa, after HIV/AIDS and other infectious diseases. In fact, mental health care is usually confined to management of medication for those with severe mental disorders, and does not include detection and treatment of other mental disorders, such as depression and anxiety disorders.

From this perspective, the proposed National Mental Health Policy Framework and Strategic Plan 2013-2020 is a bold and comprehensive initiative.