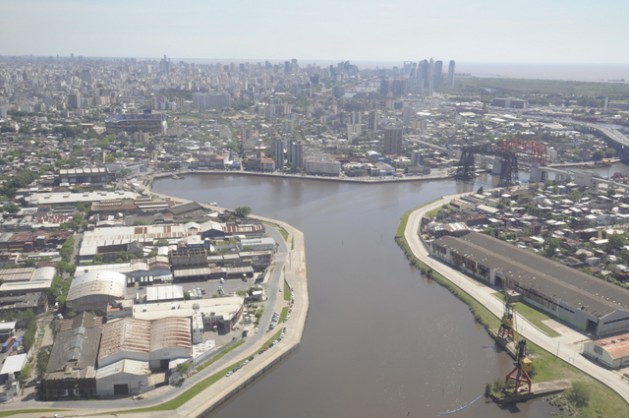 A view of Buenos Aires from the point where the Riachuelo flows into the Rio de la Plata. To the left can be seen the famous Boca Juniors stadium. Chronicles from 200 years ago were already talking about the pollution in the river. Credit: Courtesy of FARN

BUENOS AIRES, Feb 11 2017 (IPS) - Is it possible to spend 5.2 billion dollars to clean up a river which is just 64-km-long and get practically no results? Argentina is showing that it is.

As the government admitted to the Supreme Court of Justice in late 2016, that is the amount of public funds earmarked since July 2008 for the clean-up of the 64-km Matanzas-Riachuelo river, which has been identified as one of the worst cases of industrial pollution in the world.

The river cuts across 14 municipalities as it runs from the western Buenos Aires working-class suburb of La Matanza to the picturesque neighbourhood of La Boca, where it flows into the Río de la Plata or River Plate.

“It’s true that Acumar has never done a good job. But this past year was the most disastrous. So much so that the president of the body did not even appear at the hearing before the Supreme Court.” -- Andrés Nápoli

However, the situation remains practically unchanged since the mid-19th century, when chronicles of the time described the “rotten” state of the river. Today an estimated eight million people live in the river basin, facing a serious health and environmental emergency.

“The Riachuelo river is still serving the function of drainage for the economic and human activities in the city of Buenos Aires and a large part of the Greater Buenos Aires, as it has for the last 200 years,” says a more than 200 page report seen by IPS, which the Matanza Riachuelo Basin Authority (Acumar), the official body in charge of the clean-up, submitted to the Supreme Court on Nov. 30, 2016.

“It’s not just highly polluted, but it continues to be contaminated,” said the document, which added that 90,000 tons per year of heavy metals and other harmful substances are currently dumped into the river..

In the Spanish colonial era, sheep and mule meat salting factories were built along its banks, along with tanneries that processed cow leather. Dumping waste into the river became a common practice that turned it into a veritable open sewer, which continued with more modern industries like petrochemical plants and the meat-packing industry.

In the last few decades, official promises to clean up the Riachuelo have abounded. The one perhaps best remembered by Argentines was made by María Julia Alsogaray, environment minister under then President Carlos Menem (1989-1999), who announced that they would do it in just 1,000 days. An enthusiastic Menem said that when they were finished, he would swim in the Riachuelo.

In the end, the river remained a health threat, Menem decided not to swim, to protect his health, and Alsogaray ended up in prison for corruption.

It seemed that this story could begin to change in July 2008. Or that was what the Argentine environmentalist community thought, unanimously describing as “historic” the Supreme Court ruling that ordered national, provincial, and Buenos Aires authorities to clean up the Riachuelo.

The decision was based on an article added to the constitution in 1994, which guarantees all inhabitants in the country a “healthy environment” to live in.

However, the scant progress made so far was crudely exposed during a Nov. 30, 2016 hearing before the Supreme Court. 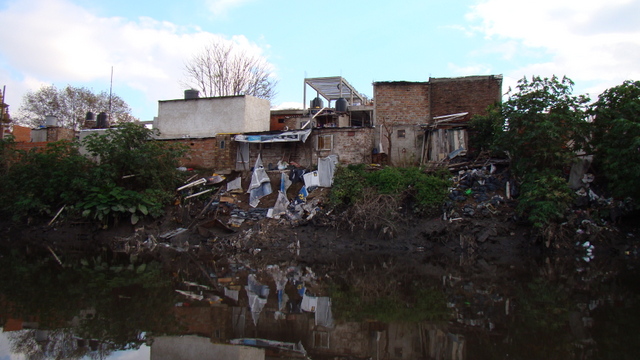 Thousands of poor families living along the Riachuelo en Buenos Aires face serious environmental and health threats. In 2008, the Supreme Court ordered the government to relocate them, but only 3,147 of the promised 17,771 housing units have been built so far. Credit: Courtesy of FARN

That day Supreme Court president Ricardo Lorenzetti, an expert in ecology designated Goodwill Ambassador for Environmental Justice last year by the Organisation of American States (OAS), did not try to hide his disgust.

During the hearing, Gabriela Seijo, director of operations in Acumar, said that, for example, so far only 3,147 of 17,771 housing units which were to be built to relocate the families most exposed to the pollution have been completed. “If we keep up this pace, we will finish in 2036,” she said.

“The situation that we found was terrible. Not just because the Riachuelo was degraded and polluted to the same extent as, or worse than, when the judgment was handed down, but also because the body in charge of cleaning it up, Acumar, was not in a position to comply with the court order,“ Bergman told the Court.

However, the government of President Mauricio Macri, in office since December 2015, and Bergman himself have been in the administration for over a year and have not yet made progress towards the goals set for Acumar, which has 900 employees, many of whom were hired in 2016.

It was reported that 34,759 inspections in factories have been carried out and 57 plants have been closed down, but all of them temporarily, with no significant impacts on the environment.

According to figures provided by Acumar, there are currently six million people living in the basin, at least 10 per cent of them in some 60 slums and shantytowns.

“It’s true that Acumar has never done a good job. But this past year was the most disastrous. So much so that the president of the body did not even appear at the hearing before the Supreme Court,” lawyer Andrés Nápoli, head of the Environment and Natural Resources Foundation (FARN), one of the five non-governmental organisations appointed by the Supreme Court to monitor compliance with the ruling, told IPS.

Indeed, Torti did not appear at the hearing in November and, a few days after the poor presentations given by other officials, he resigned.

Macri named as his replacement lawmaker Gladys González of the governing centre-right coalition Cambiemos, who has no background in environmental affairs.

Nápoli said that, after the hearing, he asked Acumar to explain how the 5.2 billion dollars were spent, adding that if the answer was not satisfactory, he would file a lawsuit demanding an investigation into possible corruption.

“They have only cleaned up the riverbanks a little and removed many of the boats that had sunk decades ago,” diplomat Raúl Estrada Oyuela, a member of the Association of La Boca, the neighbourhood where the Riachuelo runs into the Rio de la Plata, told IPS.

“But there is a lack of will to tackle the main problem, which is the pollution of the water, soil and air, because that would mean affecting the interests of the industries, which of course would have to make important investments if they were forced to switch to a clean production system,” said Estrada, who is internationally known in environmental issues and who was president of the committee which in 1997 produced the Kyoto Protocol on climate change.