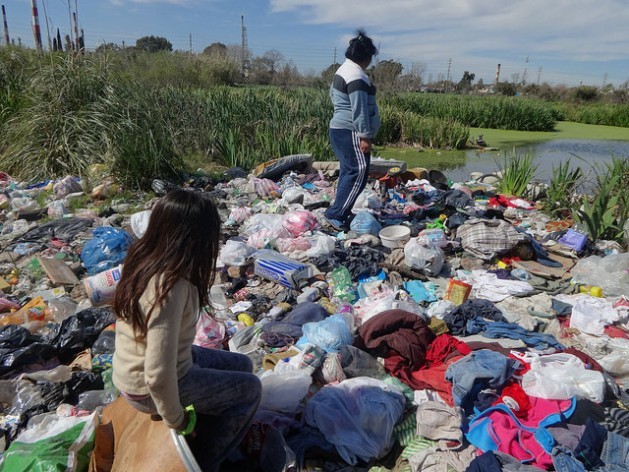 Nora Pavón and one of her daughters in the informal garbage dump behind their home. The swamp acts as a sewer in Villa Inflamable, in the suburb of Avellaneda on the south side of Buenos Aires. Credit: Fabiana Frayssinet/IPS

AVELLANEDA, Argentina, Sep 18 2015 (IPS) - Children have been poisoned by lead in Villa Inflamable, a shantytown on the south side of the capital of Argentina. Resettling their families involves a socioenvironmental process as complex as the sanitation works in one of the most polluted river basins in the world.

As soon as you enter Villa Inflamable, which is located right in the Dock Sud petrochemical hub in the Buenos Aires suburb of Avellaneda, you taste and feel chemicals and dust particles in your throat, saliva and lungs.

But in this shantytown, where more than 1,500 families are exposed to industrial pollution in precarious homes built on top of soil contaminated with toxic waste, the children suffer the problem in their blood.

“When she was one, she had 55 µg of lead in her blood. I had to put her in the hospital,” Brenda Ardiles, a local resident, told IPS, referring to her daughter, who is now three years old. Her other daughter, eight months old, is also suffering from lead poisoning.

Her mother-in-law, Nora Pavón, whose four children also have lead poisoning, said “Every night they get nosebleeds, they can’t stand the headaches, their bones hurt, but since there’s no transportation at night I can’t take them to the emergency room until the next morning.”

Lead poisoning in children is defined by the U.S. Centers for Disease Control as a blood lead level of greater than 10 micrograms (µg) per decilitre of blood.

Lead poisoning can cause learning disabilities and other chronic health problems, such as stunted growth, hyperactivity and impaired hearing. Young children are the most vulnerable.

“One of my daughters is in third grade and the other is in fourth and they don’t know how to read. The doctors said the delay was caused by lead,” said Pavón.

Villa Inflamable suffers from all of the environmental problems that plague the 64-km Matanzas-Riachuelo river, which cuts across 14 Buenos Aires municipalities before it flows into the Río de la Plata or River Plate. Of the more than 120,000 families living in 280 slums along the river, 18,000 are set to be relocated.

On one hand are the companies that pollute the river: petrochemical plants, oil refineries, chemical and fuel storage sites, and toxic waste processing plants.

On the other are the problems typical of poverty, such as substandard housing, flood-prone land, clandestine garbage dumps and a lack of sanitation.

“That lagoon is putrid, I don’t know what they dump there,” said Pavón, pointing to a swamp behind her home surrounded by trash, which functions as a natural sewer in the neighbourhood.

“A lot of kids have diarrhea. The water pipes are polluted and the clandestine connections aren’t safe,” said Claudia Espínola, with the Junta Vecinal Sembrando Juntos, an organisation of local residents that jugs of clean drinking water in Villa Inflamable. 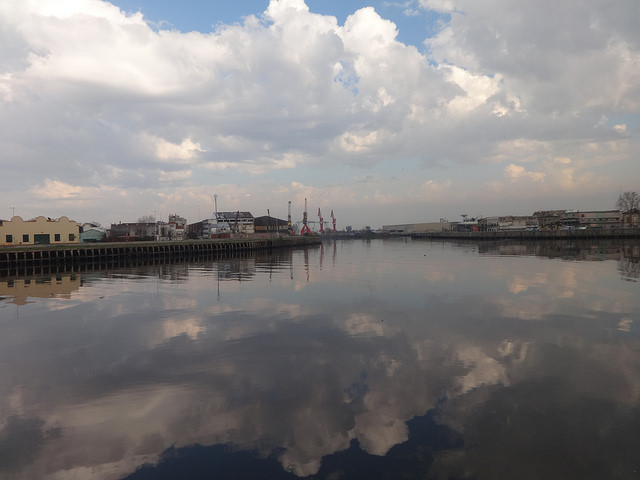 The industrial area in the Riachuelo, with the port in the background, in Buenos Aires. There are 13,000 companies registered by ACUMAR along the riverbank, 7,000 of which are industrial. The agency has identified 1,254 toxic substances. Some 900 factories have presented reconversion plans. Fabiana Frayssinet/IPS

In 2008, the Supreme Court ordered the Matanza-Riachuelo Basin Authority (ACUMAR) – created in 2006 – to clean up the area. In 2011, ACUMAR established an integral environmental clean-up plan.

The plan, whose goals include sustainable development, involves the reconversion of factories, the clean-up of rivers and riverbanks, garbage collection and treatment, water treatment and drainage works, and slum redevelopment or relocation.

It covers a total of 1,600 projects to be completed by 2024, including the construction of 1,900 housing units, with a total investment of four billion dollars.

“They offered us another place, but I said no because we are three families, 15 people living in this house. We couldn’t have fit in the other one, even if we worked wonders,” said Pavón, who did accept the offer of a second housing unit, although she complained that there wasn’t room for the children to play.

Many families did not accept the resettlement, for a variety of reasons. Some did not like the houses offered, while others were simply unaware of how serious the contamination was in their neighbourhood.

“Sometimes the houses are small, and many families are used to large lots. Others work or have their businesses in their homes, they’re garbage recyclers, and they don’t know how they could continue to work there,” Espínola told IPS.

Another reason, more difficult to solve, is the rivalry between the football teams of the old neighbourhood and the new one where they are to be resettled, also in the suburb of Avellaneda.

“It’s a longstanding problem between the fans of the Dock Sud and San Telmo clubs, a rivalry that is sometimes violent. It’s a cultural problem that we think we can work through, which we’re trying to do,” she said.

In Villa Inflamable, an environmental health centre now monitors the levels of contamination.

But according to Leandro García Silva, the head of environment and sustainable development in the Defensoría del Pueblo de la Nación, or ombudsperson’s office, which is monitoring compliance with the court-ordered clean-up, a risk map is needed first.

“The health system doesn’t have many tools to act on illnesses arising from environmental questions because the doctor can’t write a prescription for cleaning up the environment. We need to adapt public health tools to this new problem,” he said. 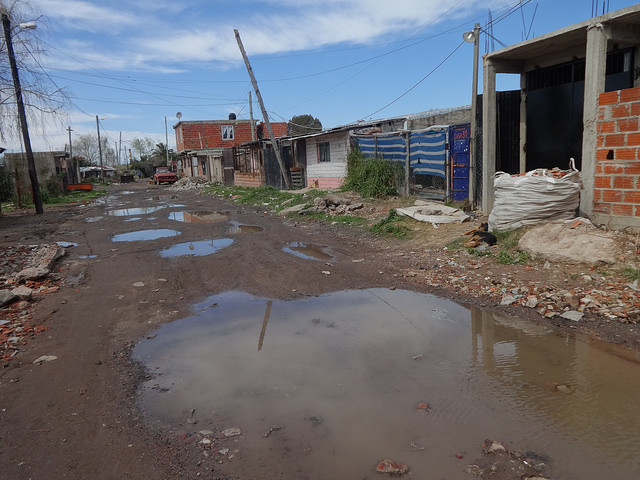 A street in Villa Inflamable, a shantytown in southern Buenos Aires, in the Dock Sud petrochemical complex on the banks of the Matanzas-Riachuelo River. In that neighbourhood, more than 1,500 families are exposed to industrial pollution and toxic waste, which are poisoning their children. Credit: Fabiana Frayssinet/IPS

At the same time, ACUMAR has undertaken ambitious infrastructure projects, like the construction of an 11-km sewage collector and an 11.5-km outfall, with 840 million dollars in financing from the World Bank. The project, which will prevent the direct discharge of untreated sewage into the Río de la Plata, is to be completed in 2016.

ACUMAR director of institutional relations Antolín Magallanes told IPS that the collector is a tunnel on one side of the Riachuelo to carry sewage to two settling tanks in Dock Sud and Berazategui. The tank is already operating in the latter.

“The collector is very important because 70 or 80 percent of the pollution in the Riachuelo comes from sewage. This will almost completely resolves the issue,” he said.

In addition, six waterfall aeration stations will be built to add oxygen to the water, projected by the Argentina’s water and sanitation utility, AySa, and the University of Buenos Aires.

“The clean-up chapter is extremely important; the planned infrastructure works will provide greater sanitation and treatment, above all in sewage effluent and the potable water supply,” said Javier García Espil, coordinator of the Riachuelo team in the Defensoría.

“But if this is not accompanied by environmental management – that is, zoning, monitoring of industries, flood control, and new forms of using this territory – it would be a limited response,” he told IPS.

ACUMAR stepped up inspections in this region, which accounts for 30 percent of Argentina’s GDP.

“We have around 13,000 registered companies, of which some 7,000 are industrial, and we have identified 1,254 pollutants. Some 900 have already presented reconversion plans,” said ACUMAR’s Magallanes.

The Defensoría recognises these advances but says the credit made available for the reconversions and strategic plans has been insufficient.

“The problem is not simply inspecting and adjusting some process, which is necessary but is part of a bigger problem: defining what kind of industries we want in the future – a major pending challenge,” said the García Espil.

“New mechanisms have to be put in place: environmental management with zoning, taking into consideration the capacity of ecosystems, and the complexity of the territory, involving social participation,” said García Silva.

It has been seven years of complex struggle to remedy two centuries of neglect of a river basin which according to Magallanes “has been the historic refuge of millions of people who didn’t have anywhere to go because of social problems.”

Pavón, an immigrant from the northern province of Chaco, summed it up: “I would go back to the Chaco, which is healthier and nicer for raising kids, but there’s no work. I saw on the news that a kid died of malnutrition there.”

She tried to return to her hometown anyway, “to see if the kids’ lead blood levels went down.” But the attempt failed because she couldn’t find work. Between malnutrition and lead, she had to choose lead.