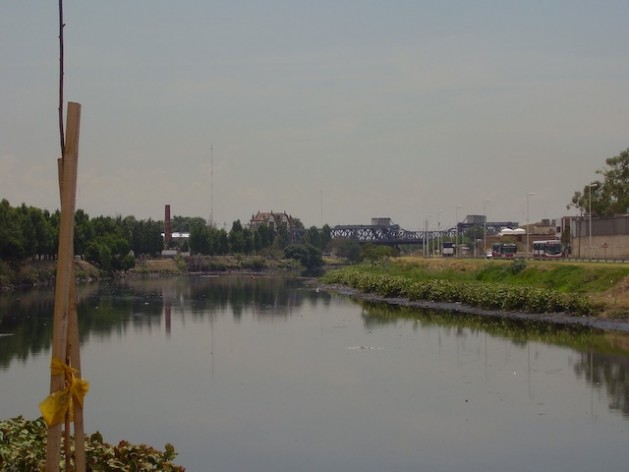 BUENOS AIRES, Feb 12 2013 (IPS) - The process of cleaning up the Matanza-Riachuelo river, which runs through the Argentine capital, shows remarkable progress. But the biggest challenge is purifying the water in the basin, which has been damaged by centuries of neglect.

“We cannot yet see chemical changes in the river,” admitted biochemist Oscar Deina, chief executive of the Matanza-Riachuelo Basin Authority (ACUMAR), which was established in 2006 and is comprised of representatives of the national government, the autonomous city of Buenos Aires and 14 adjoining districts of the province of the same name.

Since ACUMAR began to clean up the river, the banks are clear of garbage and slum housing, and the woodlands have grown back.  The junk in the bed was removed, and systematic checks of industries and construction works are conducted to treat wastewater.

Gone are the islands of floating trash and rusted ship skeletons. But the water still has the same level of pollution as when measurements began five years ago. Oxygen is short, and nitrate, phosphorus, oils, hydrocarbons and heavy metals like arsenic, lead, chromium and copper are abundant.

The river begins with the name Matanza and runs through the northeast of the province of Buenos Aires, changing its name to Riachuelo when it reaches the borders of the Argentinian capital, and flows into the Rio de la Plata, near the famous neighborhood of La Boca.

The 64-kilometre extension of this watercourse and its 232 tributaries form a basin of 2,240 square kilometres, where about six million people live alongside 25,000 commercial and industrial establishments.

The steady polluting of this river’s plains has gone on for more than 200 years.  It has been fed garbage, industrial effluents and untreated sewage, making it the most toxic waterway in the country.

But a 2006 ruling by Argentina’s Supreme Court, which ordered a restoration of the environmental situation of the basin and an improvement in the quality of life of the most affected communities, marked a turning point.

The court appointed Judge Luis Armella to be in charge of enforcing the judgment and periodically reporting on the progress of the cleaning process, though he was subsequently embroiled in a corruption scandal and removed from the case.

Notwithstanding these obstacles, the recovery plan is moving ahead, and non-governmental organisations monitoring the process have recognised progress.

But more than six years after the ruling, the lack of progress in improving the quality of the river remains a concern.

This month, Greenpeace released a report entitled, “Las aguas siguen bajando turbias” (The waters continue to grow murky), which reviews the results of the checks performed on the 60 monitoring points installed by ACUMAR.

The study goes into an analysis of the Association of Residents of La Boca, which recognised that “it is the first time in the disastrous history of two centuries of pollution that improvements (have) materialised in the basin”, but also noted continued pollution.

The study, which denounces ACUMAR’s rules as “very lenient” with industrial wastes, points out that Greenpeace’s analysis indicates that little progress has been made on improving the quality of surface water.

The report also questions the lack of ambition of the recovery plan, which aims to achieve a “passive recreational use” of the river, working just to improve the landscape between those navigating the course or walking along its banks, but not making it possible to have some form of contact with the water.

“There are points where you can see an improvement (in water quality), but these gains are reversed in subsequent tests, meaning that the trend is not favorable,” Riachuelo’s campaign coordinator for Greenpeace, Lorena Pujó, told IPS.

The expert believes ACUMAR should study the ability of the river to purify itself and the level of effluent that it can tolerate, adding that if weak standards are implemented, industries can get away with simply diluting pollutants, and the river will continue to be polluted and remain devoid of oxygen.

“The idea is not that companies go to pollute somewhere else, but that they change the way they produce, starting with the largest ones, because that will generate the greatest impact,” said Pujó. She acknowledged that change cannot come overnight but predicted that, if the right work is undertaken now, progress will be visible in 25 years.

Even the CEO of ACUMAR, Oscar Deina, told IPS that the objectives of the plan are “under review”.

“Aiming for recreational use (of the river) was the first stage…but now we aspire to much more. It is true that in the watercourse we still fail to see chemical changes, but we took out piles of junk, lumber and garbage. We have rebuilt the river banks and slopes, and cleaned the image,” Deina added.

“The industrial issue is the most difficult for us because we have to achieve the reconversion,” he acknowledged. Deina said 1,700 of the more than 25,000 registered establishments were polluters, and that around 800 had almost finished works required to conform to the reconversion efforts, but more needed to be done.

“We’re talking to companies so they know that the requirements are a first step, but later, depending on the location of the company and the flow of the river, in each case we will determine how much they can pour in,” he explained.

According to Deina, there are records of ecosystems recovering in the basin’s upper section, but he admitted that sector is the least affected by pollution. “In the middle and lower basin complications are greater,” he said.

He also assured that uses of the river could be re-categorised and modified. He said parameters surrounding the permitted dumping of hazardous materials could be narrowed, adding that such a process requires a better understanding of the “flow and dynamics” of the river basin.

In May, a team of experts from universities located in the basin will study what to do with the sludge, which accounts for most of the pollution in the riverbed.

“There are four to six metres of sediment. Some say that we should not touch it so it does not interact with the water column, but others claim it can be taken out. We have to analyse it,” Deina said.