BUENOS AIRES, Feb 8 2013 (IPS) - Two corruption scandals – one homegrown and the other originating in Spain – are again highlighting the connections in Argentina between irregular investments, the misuse of environmental remediation projects for private gain, and plans that contribute to the degradation of natural resources. 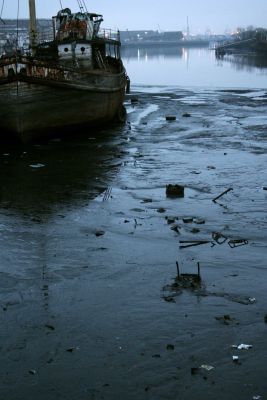 Pollution levels in the Matanza-Riachuelo basin have not dropped despite a Supreme Court ruling ordering its clean-up. Credit: Malena Bystrowicz /IPS

For the organisation Transparency International, climate change and forest and water management are areas that are particularly vulnerable to corruption, especially in developing countries where natural resources are plentiful and economic resources are scarce.

A Spanish court is currently investigating a case of corruption involving the former treasurer and head of Spain’s governing People’s Party (PP), Luis Bárcenas (1993-2009). That scandal has an Argentine chapter, closely linked to the destruction of native forests that should be protected.

One of the owners of La Moraleja, a 30,000-hectare plantation in the northwestern province of Salta, is the Spanish politician Ángel Sanchís, who served as PP treasurer from 1982 to 1987 and has been under investigation in his country due to his close ties to Bárcenas.

The Spanish courts informed in January that Bárcenas had at least one account with 29.8 million dollars in Switzerland, from which – according to leaks in the investigation – funds were diverted to a company connected with La Moraleja and it is suspected that they were invested in the agricultural establishment itself, although the Sanchís family has denied it.

Also last month, Miguel Ángel Soto, head of Greenpeace Spain‘s forest campaign, reported that in 2004 Sanchís offered “a compensation” in exchange for the environmental watchdog’s support for a non-native species planting project he was planning to implement in Salta.

According to Soto, Sanchís explained that his plantation in Argentina had only 12,000 productive hectares and that, therefore, he wanted to deforest the non-productive areas and replace the indigenous vegetation with “noble” wood species, such as cherry, teak and mahogany. But the organisation says the area he planned to replant is a high conservation value forest.

At the time, Greenpeace Argentina was conducting a strong campaign for the preservation of native forests in Salta, where the expansion of soybean and other cash crops was wiping out forests and threatening the survival of the area’s indigenous communities.

The organisation began its campaign by denouncing the auctioning off of the General Pizarro nature reserve, located near La Moraleja. Then Governor of Salta Juan Carlos Romero, who visited La Moraleja often, justified the sale with the argument that the reserve was already degraded.

Every law has a loophole

As a result of these anti-logging protests, in November 2007 a Minimum Standards for the Environmental Protection of Native Forests Act (Law 26,331 or Forest Act) was passed, stipulating that high, medium and low conservation areas had to be identified in every province. These would be categorised, respectively, as red, yellow and green zones under a land-use management scheme.

Hernán Giardini, head of the Greenpeace Argentina campaign, told IPS that La Moraleja is located in a transition zone between the Chaco forest to the east and the Yungas jungle to the west, and is home to species from both regions.

“There’s very little left of the transition forest in Salta and, just as (the Romero) provincial administration was nearing the end of its term and after the (forest) law had been passed, logging permits increased five-fold,” even in La Moraleja, which is in a red category zone, Giardini said.

According to the information obtained by Greenpeace, the owners of this agricultural establishment were granted permits to clear 5,900 hectares of forest in December 2007, just days after the law banning such activity was passed. That same year logging permits were issued for a total of 435,000 hectares in Salta.

“The information gathered indicates that the Forest Act had little impact in terms of reducing the rate of deforestation in Salta in the years immediately following the enactment of this law,” the report concludes. It also highlights that the most affected area is Salta’s Anta region, where La Moraleja is located, and which accounts for 40 percent of the province’s deforested territory.

Giardini told IPS that he was never able to confirm the rumours that accused Romero of issuing permits in exchange for money, but that he did find evidence that permit applications were hurried through when it was evident that the law would have the necessary votes.

Romero served as governor of Salta for three consecutive terms (1995-2007) and currently holds a seat in the national senate. He was elected under the governing Justicialista Party ticket but belongs to a right-wing faction that opposes President Cristina Fernández, who heads the central-left faction Frente para la Victoria.

A basin contaminated by justice

Another emblematic case of environmental degradation driven by corruption is the project to clean up the basin of a river that runs 64 kilometres from the northeast of the Buenos Aires province, where it is called Matanza, to the southern border of the Argentine capital, where its name changes to Riachuelo.

“Corruption must be considered an additional source of pollution of the Matanza-Riachuelo basin,” activist Andrés Nápoli, of the Environment and Natural Resource Foundation, told IPS.

In 2006, Argentina’s Supreme Court of Justice issued a ruling ordering a clean-up plan for this basin – the country’s most polluted waterway, which covers 2,240 sq km and includes 232 streams-, as well as the mitigation of environmental damage and the improvement of the quality of life of the people living along the banks of this river that flows into the Río de la Plata estuary.

A Matanza-Riachuelo Basin Authority (ACUMAR) was created to implement this plan, formed by representatives of the government of the city of Buenos Aires, 14 Buenos Aires province municipalities, and the federal government, which are the jurisdictions involved.

Environmental groups say that while many measures stipulated by the court ruling have not yet been implemented, the plan has achieved general improvements.

In late 2012, however, the newspaper Página/12 denounced acts of corruption allegedly committed by Luis Armella, the judge responsible for enforcing the court sentence.

The paper claimed that relatives of the judge created companies that were awarded contracts for clean-up works without going through bidding channels, with the excuse that the works needed to be completed urgently.

The court took Armella off the case and conferred jurisdiction on two other judges: Sergio Torres and Jorge Rodríguez. Following an independent investigation, the National Auditing Office confirmed the accusations, and the Council of the Judiciary is currently assessing whether Armella should be removed from the bench.

“It came as a shock to us and it was a great blow to the credibility achieved with the Court’s intervention. The basin is tainted by the stigma of pollution, apathy and corruption, and now Armella’s misconduct seems to confirm that fate,” Nápoli said.

Nápoli recalled, for example, that in the 1990s the Inter-American Development Bank (IADB) granted a 250-million-dollar loan to finance an earlier clean-up plan for the Riachuelo and that “the only thing (that money) was good for” was to increase Argentina’s public debt.

Greenpeace Argentina rubbed salt into the wound when it announced on Sunday, Feb. 3 that contamination levels in the Matanza-Riachuelo basin were exactly the same as five years ago and that the water’s toxicity was still very high.