BUENOS AIRES, Feb 8 2012 (IPS) - For the first time in over 200 years, visible progress is being made in cleaning up the Matanza-Riachuelo River basin, the most highly polluted in Argentina, although improvements remain largely superficial so far. 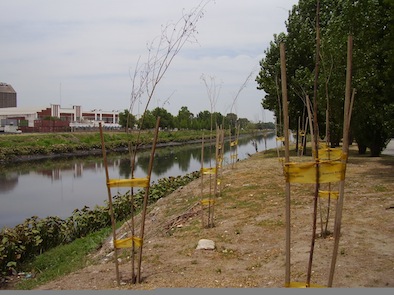 Results of the clean-up and reforestation of the towpath along the banks of the Riachuelo. Credit: Juan Moseinco/IPS

“There have been advances, with the caveat that we are moving very slowly and there are some things that are still not being done, but overall the situation is positive,” Alfredo Alberti, president of the La Boca Residents Association, told Tierramérica. The southeastern Buenos Aires neighbourhood of La Boca (“The Mouth” in Spanish) is so named because it is located where the Riachuelo river flows into the Río de la Plata estuary.

The Matanza-Riachuelo basin covers 2,240 sq km and includes 232 streams. Of the roughly five million people who live within this area, 35 percent have no access to drinking water and 55 percent lack sewers, according to the Environment and Natural Resources Foundation (FARN).

More than 12,000 businesses that operate along its banks, including tanneries, slaughterhouses and hydrocarbon, chemical and metallurgical plants, dump their wastewater into the river, polluting it with heavy metals like mercury, lead and chrome, among other toxins.

“Since late 2010, progress has been made in the clean-up of the river’s banks, the removal of sunken ships, and the relocation of people living along the most heavily polluted sections of the riverside,” activist Andrés Nápoli of FARN told IPS.

In fact, the tow paths along the river’s banks – 35-metre-wide strips on each side – have become visibly clearer, after being occupied for years by industries, slum housing and market stalls. In January, some 10,000 informal traders were evicted from the area.

The river’s banks are slowly being recovered and reconverted into public spaces. Around 30 of a total of 117 garbage dumps have been eliminated, trees have been planted, and a road is now being opened through an area that was impenetrable until recently.

But progress has been much slower in the identification and inspection of polluting industries, who have been slow to submit the conversion plans that each company is required to draw up, despite the fact that they have been offered easy financing for this purpose.

Of an estimated 12,000 polluting firms, 400 have submitted plans and 360 have been shut down for failing to do so, according to the executive president of the Matanza-Riachuelo Basin Authority (ACUMAR), Oscar Deina.

In a televised interview, Deina stressed that “we cannot trade health for employment,” referring to the dilemma faced until now by the authorities, who have been reluctant to shut down businesses because of the lost jobs that would result.

For his part, Nápoli stressed that little progress has been made in addressing the health problems of the people affected.

Official figures indicate that some 400,000 people need medical treatment as a result of living in the most severely polluted areas of the river basin, and they cannot wait until the clean-up efforts have been completed, he said.

FARN coordinates the Espacio Matanza-Riachuelo, a network of environmental groups and residents associations devoted to monitoring compliance with a clean-up plan ordered by Argentina’s Supreme Court in a historic ruling issued in July 2006.

In response to a suit filed by 114 residents of the river basin, the Court convened hearings with government officials, business owners and other stakeholders and then ordered the government to draw up a definitive clean-up plan for the area.

To help finance the cost of the clean-up – estimated at close to 1.5 billion dollars in 2009 – the World Bank granted Argentina a loan of 840 million dollars that same year, to be used for the construction of water supply and sewerage systems, water treatment plants and pumping stations, as well as industrial conversion, land planning and strengthening of the monitoring authority.

But work on the water and sanitation systems has yet to begin, and funding for other purposes has yet to be disbursed “because of bureaucratic issues,” reported Nápoli.

Environmentalists and local residents concur that the clean-up of the river, for which almost no one took responsibility a decade ago, progressed to some extent with the creation and consolidation of ACUMAR.

However, the greatest advances have been made thanks to the Supreme Court ruling, which established clear guidelines. The execution of the ruling was assigned to Federal Judge Luis Armella.

“He is a hardworking and thorough judge. Instead of handing out fines to those who don’t comply, he goes to the site, calls meetings and looks for solutions,” commented Alberti.

Nevertheless, “there have been improvements on the surface of the water, but the riverbed is just as polluted as ever,” he added.

Alberti also noted that the residents of the area have become “hostages to political disputes” between the different government authorities who have been brought together within ACUMAR but do not share the same party affiliations. This has resulted in delays in crucial work such as the construction of new housing.

Twenty percent of the 1,500 families who live on the banks of the Riachuelo have already been moved out of the area, reported Nápoli. Entire slum settlements have been relocated to new neighborhoods built in the Buenos Aires district of Lanús.

For its part, Greenpeace Argentina, which is also a member of the Espacio Matanza-Riachuelo network, does not share the generally positive view of the clean-up efforts expressed by others.

According to the environmental group, even if all of the factories complied with the rules on toxic waste dumping, the river would continue to be poisoned, because the limits established by the law are incompatible with the topography and characteristics of the Riachuelo.

Because it is a flat-lying river whose still waters make it more like a lake, it cannot withstand the same volumes of toxic wastewater as a faster-flowing river or one flowing down a mountain slope, explained Greenpeace activist Consuelo Bilbao.

As a result, the ultimate goal should be “zero wastewater” dumping. Greenpeace is working with ACUMAR for the adoption of progressive guidelines that become gradually less permissive.

For the time being, however, the goal is to at least ensure that the current legislation is obeyed.