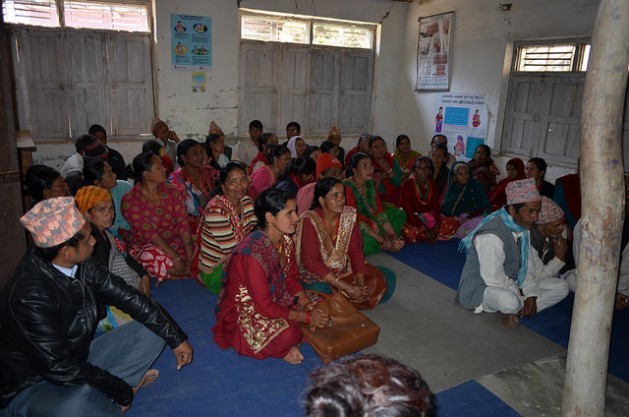 Juna Bhujel (looking at the camera) at the Mankha VDC office to complain about non-payment of disaster relief funds to reconstruct housing. She lost her home in Nepal’s April 2015 earthquake. Credit: Renu Kshetry/IPS

KATHMANDU, Feb 21 2017 (IPS) - Juna Bhujel of Sindupalchowk District, 85 kilometres northeast of Nepal’s capital Kathmandu, lost her daughter-in-law in the Apr. 25, 2015 earthquake. Fortunately, she managed to rescue her two-year-old grandson, who was trapped between her mother’s body and the rubble.

Soon after the devastating earthquake, her son, the family’s sole bread-winner, left for Malaysia to seek work, taking out a loan with high interest rates to fund his trip. He has neither returned, nor sent any money back home.

“Since 65 percent of the total income of Nepali people goes to food consumption, these programs should be linked with food security." --Janak Raj Joshi, former vice chairman of the Poverty Alleviation Fund

Bhujel, a member of the Mankha Village Development Committee (VDC), now lives in a makeshift dwelling with a family of five. Their only source of income is when her husband gets menial work in home construction. To make matters worse, she has not received any money from the government to build a house.

“I was already poor, with a small plot of land that produced enough food for only three months, and now I don’t even have a house,” said Bhujel, 55. “If my government does not support me, then who will?”

Bhujel is just one of tens of thousands of earthquake victims who lost their family members and homes, but are still waiting to be formally identified as “poor” by the government.

Nepal has set a target of reducing poverty to five percent by 2030, per the U.N.’s Sustainable Development Goals. In this central Himalayan country, 25.2 percent of the population now lives below the national poverty line.

The government is planning to distribute Poor Identity Cards to 395,000 families in 25 districts starting in April, providing social security entitlements and benefits with the aim of achieving the targets.

Hriday Ram Thani, Minister for Cooperatives and Poverty Alleviation, told IPS that with this new identity card, the government will be able to implement more concentrated programs. The ministry is planning to expand the distribution of identity cards to 50 more districts. Nepal has 75 districts.

But the government’s ambitious plans to alleviate poverty face the challenge of weak programming, planning and coordination between various line ministries to successfully implement the proposed programs.

Nepal already has 44 programs to alleviate poverty run by various ministries. For example, the Poverty Alleviation Constituency Development Program run by the Ministry of Federal Affairs and Local Development has a budget of Rs one billion (9.29 million dollars), and the 9,290,000.00 USD 9,290,000.00 USDPoverty Alleviation Fund under the Prime Minister’s office has a Rs 3.82 billion (2.6 million) budget for this year.

The Youth Employment Fund under the Finance Ministry has Rs 90 million (836,100 dollars), and the Poor with Bishweswor program under the Ministry of Local Development has Rs 160 million (1.486 million) for this year with the mandate to run programs in 483 VDCs in 75 districts.

Minister Thani said that in order to achieve the target and make it more results-oriented, he has already asked Prime Minister Pushpa Kamal Dahal to integrate all these poverty-related projects so that the outcome can be measured — or else to close down the ministry.

“Apart from results documented in reports from any of these ministries, the impact cannot be observed in any of their target areas,” he said.

He added that there is a need to establish a high-level poverty alleviation board under the chairmanship of the prime minister and the Poverty Alleviation Ministry should be the focal ministry that links all the projects under various ministries. “There is a need for an internal expert team within the ministry with 3-5 subject group experts,” he said.

Apart from these initiatives, about two to three percent of the government budget is spent on nine categories of Social Security Entitlements each year for 8 percent of the total population.

Janak Raj Joshi, former vice chairman of the Poverty Alleviation Fund, said that it is sad that the government’s programs have been expanding but failed to go deeper and lack sustainability. He also blamed various international organisations for launching time-bound poverty alleviation projects.

“Since 65 percent of the total income of Nepali people goes to food consumption, these programs should be linked with food security,” he said. “The government lacks a vision of proper distribution of resources and the programs have failed to address the core issues. Each program should directly link to the people living under the poverty line.”

Around two-thirds of Nepalis rely on agriculture for their livelihood, according to the U.N. Food and Agriculture Organisation (FAO). The National Planning Commission (NPC) aims to introduce various programs to help improve the overall development of agriculture from this year.

Mahesh Kharel, Under-Secretary of the NPC’s Poverty Alleviation Division, said that they have planned an Agriculture Development Strategy from this year. He said that under the prime minister’s chairmanship, the project will focus on agriculture, infrastructure, local development and agricultural roads, livestock and irrigation to promote marketing of agricultural goods.

Kharel agreed that poverty alleviation needs an integrated approach with some focused programs that directly affect the poor and bring positive changes to their lives. “By making improvements in the agriculture sector, we can help improve the living standards of people living under the poverty line,” he said.