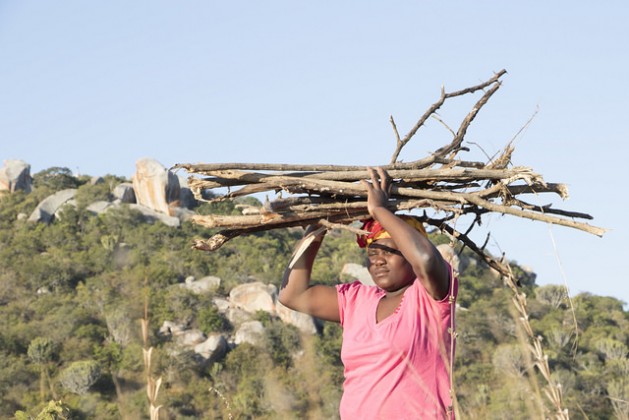 Constance Huku, 29, of the rural town of Masvingo in southeastern Zimbabwe, carries a pile of wood on her head. Credit: Sally Nyakanyanga/IPS

HARARE, Mar 7 2017 (IPS) - As the cock crows, Tambudzai Zimbudzana, 32, is suddenly awakened from sleep. She quickly folds her blankets and strides outside her three-room, sheet iron-roofed house in rural Masvingo.

Picking up a few logs of firewood from a huge pile, Zimbudzana sets a fire to boil water and prepare food for her husband to bathe and eat before cycling to work.

“Men should take the lead to lessen the care burden of women as this has a positive effect on the whole household, community and country at large.” --Kelvin Hazangwi

“My day begins at 4 am, cooking, setting a fire, fetching water and spending the rest of the day in the field or garden depending on the season. My day often ends at ten in the evening as I have to ensure all household work is done, including attending to the demands of my six children, before I put my body to rest,” Zimbudzana told IPS.

She said she rarely attends community activities because of time and work that demands her presence.

Many women and girls carry the heavy, unequal and seemingly natural burden of care work, which is rarely appreciated, not financially beneficial and deeply rooted in culture.

Since 2014, Oxfam in Zimbabwe has been working to strengthen women’s economic rights by building data on unpaid care, innovate on interventions and influence policy and practice to address care as part of women’s empowerment.

Oxfam has carried out programmes in three districts since 2014 and developed two tools to assess unpaid household work and care of people in the communities: The Rapid Care Analysis and Household Care Survey.

“The key aim is to reduce the time or labour required for daily housework and caring for people, and thus increase women’s participation, empowerment, leadership and representation in both the public and private spheres,” Giolitto told IPS.

Results of the survey showed that women do 3–6 times more hours of care work than men. 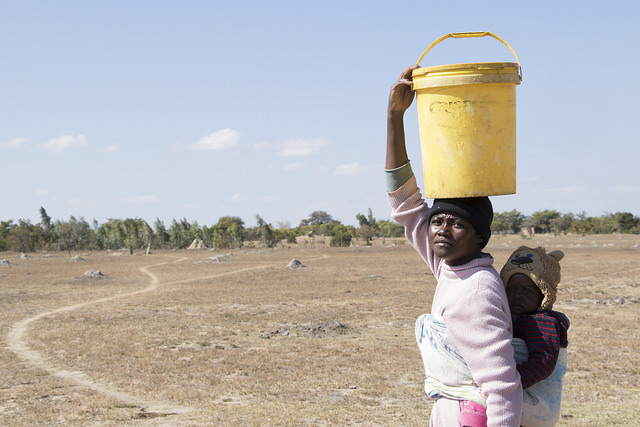 Charity Ncube, 30, of the rural town of Masvingo in southeastern Zimbabwe, carries her child and a 20-litre container of water. Credit: Sally Nyakanyanga/IPS

On Mar. 8, countries around the world will come together to commemorate International Women’s Day, under the theme “Women in the Changing World of Work”.

According to UN Women, the world of work is evolving, with significant implications for women. There is globalization, technological and digital revolutions and opportunities for women.

However, the growing informality of labour, unstable livelihoods and incomes, new fiscal and trade policies, and environmental impacts have a negative effect on the well-being of many women in Zimbabwe and the world. As such, they must be addressed in the context of women’s economic empowerment.

Women in the informal economy in Zimbabwe grapple with a hostile economic environment, security and customs officials on a daily basis.

Lorraine Sibanda, President of the Zimbabwe Chamber of Informal Economy Associations (ZCIEA), says, “Our goods are confiscated at border posts due to the limited amount of goods one is allowed to bring into the country. We end up paying more money to transporters in order to get reasonable stock across the border.”

Sibanda added that the transporters’ charges are not consistent and one may pay several times for the same goods.  Further, they have to carry heavy loads of goods over a long period of time, which can have health implications for these women involved with cross-border trading.

“Little or lack of knowledge of customs and exercise procedures such as declaration of goods also contributes traders falling prey to predatory transporters, immigration personnel and other elements who prowl the border post for a living,” Sibanda told IPS.

The Zimbabwe National Statistics Office (ZimStats) has noted that 84 percent of the country’s working class are in the informal sector, with 11 percent in formal employment. Further, ZCIEA told IPS that 65 percent of its members are women.

Though Oxfam does not work with women cross-border traders in Zimbabwe, it has used the “four R’s” approach for change.

“Women will be able to do more when there are men sharing the responsibility at home as well as playing a key role in decisions at their households,” Giolitto said.

“Men should take the lead to lessen the care burden of women as this has a positive effect on the whole household, community and country at large,” says Hazangwi.

Padare is a men’s forum advocating for gender equality in Zimbabwe.