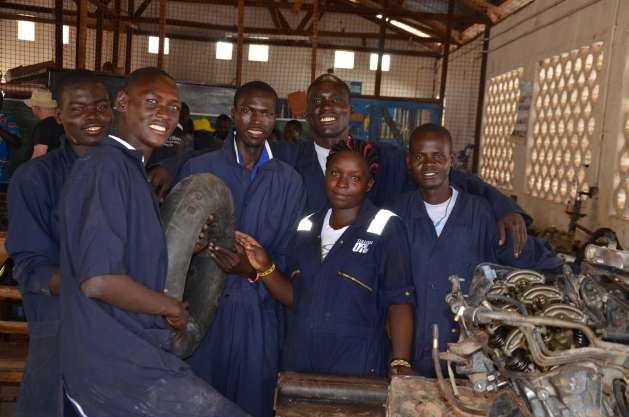 A lady mechanic student poses with male classmates during a practical session at the Lodwar Vocational Training Centre in Turkana County, Kenya. With empowerment, more women are making the decision to take up jobs and careers previously believed to be preserves of men. Photo courtesy of UN RCO Kenya.

NAIROBI, Mar 7 2017 (IPS) - This year as the world commemorates International Women’s Day it is a time for all of us to celebrate and reflect on the progress made on Women’s rights globally. But more importantly, a day to call for an end to gender inequality in all its forms especially in the work spaces. Appropriately themed “Women in the Changing World of Work: Planet 50-50 by 2030” the commemoration comes against a backdrop of a world that is undergoing major changes with significant implications for women.

Africa has more women in executive committees, CEO, and board roles than the average worldwide. Yet women are still under-represented at every level of the corporate ladder – non-management and middle and senior management – and fall in number the higher they climb.
On the one hand, we have globalization and the rapid technological and digital revolution and the opportunities they bring. On the other hand, are the growing informality of labor, the growth of corporate influence, unstable livelihoods and incomes, new fiscal and trade policies and environmental impacts—all of which have an impact on women’s economic options and their interaction with the world of work. But within this dynamic environment we must do everything possible to provide decent work for all women, ensure that women are treated fairly in law, ensure equal pay for women, teach everyone that any job is a women’s job and organize the women to ask for their rights.

In addition to governments, Step It Up also works with key stakeholders to commit to Step It Up for gender equality and the empowerment of women. With the support of the partners, the initiative focuses on gender equality and women’s rights issues on two fronts – in their reporting, disrupting stereotypes and biases; and in increasing the number of women in the media, including in leadership and decision-making functions.

By 2030 we want to see a world where women in the workplace receive equal pay for equal work relative to their male counterparts and are not hampered in pursuing their economic option by unpaid care and domestic work. 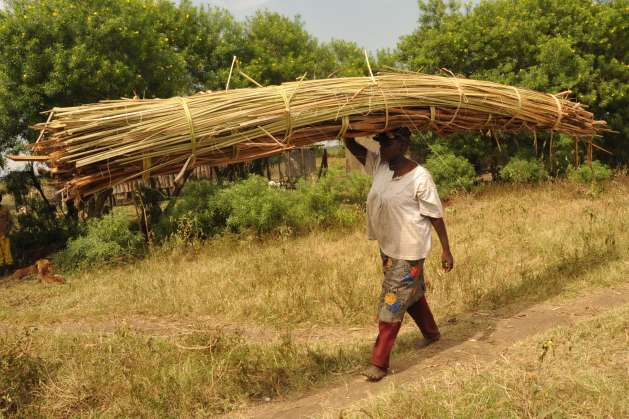 A woman transporting a stack of reeds in rural Kenya. Women’s unpaid care and domestic work is yet to be recognized as labour in many parts of the developing world. Photo courtesy of UNDP Kenya.

Measures that are key to ensuring women’s economic empowerment in the changing world of work must include bridging the gender pay gap, which stands at 24% globally; recognizing women’s unpaid care and domestic work and addressing the disproportionate burden of care work on women; as well as addressing the low representation of women in leadership, entrepreneurship; access to social protection; and ensuring gender-responsive economic policies for job creation, poverty reduction and sustainable, inclusive growth.

Additionally, policies must cater for the overwhelming majority of women in the informal economy by providing them with job safety and protection from harm. We must also promote women’s access to innovative technologies and practices, decent work and climate-resilient jobs as well as protect them from violence in the work place.

Kenya’s women and youth make a significant economic contribution, mainly in agriculture and informal business sector. Women make up nearly half of all micro and small enterprises. The recent affirmative action procurement legislation for women, youth and persons living with disabilities has created excellent opportunities for women to participate in the public procurement market.

Interestingly, in the private sector, Africa has more women in executive committees, CEO, and board roles than the average worldwide. Yet women are still under-represented at every level of the corporate ladder – non-management and middle and senior management – and fall in number the higher they climb. Only 5%of women make it to the top as reported by Africa Women Matter McKinsey Report 2016.

Actions including creating programmes to eradicate violence against women and girls, encouraging women’s participation in decision-making, investing in national action plans or policies for gender equality, creating public education campaigns to promote gender equality, and many more are essential. Empowering women and girls is central to achieving the Sustainable Development Goals. Everyone has a role to play by making gender equality a lived reality by 2030.