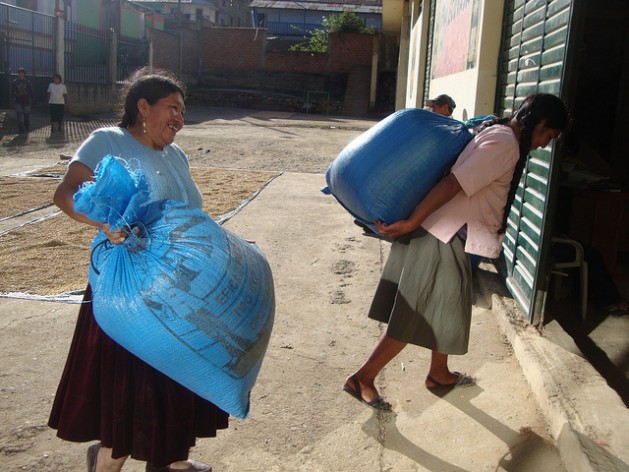 The theme of the 2017 UN Commission on the Status of Women will be economic empowerment. Credit: Milagros Salazar/IPS

UNITED NATIONS, Mar 2 2017 (IPS) - Human rights groups have expressed concern for the future of global negotiations on women’s rights in a climate of restrictive policies ahead of an upcoming annual UN meeting on the status of women.

While discussing the 61st Commission on the Status of Women (CSW), organisations highlighted the importance of intersectionality in the discussion of women’s rights and implementation of relevant social and economic policies, referring to the importance of considering the many different ways that women can be marginalised.

“You need to look at issues of education, issues of mobility, issues of violence in the workplace, issues of sexual and reproductive rights of women…as a precursor to employment,” said President of the International Women’s Health Coalition (IWHC) Françoise Girard.

Negotiations have begun to create an outcome document for the CSW, whose main theme for 2017 is women’s economic empowerment.

“We feel very strongly that you cannot talk about women in a world of work globally without looking at the other factors that keep women from decent work,” Girard told IPS.

However, the initial draft failed to address these issues adequately with no mention of girls’ access to education or young women’s access to reproductive health care, she said.

“If women don’t have access to education or ethnic minorities are discriminated in the school system…or [lack] the ability to control their fertility and reproductive health…that will have a huge impact on their ability to be in paid work,” Girard told IPS.

“If we don’t address [climate change], then we don’t have a planet on which to live where women can exercise their full rights,” she said during a press conference.

Girard and Blomstrom also expressed alarm at the implementation of policies that further restrict women’s rights and thus economic empowerment.

The global gag rule, reinstated by the Trump administration, forbids non-governmental organisations receiving U.S. global health funding from working on issues around abortion regardless of other sources of funding. It also blocks recipients from participating in any national discussions on abortion.

Under the Bush administration, the policy only applied to family planning funds. This is the first time the condition has been applied to all global health assistance which makes up USD 9.5 billion, including funding for HIV and maternal health.

Girard cited the example of Kenyan organisation Kisumu Medical and Education Trust (KMET) which receives approximately USD 200,000 to provide a range of reproductive health services including the treatment of postpartum haemorrhage. However, they are now left in a precarious position of whether or not to limit their services.

“Now they are having to choose—they cannot provide comprehensive health care anymore if they accept U.S. government funding, but they don’t want to stop training providers for postpartum haemorrhage,” said Girard.

Girard and Blomstrom noted that including such intersections of women’s issues in the CSW outcome document will help pave the way for governments to implement longer-term, detailed plans that allow for positive development opportunities and outcomes for women.

And there has been some progress, they added, with governments contributing to a new draft that views women’s participation in the world of work in a more holistic manner.

The new draft has thus far pulled language from the Paris Climate Change Agreement to address the intersections between women’s economic empowerment and environmental and climate change concerns, and highlighted the “crucial” need for men and boys to share household work and work towards a fair division of labor.

“I am pleasantly surprised at this early stage that there is real recognition (of these issues),” Girard said.

She also noted the important mobilisation around the world for and after the Women’s March on Washington which saw millions of protestors gather for women’s rights.

The organisers of the Women’s March have planned a women’s strike on March 8, which also falls on International Women’s Day.

“In the same spirit of love and liberation that inspired the Women’s March, we join together in making March 8th A Day Without a Woman, recognising the enormous value that women of all backgrounds add to our socio-economic system—while receiving lower wages and experiencing greater inequities, vulnerability to discrimination, sexual harassment, and job insecurity,” the organisers state.

And in that same spirit and despite the potential disagreements that are expected to occur as CSW negotiations proceed, “nevertheless, we persist,” said Girard and Blomstrom.

The term is a play on words after U.S. Republican Senator Mitch McConnell, said ““She was warned. She was given an explanation. Nevertheless, she persisted.” in reference to U.S. Democrat Senator Elizabeth Warren, after Warren was told to stop reading out loud a letter by Coretta Scott King – the wife of Martin Luther King Jr. – earlier this month.csw

Governments and civil society from around the world will be convening for CSW at the UN Headquarters in NY from 13 to 24 March to discuss and implement plans to promote women’s rights.