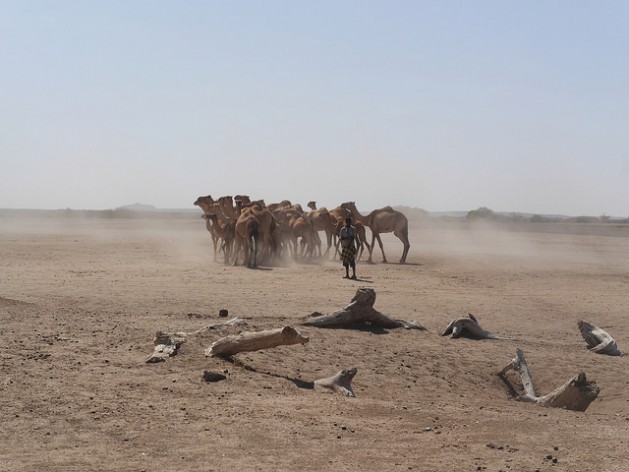 A project to help Ethiopian farmers adapt to drought and climate change was rejected for funding from the Green Climate Fund. Credit: William Lloyd-George/IPS

UNITED NATIONS, Apr 14 2017 (IPS) - Climate change is making poor countries poorer, yet funding meant to address its economic consequences has been slow to materialise. Instead funding bodies are choosing to invest in green energy projects in middle-income countries.

Only two of the other eight projects worth 755 million USD approved at the meeting were in least developed countries:

“The 48 least developed countries, their capacity to cope with climate change is much lower than other developing countries,” Raju Pandit Chhetri, who was at the meeting, told IPS by phone.

The GCF board argued that the proposed project was too focused on addressing poverty and not enough on the impacts of climate change. Yet Chhetri, who is Director of the Prakriti Resources Centre in Nepal, says that separating poverty from climate change isn’t so straightforward.

“To reject an adaptation project for a poor and vulnerable community it is quite astonishing for me,” said Chhetri.

Climate change, he says, is “an addition to the problems” that poor communities already have. Already scarce food and water will become scarcer. Limited job options in farming and tourism will dry up.

“To reject an adaptation project for a poor and vulnerable community it is quite astonishing for me,” -- Raju Pandit Chhetri.

The related nature of the problems, says Chhetri means that it’s difficult to separate out solutions that address only climate change or only poverty.

A lack of clarity from the GCF around what types of adaptation projects it will actually fund is also causing confusion says Chhetri who says that should also be some room for experimentation in this new area.

Yet adaption projects are also finding it difficult to access funds for other reasons.

Funding bodies tend to prefer investing green energy projects such as wind or solar, or even controversial mega hydro, which are more likely to offer a return of investment and can help reduce carbon emissions.

Back in 2009, governments committed to provide 100 billion USD in climate change financing per year for developing countries by the year 2020.

While money has begun flowing, a lot of it seems to end up in the same places, says Clare Shakya, Director of the Climate Change Group at the International Institute for Environment and Development (IIED).

Big donors such as the World Bank are “all chasing after the same types of investments, … doing the same sorts of things, in the same geographies”, says Shakya. This means that “vast populations” are missing out on funds.

The preference for reducing emissions is another reason why LDCs like Nepal are missing out. Nepal’s energy use is so low that its emissions are only around 0.0027 percent of global emissions, says Chhetri, which is why, he says, Nepal is more interested in accessing funds to help adapt to climate change impacts like increasingly unreliable rains.

“Eighty percent of the people in the country rely on agriculture which means that we rely on rainwater,” says Chhetri.

In fact, energy use in the world’s poorest communities is so low that increasing their access, whether through green or non-green energy, could also help them to adapt to climate change, says Shakya.

“There’s all sorts of things that happen when you have access to energy that you don’t have without so it’s a vital part of resilience,” she said.

Jessica Brown, Associate Director at the Climate Policy Initiative told IPS that there is “still a lot of momentum” from developed countries to “make good on the 2020 commitment” even with indications of a change in US policies towards climate change under the current administration.

But Brown also noted that “the $100 billion goal is certainly not enough to both meet the needs on climate mitigation and adaptation.”

“On the renewable energy and energy efficiency side alone, there’s estimates that are in the trillions for what’s needed for the Nationally Determined Contributions and also the commitment to keep temperature increase below 2 degrees,” she said.

Put another way by Shakya: “If you just take the Nationally Determined Contributions of the LDCS on climate financing they themselves need (almost a) $100 billion.”

Yet Brown also noted that “the overall economics on climate are moving in the right direction,” with technology costs falling and increasing private investment, making investments in green energy more popular.