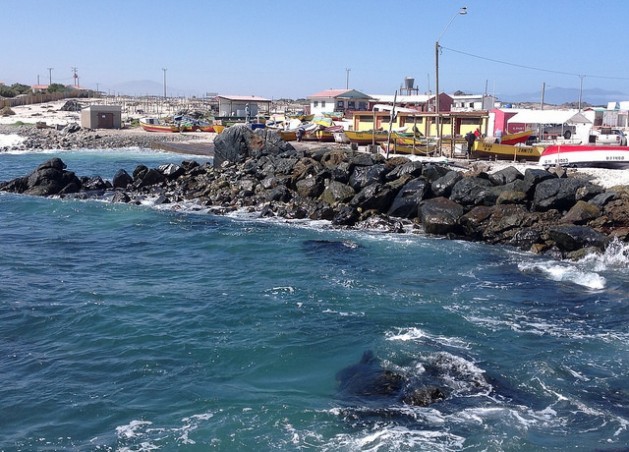 Punta de Choros, a picturesque cove in northern Chile, has become a major tourist draw, and the number of restaurants, lodgings and whale-watching boat tours has climbed. Credit: Orlando Milesi/IPS

LA HIGUERA, Chile, Apr 11 2017 (IPS) - In Punta de Choros, a hidden cove on Chile’s Pacific coast, some 900 fishers do not yet dare celebrate the decision by regional authorities to deny the Dominga port mining project a permit due to environmental reasons.

The fishers, from the northern region of Coquimbo, are afraid that the government will unblock the project, in which the Chilean company Andes Iron planned to invest 2.5 billion dollars for the extraction of iron ore, promising 9,800 jobs in the building phase and 1,400 in the production phase.

The project would affect several nature reserves, and the local fishers also question the effects from the traffic of cargo ships and from a desalination plant.

“More than a political problem, what we have here is a problem with the environmental assessment. There were a series of irregularities and that means that the impacts on one of the world’s 36 top biodiversity hotspots cannot be assessed.” -- Liesbeth Van der Meer

And as they said in interviews with IPS, they also doubt that the cabinet of ministers will uphold the decision by the regional environmental authorities, who rejected the plan for the Dominga mine, controlled by the Délano family.

Andes Iron will file an appeal this month to the cabinet – which will reach the final decision – asserting the positive aspects of the project, which is to extract 12 million tons a year of iron concentrate and other 150,000 tons of copper concentrate.

The 10,000-hectare project would involve an open-pit mine with a useful life of 26.5 years, a plant and a tailing disposal facility. It would also require a port to export the minerals to China, Japan and other markets.

“It is an area rich in benthic resources (bottom dwellers) and in algae and microorganisms. We want the mining project to be redesigned. Development is needed, especially in a poor area like this, but it has to be well done,” geographer and park ranger Paulina Correa, head of the Humboldt Penguin National Reserve, told IPS.

“We have low-impact tourism here. Many people make a living from this and protect it. We want development that protects the environment,” said Correa, lamenting that the mining project has divided the community between those who make a living from fishing and tourism, and those who live in the foothills of the Andes mountains.

Punta Choros has an official permanent population of 238, but that figure is multiplied by ten during tourist season, with the influx of workers employed by a dozen restaurants and lodgings that cater to the tourists drawn by the spectacular beaches, whale watching and traditional seafood cuisine.

The project was initially approved by the Coquimbo regional environmental authority, which stated that the mine complied with “the applicable environmental regulations,” and that the company “had corrected any errors, omissions and inaccuracies.”

Oscar Rebolledo, deputy director of the Coquimbo environmental authority, said “the measures proposed (by the company) take responsibility for the effects and circumstances” that may result from the mining project. 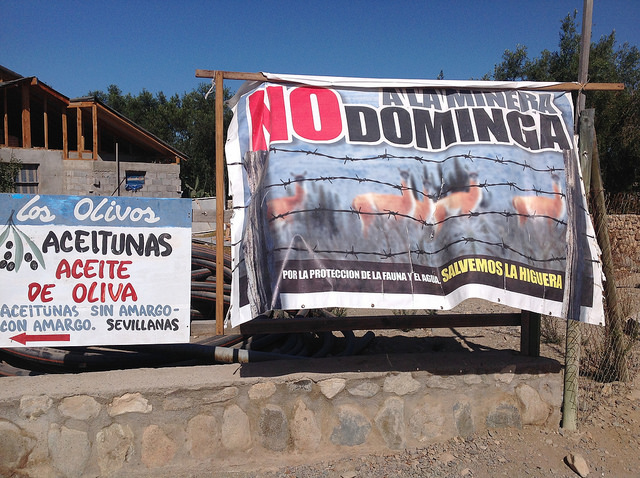 Signs against the Dominga iron mine are seen all over Punta de Choros, where fishers point to the growing catches, nature reserves crucial to the planet’s biodiversity, and the presence of large marine mammals, to argue against the extractive project in this village in northern Chile. Credit: Orlando Milesi/IPS

But Coquimbo Governor Claudio Ibáñez disagreed, and on Mar. 9 cast the vote that broke the tie between six regional secretariats, rejecting the project.

He said he was aware that Dominga represents “an important possibility for economic and social development,” but added that he is just as aware that “we are putting at risk one of the world’s most important nature reserves and the habitat of dozens of species.”

Local fisherman and diver Josué Ramos, a member of the Los Choros fishing association, began making a living harvesting surf clams (Mesodesma donacium) in 1996. He told IPS that in 2000 the clam became locally extinct, and two years later a restocking programme started to be implemented.

World biodiversity hotspot
The area where the open-pit mining project is to be developed includes the Humboldt Penguin National Reserve, created in the year 1990 to protect this species (Spheniscus humboldti), which is listed as vulnerable. The reserve is home to 80 per cent of the species’ entire population.

The area is also home to other endangered species: the Peruvian diving petrel (Pelecanoides garnotii), a seabird that can dive 80 metres deep, and mammals such as the South American sea lion (Otaria flavescens) and the rare marine otter (Lontra felina). The reserve includes three islands where several species of threatened endemic flora grow, which are under protection due to the fragility of the ecosystem.

“The year 2015 was the first year they started harvesting while simultaneously studying and monitoring the biomass. We extracted 670 tons and from a management area controlled by local people 95 tons were harvested. In 2016, the number increased to 832 tons in the main area and my trade association extracted 156 tons,” said Ramos.

“With the awareness that has been generated, we have obtained better results in the management areas, the seabeds to which the state gave us exclusive access to use and protect. Along 30 km of coastline, there are six management areas, which represent 70 per cent of the production of benthic resources in the region,” he said.

Ramos is opposed to Dominga because “they overexploit, export and then the prices rule. To obtain a ton of iron ore, which currently fetches 52 dollars, they leave 100 tons of tailings with chemical compounds. We harvest a ton of clams for 1.5 million dollars, and we only lift the sand, we don’t change it in any way.”

The local fisherman has “no expectation” that the cabinet will uphold the local environmental authority’s rejection of Dominga and believes that “the cursed progress” is going to prevail.

“Two ministers that vote have already resigned,” he added, in reference to the recent resignations of the ministers of transport, Andrés Gomez Lobos, and the environment, Pablo Badenier.

On Mar. 30, representatives of Andes Iron met with a dozen shepherds in the Casa Dominga, in the municipality of La Higuera. Although the meeting was closed, IPS saw the minutes.

“We are going to fight with everything we have. There is injustice here and we are not going to give in,” a representative of the company told the shepherds, who are in favour of the mine, and who took turns reporting on their interviews with local radio stations to discuss the positive aspects of the project.

At the end of the meeting, Omar Alfaro, with the La Higuera association of shepherds, told IPS that thanks to a framework agreement, “the Dominga project would improve the productive sectors, and when the mine closed down, we would be left with greater development in activities like agriculture, shepherding and fishing.”

Alfaro took part in a community meeting where the framework agreement was signed, which commits the company to pay “a minimum of 1.3 billion and a maximum of 2.6 billion pesos (between two and four million dollars) a year for projects, once the mine starts producing,” he said.

The agreement includes “the genetic improvement of livestock and the possibility of reforesting and recovering the native forest, deteriorated by prolonged droughts,” he said.

About the water the mine will use, Alfaro said that “a hydrogeologist explained the situation to us” stating that Dominga “is going to re-inject water into the same river basin.”

“We are hopeful that our institutions will be respected. I believe the project is important for the country, and the cabinet has a huge opportunity to revert and organise the technical instruments that have been used by the environmental institutions,” Iván Garrido, general manager of the Dominga project, told the online newspaper Pulso.

He urged the cabinet “to assess the report” by the Coquimbo environmental authority, which was favourable to the company.

Liesbeth Van der Meer, executive director of the non-governmental organisation Océana Chile, believes that the project will be rejected in the end.

“More than a political problem, what we have here is a problem with the environmental assessment. There were a series of irregularities and that means that the impacts on one of the world’s 36 top biodiversity hotspots cannot be assessed,” she told IPS.

If Dominga is approved, it will amount to “a crime against our natural heritage,” she said.

Van der Meer said he hoped “that not all development in Chile will be extractivist,” and called for respect for fishers and tourist operators in Punta de Choros, where the number of visitors soared from 900 in 1998 to 50,000 in 2016.

Mining is crucial to the Chilean economy and attracts more than one-third of all foreign investment, in a country that is the leading world producer of copper and other minerals, such as rhenium, lithium and iodine, as well as an important producer of several other minerals.