Alicia Bárcena is Executive Secretary of the Economic Commission for Latin America and the Caribbean (ECLAC). 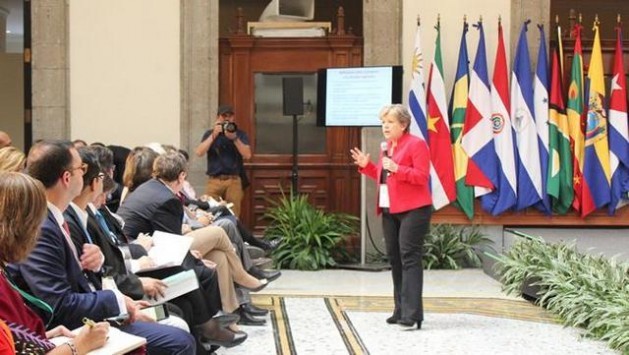 Alicia Bárcena in the Forum of the Countries of Latin America and the Caribbean on Sustainable Development, in Mexico City. Credit: ECLAC

MEXICO CITY, Apr 28 2017 (IPS) - The end of last year and the start of the current one were marked by major changes and enormous uncertainties, although there were also some notable advances and great opportunities, both at the global level and for Latin America and the Caribbean.

The 2030 Agenda for Sustainable Development and its 17 Sustainable Development Goals (SDGs), adopted in September 2015 by the United Nations General Assembly, offer an important road map for the construction of a new and ambitious international consensus regarding the need for greater cooperation to correct asymmetries and set the foundations for an open, sustainable and stable multilateral system.

The civilizing, universal and indivisible 2030 Agenda places human dignity and equality at its centre and, consequently, demands the broadest participation by all actors, including States, civil society and the private sector.

The current context, characterized by a weakening of multilateralism, the return of protectionism and the rise of extremist political movements, undermines the advancement of that global consensus, poses a grave challenge to the world economy and threatens the attainment of the 17 Sustainable Development Goals.

The current context, characterized by a weakening of multilateralism, the return of protectionism and the rise of extremist political movements, undermines the advancement of that global consensus, poses a grave challenge to the world economy and threatens the attainment of the 17 Sustainable Development Goals.
In our region, we face a complex scenario of lower economic growth, with notable steps forward such as the peace process in Colombia, and also great uncertainties in the political and economic future of the region, in a year of key elections and electoral preparations.

The unfavourable economic climate and low levels of investment impacting productivity and restricting the structural change necessary to progress towards a new development model threaten the social achievements attained by our region’s countries in recent decades, in particular the reduction of poverty and inequality. That is a cause for concern since, even today, poverty still affects 175 million people in Latin America and the Caribbean, 75 million of whom face the day-to-day challenges of extreme poverty.

For that reason, it is a matter of urgency for the civilizing agenda for equality offered by the 2030 Agenda to acquire an identity and a home in Latin America and the Caribbean. For us to give it a Latin American and Caribbean face and institutions, in accordance with our history and our circumstances and with our rich diversity and shared hopes, and to shape it according to the urgent demands that our reality imposes.

ECLAC has stressed that social issues cannot be addressed in the social arena alone, and that macroeconomic management and industrial policies, innovation and technology are crucial in resolving social problems. Neither can productivity and structural change be addressed solely in the economic arena. The fact of the matter is that social investment increases productivity and generates positive externalities throughout the system, whereas its absence raises costs and leads to lost income.

As regards the environment, the region’s countries must gear their efforts towards increasing investment and strengthening technological capacities in the developing countries, in order to decouple rising gross domestic products from increased emissions of greenhouse gases and other pollutants through a big environmental push.

In this context, understanding the urgency of the challenges they face in the present circumstances and the need to bolster the region’s voice in global sustainable development forums, the countries of our region created the Forum of the Countries of Latin America and the Caribbean on Sustainable Development which seeks, through exchanges of experiences, good practices and shared learning, to encourage peer-to-peer collaboration and to bring about a comprehensive, coherent and more efficient implementation of the 2030 Agenda.

The Forum, which held its first meeting in Mexico City on 26 to 28 April, is an annual mechanism that will launch a new methodology for multi-actor engagement, and its results will be used for the region’s submissions to the High-level Political Forum that meets in New York every July.

It provides a space for the region’s countries to reflect on what their medium- and long-term development strategies and priorities will be, and it also strengthens regional integration as an essential tool for meeting the challenges of the global context.

Today more than ever, we must promote and expand cooperation and integration on a multilateral basis. The 2030 Agenda and the SDGs are universal not only in that they aspire to include all the world’s countries and that their attainment only makes sense at the planetary level. They are also universal in that national efforts can be bolstered by the presence of global and regional cooperation or severely compromised by its absence.