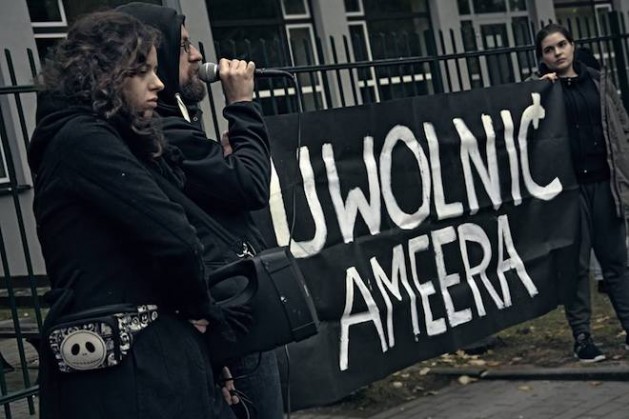 WARSAW, Apr 8 2017 (IPS) - Ameer Alkhawlany moved to Poland in September 2014 to pursue a Master’s in biology at the Jagiellonian University in Krakow, Poland’s second largest city. Two years later, the Polish state awarded him a scholarship to complete a PhD in the same faculty.

Pawel Koteja, his professor at the institute, told Polish media that Alkhawlany was “very committed to his scientific research, to which he dedicated a lot of time and effort, and was determined to pursue an academic career.”

Law and Justice, the party governing Poland since 2015, has a nationalistic and ultra-Catholic discourse, presenting itself as a defender of embattled Poles against its various 'enemies': the European Union, globalisation, Islam.

According to activists in contact with Alkhawlany, the student had an uneventful life in Poland until last summer, when he was allegedly approached by Poland’s secret services (ABW) with the offer to inform on Muslims residing in Poland. He would have to report back from mosques and actively seek out contact with specific people.

Alkhawlany refused. He said he was an atheist so he didn’t attend religious services and that some of the people he was asked to contact were from non-Arabic speaking countries so he might not have a common language with them.
In July, when the man was allegedly approached by ABW, Krakow was hosting the annual Catholic ‘World Youth Day’, attended by the Pope and an estimated three million people. Polish authorities were tightening security.

On October 3, the student was suddenly arrested in the center of Krakow by officials from the Polish Border Guard. He was given no reason for his apprehension. Hours later, during which time he was not allowed to contact a lawyer, a court sentenced Alkhawlany to 90 days of detention followed by deportation to Iraq.

In a letter written from detention by Alkhawlany and published in March by website Political Critique, the man said the court justified its ruling by the fact that the Polish secret services considered him a security threat. Despite the man’s questions, the judge did not offer any explanations as to why he was considered a threat.

“I have been living and studying in Poland since 2014. I have never broken the law ever,” Alkhawlany said to the court, according to his published letter. “I never crossed at the wrong light, never been in the bus without ticket! I did my master’s degree and I started my doctoral studies without any problem. I don’t want to leave Poland!”

At the time of his deportation, Alkhawlany had been detained for six months without break in the detention center for foreigners in Przemysl, in the southeast of Poland.

Polish authorities never explained publicly the reasons why the man was considered a security threat. However, anonymous sources quoted by Polish media claimed the secret services had information that Alkhawlany had been in touch with ‘radicals’ from abroad monitored by other countries’ services.

“The provisions of Polish national law do not provide solutions for a foreigner to defend themselves when the decision of return has been issued on the basis of undisclosed circumstances,” commented Jacek Bialas, a lawyer with the Helsinski Foundation for Human Rights. “This raises doubts as to compatibility with the Polish Constitution, the EU Charter of Fundamental Rights and the European Convention on Human Rights.”

“It’s as if a controller gave a citation to someone waiting at the bus stop, being sure the person would go on the bus without a ticket,” Alkhawlany commented in a February interview with Wirtualna Polska.

At the time of his arrest, Alkhawlany had just renewed his residence permit in Poland, which was valid until January this year. During his detention, he applied for asylum in Poland arguing that it was unsafe for him to return to Iraq, where the Iraqi military is battling ISIS in the north. He was denied asylum (the final decision following an appeal came April 4) because of confidential information provided by the security services which indicated he was a security threat.

Yet on April 5, after reviewing the same evidence provided by the secret services, the regional court in Przemysl ruled that Alkhawlany should be released from detention as he had been residing legally in Poland and there had been no solid reason for his arrest. The ministry in charge of the secret services retorted that the court ruling ‘did not undermine’ the evidence presented by ABW.

To the surprise of his lawyer and those engaged in a campaign to get him released, Alkhawlany was not released from detention but instead deported on the evening of April 5. Neither his lawyer nor his brother also residing in Poland were informed about the deportation decision.

Alkhawlany himself called from Iraq upon arrival to inform he had been transported to Erbil, in Iraqi Kurdistan.

Speaking to Polish media April 6, Marek Ślik, the student’s lawyer, said “The deportation is illegal because I have not yet received any notification about his deportation. The procedure of appeal (after asylum was denied) was never completed as I never got a final notification.”

The Polish Border Guard did not respond to a request to justify the legality of the deportation. 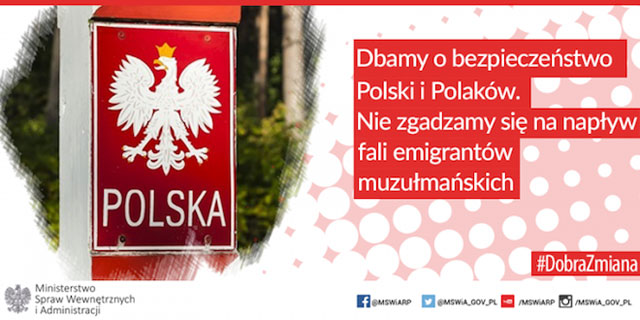 An image from the official website of the Polish Border Guard. It says: ‘We defend Polish men and women. We do not agree to the influx of Muslim migrants.’ Credit: Police Border Guard

“The way the Polish secret services dealt with this case was absurd: they just picked a random person because he came from a specific country and expected him to inform on the moves of others,” said Marta Tycner from leftist party Razem, who was engaged in the campaign to free Alkhawlany.

“They think that any person coming from a Muslim country is a suspect of anti-state activity,” Tycner told IPS. “They were incompetent and now they are trying to cover it up by deporting him fast.”

Law and Justice, the party governing Poland since 2015, has a nationalistic and ultra-Catholic discourse, presenting itself as a defender of embattled Poles against its various ‘enemies’: the European Union, globalisation, Islam. It has overblown fears of a potential terrorist attack by Islamists – although no incidents of this kind or actual threats of it were recorded in Poland – to strengthen its control over society.

Last year, Law and Justice adopted a new anti-terror law which gives authorities the power to fingerprint foreigners or listen to their phones and check their emails without any court order. It also imposed restrictions on the right to protest and online activity.

The right-wing and Catholic media, which are essential in harnessing popular support for the party, routinely associate Muslims with violence. The leader of Law and Justice, Jaroslaw Kaczynski, infamously declared last year that migrants carry ‘very dangerous diseases long absent from Europe’. Alongside Hungary, Poland has been staunchly opposed to hosting refugees under the European Union’s system of relocation quotas.

Poland is one of the world’s most homogeneous countries, with over 97 percent of the population declaring themselves ethnically Pole. Despite very low rates of migration to the country, the most recent ‘European Islamophobia Report‘ showed that over 70 percent of Poles want to see migration of Muslims to Europe restricted, the highest rate among all European countries surveyed. Negative attitudes to refugees increased significantly in the last years.