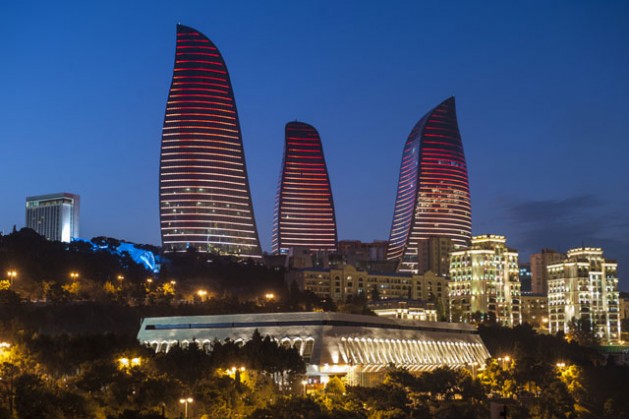 BAKU, Azerbaijan, May 8 2017 (IPS) - It is time to find that “magic formula” that will encourage people to stop conflicts, the rise of violent extremism and hatreds, and live together in peace, urged a United Nations senior official at the end of a UN-backed conference on intercultural dialogue in Baku, Azerbaijan.

In her closing remarks at end of the 4th World Forum on Intercultural Dialogue, the head of the United Nations Educational, Cultural and Scientific Organization (UNESCO) Director-General Irina Bokova expressed hope and optimism that the world is “on the right path” towards building “inclusive and resilient” societies.

More than 500 delegates, experts, academics, business and civil society leaders from 120 countries took part in this year’s Forum, held in Baku (5-6 May) under the theme ‘Advancing Intercultural Dialogue – New avenues for human security, peace and sustainable development‘, which was co-organised along with UNESCO and the UN Alliance of Civilizations (UNAOC), among others.

Bokova also called on participants to act now to stamp out extremism and “build peace in the minds of men and women,” echoing the UNESCO’s own timeless message about the need to make the most of the opportunities to bolster peaceful coexistence provided by our globalised world of increasing interconnections and diversity.

Bokova praised president Ilham Aliyev of Azerbaijan for his “longstanding leadership in promoting intercultural dialogue” as well as the tireless engagement of the First Lady, Mehriban Aliyeva, as UNESCO Goodwill Ambassador for Oral and Musical Traditions.

Azerbaijan has a long history on the ‘Silk Road’ ancient trade route, as a centre for exchange, scholarship and art. Baku’s Walled City is also inscribed on the UNESCO World Heritage List.

Too Early to Cry Victory

A flurry of debates, panel discussions, exhibits and concerts held by renowned artists working to bring people of different walks of life closer together.

Preventing terrorism in cyberspace, educating girls to combat violent extremism, and changing people’s negative perception of migrants in cities were some of the topics broached at the Forum.

The agenda also included such topics as the role of faith, religions, human security, sport, education, art, sustainable development, preventing violent extremism, and business in building trust and cooperation among cultures and civilisations.

Reflecting on the outcome of the Baku Forum, Maher Nasser, Acting UN Under-Secretary-General for Global Communications, said it is too early to “cry victory” or dismiss the event as a failure because that can only be determined by what will follow.

“The discussions that I have seen bring back the importance of dialogue and using culture as a way to connect and to connect societies – sometimes within the same country. How culture bring us together as humans. We may see things differently, but there are also, sometimes, things that can bring us together. Culture and art are important elements of that,” he explained.

Nasser also highlighted the important connection between tourism and culture. “Tourism today is one the top employers around the world… Tourism depends on stability. No one wants to go to a region in conflict, unless you are war reporter. So tourism has a vested interested in promoting peace.”

For his part, Nassir Abdulaziz Al Nassir, UN High Representative for the Alliance of Civilizations (UNAOC), said that military actions and security measures cannot be the only response to the world’s challenges.

“The interconnected nature of today’s crises requires us to connect our own efforts for peace and security, sustainable development and human rights, not just in words, but in practice,” he said.

“The challenge now is to make corresponding changes to our culture, strategy, structures and operations. We must commit to achieve human security and sustainable development, in partnership with regional organizations, mobilizing the entire range of those with influence, from religious authorities to civil society and the business community, he added, adding that women and youth must also be brought to the table.

The Baku Process has become a successful platform to promote “peaceful and inclusive societies” around the world. Since its inception, Al-Nasser said, the Forum has encouraged and enabled people and communities worldwide to take concrete measures to support diversity, dialogue and mutual understanding amongst nations.