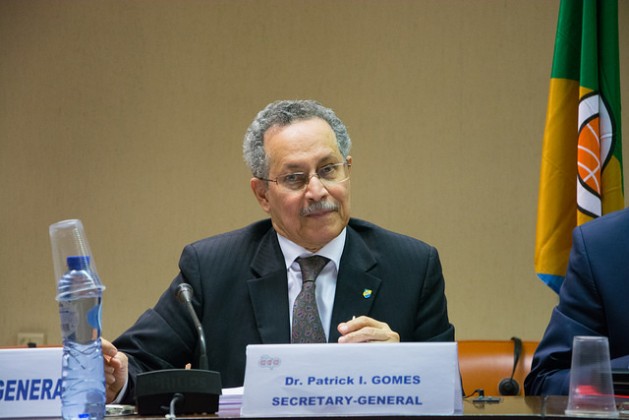 Patrick I. Gomes, Secretary-General of the ACP Group, at the 105th Session of its Council of Ministers in Brussels. Credit: Goele Geeraert/IPS

BRUSSELS, May 7 2017 (IPS) - The African, Caribbean and Pacific Group of States (ACP) met this week in Brussels for the 105th Session of its Council of Ministers to discuss the key question of how these 79 countries could play a more effective role for their own citizens and in the international arena.

The ACP-group was established by the 1975 Georgetown Agreement to co-ordinate cooperation between its members and the European Union. At that time, it consisted of 46 countries of the Caribbean and the Pacific that signed the first Lomé Convention on trade and aid with nine European Union member states.

“The question of insecurity, peace and crime is also a fundamental question of poverty and development." --Patrick I. Gomes

Since then the ACP’s commercial and political clout has grown. Today it counts 79 states. All of them, save Cuba, have signed the Cotonou Agreement that replaced the succesive Lomé conventions and is better known as the ACP-EU Partnership Agreement.

Economic and trade cooperation has been a key component of the ACP-EU partnership. It took the form of Economic Partnership Agreements (EPA’s). They replaced the former non-reciprocal preferences the ACP countries enjoyed and had to meet the World Trade Organization (WTO) requirements. The majority of ACP countries are now implementing an EPA or have concluded EPA negotiations with the EU.

Ethiopia’s Minister of Finance and Economic Cooperation Abraham Tekeste said, “We have to be ready to fundamentally reform our cooperation with the EU after 2020 aiming at deepening our relationship in various, differentiated fronts rather than sticking to the traditional cooperation areas. We must ensure a more balanced partnership with Europe based on shared values and mutual respect.”

The ACP representatives reaffirmed their commitment to enhance ACP-EU trade relations. At the same time, they asked the European Union to show flexibility in responding to concerns from ACP countries.

Another APC challenge of paramount importance will be to demonstrate its comparative advantage in partnerships with governments, the UN, multilateral organizations, civil society, the private sector, academia, and others.

According to Peter Thomson, President of the UN General Assembly, the ACP Group has an added value on the global scene. “It can play a significant role in multilateral agreements such as the 2030 Agenda and the Paris Climate Agreement.”

This has recently been shown by the joint announcement made by the EU and ACP during the COP21 negotiations, representing 28 plus 79 countries of the world. The partners called for a legally-binding, ambitious, inclusive and durable agreement with clear long term goals, as well as a five-yearly review mechanism and a transparency and accountability system tracking national commitment progress.

The statement became known as the “Ambition Coalition”, quickly growing to include major powers and emerging economies.

To play a significant global role, the ACP-group must also invest in stronger intra-ACP cooperation. There the group wants to play a complementary role to national and regional initiatives.

Patrick I. Gomes, Secretary-General of the ACP Group, said, “Looking at the question of security, peace and stability, we do not have an army to go for example after Boko Haram in Nigeria. But as ACP we can ask ourselves why that ideology of Boko Haram appeals to young people and what gives people purpose in life. And that is where the ACP culture programme comes in.

“The question of insecurity, peace and crime is also a fundamental question of poverty and development: how do we have comprehensive approaches to reducing and addressing poverty in all its forms and aspects? ACP makes a contribution in that direction by complementing what is at the national and the regional level. We have to look for examples of success at the national, we have to learn from each other’s experience and make a difference by our intra-ACP programmes.”

No organisation can develop without strong institutions and solid, sustainable financing sources. Therefore the Council asked its member states to invest in a sustainable self-financing capacity of the ACP. It made an appeal to consequently pay their membership contribution and launched the idea of an endowment trust fund.

According to Gomes, “Member countries are receiving millions in grant financing thanks to the ACP. Compared to that amount of money the membership contribution is very little. So we encourage everyone to contribute to keep us going.

“We also encourage voluntary contributions as a start for an endowment trust fund. There is so much wealth and money in our countries. Would our billionaires and corporations not be concerned to look to how they can support their own organisation? We see that as a very important area for our financial sustainability.”

At the end of the two-day meeting, the president of the council, Abraham Tekeste, said, “We have received by our Heads of State and Government clear marching orders to undertake the reforms needed to transform the ACP Group into an effective global player, fit for the 21st century, and responsive to the emerging priorities of our Member States.”