GENEVA, Jun 4 2017 (IPS) - On 20 February 1997, the United Nations General Assembly adopted Resolution 51/77 to promote the rights of children. This Resolution was considered a milestone in promoting and advancing the right of children in conflict and wars. 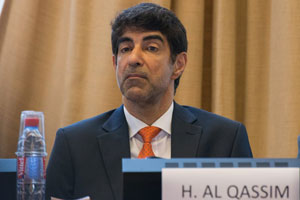 The resolution was also seen as a further acknowledgement of the growing number of States that had signed and ratified the Convention on the Rights of the Child that entered into force on 2 September 1990. To this day only one State has not yet ratified this seminal Convention.

Despite the broad-based ratification of the Convention, children continue to bear the burden of conflicts and calamities. They are indiscriminately targeted by belligerents owing to their vulnerability and physical weakness. According to the United Nations more than 250 million children live in countries affected by conflict.

The 2017 International Day of Innocent Children Victims of Aggression is therefore an important opportunity to recognise the challenges and constraints children experience in the context of wars and conflicts. This day is also celebrated in commemoration of Resolution 51/77 that marked a new era in the joint commitments taken by the Member States of the United Nations (UN) to accelerate the promotion and advancement of the rights of children.

Despite the existing consensus that exists between States, there are various cases of contemporary conflicts that have indiscriminately targeted children and the Arab region is no exception.

In December 2016, UNICEF reported that approximately 2.2 million children in Yemen – out of 3.3 million people – face grave risk of hunger and malnutrition owing to the civil war in Yemen. From the period of 2015 – 2017, civil society and donor governments – in collaboration with its international partners such as WHO, WFP, UNICEF and ICRC – have allocated aid and relief assistance to the hunger-stricken population in Yemen. This has enabled several million children to benefit from the joint efforts of regional and international actors to address the severe food shortage.

This is the gripping reality affecting children in the Arab region. They are not being spared from the adverse impacts of wars and conflicts. They are seen as the easiest victims to target. The international community needs to step up their efforts to provide the necessary aid support to the Yemeni and Syrian civilian populations.

In order to protect children from abuse, exploitation and the intensifying conflicts, peace needs to be given a chance. The conflicts in the Middle East need to come to an end through diplomacy.

It is likewise important that justice triumph in cases where abuses against children are documented. Impunity should not become the norm of societies recovering from wars and conflicts. Peacebuilding and transitional justice require that crimes against humanity be addressed in a transparent and objective manner. Perpetrators who have committed crimes against children need to be brought to justice. They should stand trial for their heinous and barbaric crimes inflicted on civilian populations.

In concluding this statement, I would also like to underscore the importance of education as a peacebuilding measure. On 12 May, I chaired a panel debate at the United Nations Office in Geneva entitled “Human rights: Enhancing equal citizenship rights through education.” The objective of this panel debate was to address the role of education in instilling a culture of peace and tolerance among children in post-conflict environments. The lessons learned from the case studies of Bahrain, Sri Lanka and Colombia underlined the potential of education in enabling children to overcome hostile mindsets – sometime resulting from family backgrounds – and to understand that differences need not beget division but can be an opportunity to celebrate diversity. Many of these countries have taken a number of initiatives in creating supportive environments to facilitate the socializing of children and their peaceful reintegration in society.