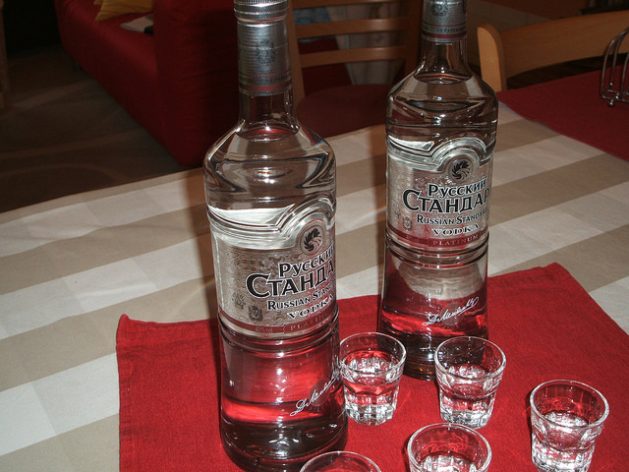 In Russia, the simultaneous increase in the total death rate, deaths due to external causes, and alcohol consumption were all driven by stress. Credit: Pavol Stracansky/IPS

MOSCOW and KUALA LUMPUR, Jul 25 2017 (IPS) - The steep upsurge in mortality and sudden fall in life expectancy in Russia in the early 1990s were the highest ever registered anywhere in recorded human history in the absence of catastrophes, such as wars, plague or famine. The shock economic reforms in the former Soviet economies after 1991 precipitated this unprecedented increase in mortality, shortening life expectancy, especially among middle-aged males.

Shock therapy
During 1987-1994, the Russian mortality rate increased by more than half, from 1.0% to 1.6%, as life expectancy fell from 70 to 64 years! Economic output fell by almost half during 1989-1998 as wealth and income inequalities as well as crime, murder and suicide rates soared.

The dramatic increase in mortality – most pronounced for middle-aged men, mostly due to cardiovascular diseases – has been explained in terms of various factors like falling real incomes, poorer nutrition, environmental degradation, the collapse of Soviet health care, and surges in alcoholism and smoking.

However, dietary changes – less meat and dairy products, yet more bread and potatoes – could not have quickly increased cardiovascular diseases.

Deterioration of health care, smoking and changes in diet would require much more time to increase mortality by so much, while increased pollution is not an acceptable explanation due to the collapse of industrial output.

While deterioration of the Russian diet, the collapse of its health care system as well as increased deaths due to accidents, murders and suicides undoubtedly contributed to increased mortality in Russia, they cannot explain the sudden magnitude of the increase. This leaves two major competing explanations for the mortality crisis – either increased alcohol consumption or heightened stress factors.

Alcoholism
The major explanation popular in the West, as it absolves the West of responsibility, attributes the mortality spike to increased alcohol consumption in the late 1980s and early 1990s after Gorbachev’s anti-alcoholism campaign.

Deaths due to alcohol poisoning are generally considered a better indicator of actual alcohol consumption as some alcohol consumed is produced illegally or smuggled into the country. Such deaths per 100,000 inhabitants increased from 10 in 1990-1991 to nearly 40 in 1994, exceeding the number of deaths due to suicide and murders.

The increased intake of alcohol can, in turn, be attributed to the lower prices of spirits in the early 1990s. But this alcohol explanation does not stand up to critical scrutiny. After all, as with most other goods, demand for alcohol is inversely related to price and positively to personal income and spending capacity.

Second, per capita alcohol consumption levels in the 1990s were equal to or lower than in the early 1980s, whereas the total death rate increased by over half and deaths due to external causes doubled!

The simultaneous increase in the total death rate, deaths due to external causes, and alcohol consumption were thus all driven by another factor, namely stress.

Stress
What were these sources of increased stress and why did they increase premature deaths? Stress factors due to the economic ‘shock therapy’ following the demise of the Soviet Union are associated with the rise in unemployment, labour mobility, migration, divorce, wealth, and income inequalities.

A stress index incorporating these variables turns out to be a surprisingly good predictor of changes in life expectancy in post-communist economies, especially in the Russian Federation.

The evidence shows that many men in their 40s and 50s – who had lost their jobs or had to move to another job and/or another region, or experienced increases in inequalities in their country/region, or had divorced their wives – were more likely to die prematurely in the 1990s.

To reiterate, the Russian mortality crisis of the 1990s was mainly due to the shock economic reforms that led to mass, especially labour dislocations, much greater personal and family economic insecurity and sharp increases in inequalities. The resulting dramatic rise in stress factors was therefore mostly responsible for the sharp rise in mortality.