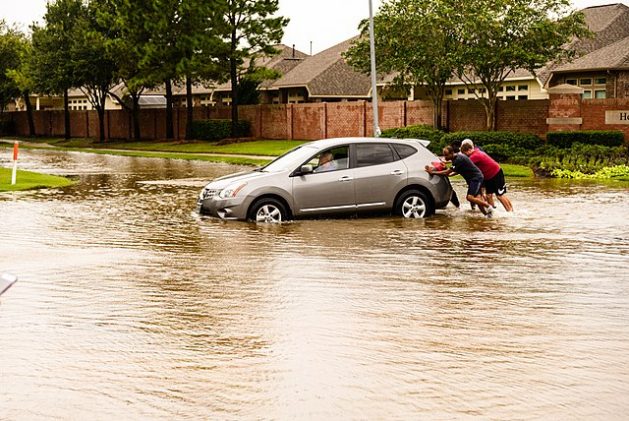 KINGSTOWN, St. Vincent, Aug 31 2017 (IPS) - The government of St. Vincent and the Grenadines says it hopes that the devastating loss and damage that Hurricane Harvey has wrought in Texas might inspire the government of President Donald Trump to rethink its position on climate change.

Hurricane Harvey, the strongest storm to hit the United States since 2005 and the costliest in U.S. history in terms of damage, made landfall in Texas on Aug. 25 and left much of Houston and other parts of the state under feet of floodwater.

"We must be touched with the feeling of their distress and their loss and their grief and their anguish, because we are subject to the same." --Minister of Foreign Affairs Louis Straker

Harvey made its way to the United States about a week after it passed near St. Vincent and the Grenadines and other countries in the Caribbean.

Residents of this eastern Caribbean nation breathed a sign of relief after the only lasting sign of the passage of the storm was some flooding in Bequia, the largest and northern-most of the Grenadine islands.

Harvey made landfall in Texas for a second time in less than a week on Tuesday and the damage it left in the “Lone Star State” was a reminder to Vincentians of the power of tropical cyclones and the damage that they have caused over the last decade in this multi-island nation.

“I wonder what we would be doing if we had that sort of persistent rain. I trust that what is happening in Houston will open the eyes of a lot of people worldwide with regards to climate change,” Minister of Transportation and Works, Sen. Julian Francis told a press conference in Kingstown on Monday.

Francis was updating the media on a road repair programme and the annual road-cleaning that came ahead of September, which is traditionally the heart of the Atlantic Hurricane Season.

The minister noted that the programme, which normally runs for 10 days, was reduced to eight because of the passage of Tropical Storm Harvey.

But the two days of work that the temporary workers employed under the programme lost as a result of the storm was nothing compared to the damage and loss left by less powerful weather systems over the past few years. The senator, who also has ministerial responsibilities for local government, expressed sympathy for the victims of Harvey but also criticized President Trump, who shortly after taking office pulled the United States out of the global Paris Accord to reduce the greenhouse emissions driving climate change and severe weather, has attempted to cut government funding for the agencies that monitor climate, and has long downplayed the problem while promoting the fossil fuel industry over renewables.

“It is pouring down on the fourth largest city in the United States of America but we know what the position of the sitting president and his administration is with regards to climate change.

“So I trust this comes as an eye-opener to the administrators and policymakers in the United States of America. I do feel sad and sympathise with the people of Texas… I have been following it closely and I say I wonder what would happen to us if we had that sort of downpour,” Francis said.

Speaking at a separate event later on Monday, Prime Minister Ralph Gonsalves said that St. Vincent and the Grenadines is among the top 10 countries in the world most vulnerable to extreme weather events as a result of climate change.

“We don’t have to have high winds. Because we are mountainous, we have a lot of landslides, the rivers overflow their banks, a lot of disasters are caused in this country by heavy rainfall, without the wind.”

Gonsalves said that the nation’s seacoast is being eroded by wave action resulting from the frequent and more intense storms associated climate change.

“The entire eastern coast is being eroded and also on the western side of the island,” he said.

He noted that between 2014 and 2016, his government has had to rebuild five major bridges in a five-mile area in eastern St. Vincent.

The bridges were built to replace older ones damaged or destroyed by extreme weather events, which also necessitated redesign to accommodate larger water flows during storms ranging from tropical depressions to hurricane.

At a total cost of 7.4 million dollars, the bridges represent a significant budgetary expense in a multi-island nation whose capital expenditure allocation in 2016 was 74 million dollars.

“I say these things so that we can keep this matter in focus,” said Gonsalves, whose government in May introduced a one per cent levy to help fund the cost of disaster response and mitigation.

In 2016, flooding as a result of tropical waves left damage to public infrastructure totalling EC$37 million, almost 10 per cent of the 342-million-dollar national budget.

Meanwhile, at Tuesday’s meeting of the national assembly, Minister of Foreign Affairs Louis Straker expressed solidarity with the people of the United States, and used the experience of St. Vincent and the Grenadines to remind nationals of what Texans might be experiencing.

“We are not immune to natural disasters and we have had our own flooding here, the major one being 2013 Christmas Eve, in which 13 lives were lost,” Straker said.

“Some people say that this is because of global warming, climate change, something that is denied and rejected by the president of the United States,” he told parliament.

“But what we have seen in Texas what is referred to in language as ‘of epic proportion’, ‘unprecedented’, ‘one in a 100 years’, the president said one in 500 years, and it is catastrophic. We must be touched with the feeling of their distress and their loss and their grief and their anguish, because we are subject to the same,” Straker said.

The foreign minister, whose oldest son lives in Texas, told lawmakers that all residents of the state have been affected in one way or the other.

“And we have to commiserate and sympathise and show solidarity with the Vincentians in the diaspora and with the hundreds of thousands of other people in Houston who have been affected by this storm, Harvey,” he said, noting that the storm passed St. Vincent and the Grenadines without much devastation.

Speaking about the impact on the lives of the people of Texas, he added, “Could you imagine that people work all their lives to build a home — that is very previous to a lot of people — and you furnish your home and you live comfortably with your family and within the space of a day or two, you could lose everything and you are left homeless? That’s a chilling prospect that all of us should contemplate,” Straker said.

Regionally, the Caribbean Community (CARICOM), a block of 15 Caribbean nations, also extended its sympathies to the government and people of the United States and especially the State of Texas on the loss of lives and extensive damage to property and infrastructure following the passage of Hurricane Harvey.

CARICOM Secretary-General, Ambassador Irwin LaRocque, in a message to U.S. President Donald Trump, said CARICOM is confident that the people of Texas and the wider United States have the resilience to recover from the disaster.

LaRocque assured Trump that CARICOM stands with the Unites States at this time of disaster.

“The widespread destruction wrought by this hurricane has brought suffering to many and will necessitate a significant and lengthy rebuilding process,” LaRocque said. “The unprecedented nature of this climatic event highlights the unusual nature of weather patterns that continue to affect nations across the globe.”