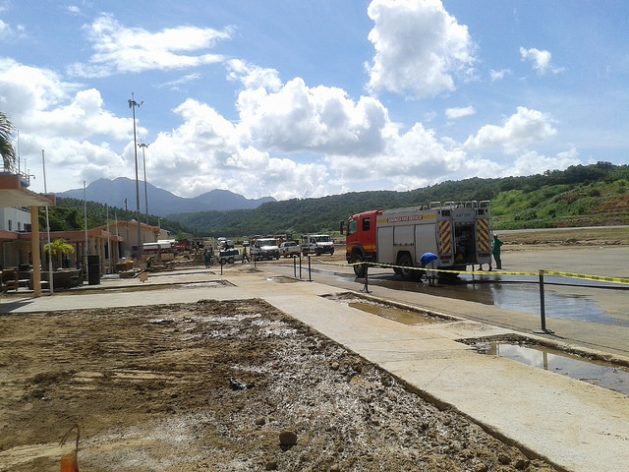 Tropical Storm Erika, the deadliest natural disaster in Dominica since Hurricane David in 1979, extensively damaged the island’s main airport in August 2015. Saint Lucian Prime Minister Allen Chastanet says time is running out for small states such as those in the Caribbean as they struggle to develop infrastructure capable of withstanding changes in weather conditions. Credit: Desmond Brown/IPS

The Saint Lucian leader, Allen Chastanet, said time is running out for small states such as those in the Caribbean as they struggle to develop infrastructure capable of withstanding changes in weather conditions.

The momentum of progress on climate change has been stymied by recent decisions by the United States in relation to the Paris Agreement.

“I am going to keep pounding on the table and letting my voice be heard explaining that the SIDS cannot wait,” Chastanet said.

“There is no greater example of that than what took place in Haiti. Did we not know that Haiti was in a hurricane belt? Did we not know that there was clearly a trend of increasing storms? That all we needed was a trough? What took place last year, the world and all of us must bear responsibility for. The Haitian people were left to confront one of the strongest and most devastating hurricanes we have seen in a long time with cardboard boxes.”

On October 4 last year, Hurricane Matthew struck southwestern Haiti leaving widespread damage in the impoverished Caribbean nation. Matthew was a late-season Category 5 hurricane on the Saffir-Simpson scale, having formed in the southeastern Caribbean on September 28.

In addition to loss of life, the economic damage to the nation was truly staggering. The Haitian aid group CARE placed the damage done by Hurricane Matthew to Haiti at 1 billion dollars.

Haiti is of the world’s poorest countries and vulnerable to such natural disasters. The United Nations proclaiming Matthew to be the greatest humanitarian crisis to affect the country since a devastating earthquake six years ago. The country was essentially cut in half as the storm destroyed transport links. After slicing through Haiti and killing more than 800 people, Matthew also pounded Cuba and The Bahamas.

Chastanet, who was speaking at a ceremony for the exchange of notes for Japanese grant aid of EC$35 million to the government of St. Lucia for the reconstruction of two major bridges, said time is of the essence.

“Time is against us. I say all of this to underscore that point and for us not to take for granted the significance of today. It is very easy for us to continue to come to these signings of agreements and almost take it for granted what we are receiving. This project has the opportunity and potential to protect the lives and the assets of many people,” he said.

“In terms of upgrading the country’s already expensive infrastructure, time is against small states like Saint Lucia in their fight to develop the road network and bridges capable of withstanding weather changes.”

St Lucia was also hit by Matthew as a tropical storm. The island experienced the most severe effects among Organisation of Eastern Caribbean States (OECS) nations, with damage to homes and businesses accompanied by blocked roads and flooding.

The prime minister repeatedly thanked the Japanese for the Grant for the bridges which are expected to commence in early 2018. He also pointed to the assistance of the World Bank and the International Monetary Fund as SIDS position themselves to combat the effects of climate change.

“I had the opportunity to attend World Bank meetings and IMF meetings and I am very grateful that both those organisations have chosen to have a setting for the small island developing states of the world,” Chastanet noted.

“That was followed by the COP meeting that took place in Marrakech. I want to also recognize the work that was done by our predecessors in supporting the climate change agreement at COP in Paris in which we formalized the recognition that climate change is real and a roadmap for how the world intends to be able to deal with the problem.  In the roadmap, the world gave itself a challenge to raise 100 billion dollars to go towards mitigation and funding adaptation.”

The prime minister explained that the momentum had been stymied by recent decisions by the United States in relation to the Paris Agreement.

But he said some of the SIDS, inclusive of Saint Lucia are proposing alternatives to get assistance for critical infrastructural projects that help with adaption.

“One is exactly what is taking place here today where the Government of Japan, through JICA, are making a bilateral contribution to Saint Lucia in a project that is a critical infrastructural project. What we would like to see is Japan being given a credit for that contribution,” explained the Prime Minister.

Although the United States remains part of the United Nations Framework Convention on Climate Change, in June this year President Donald Trump ceased all implementation of the non-binding Paris accord.

That includes contributions to the UN Green Climate Fund (to help poorer countries to adapt to climate change and expand clean energy) and reporting on carbon data (though that is required in the US by domestic regulations anyway).

Permanent Secretary in the Department of Infrastructure, Ports and Energy Ivor Daniel, who gave an overview, explained that the bridge repair project is in-keeping with the National Hazard Mitigation Policy, which aims to reduce the country’s vulnerability to natural hazards and the impact of climate change.

The assistance is being channelled through the Japan International Cooperation Agency (JICA), and that organization’s director general for Latin America and the Caribbean Hajime Takeuchi also spoke about the significant contributions made to assist not just Saint Lucia but the region.