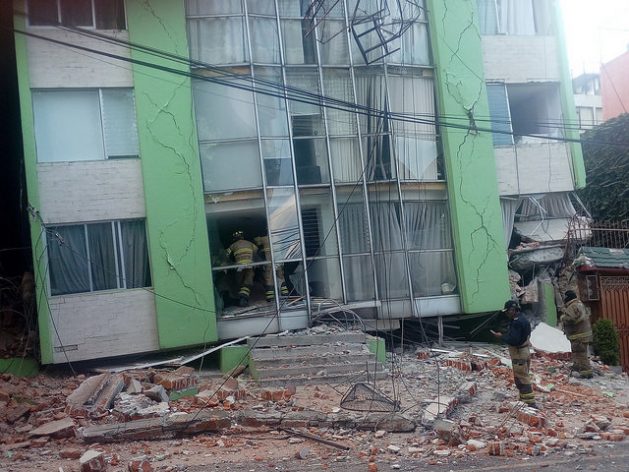 The Sept. 19, 2017 earthquake toppled nearly 50 buildings in Mexico City, and left many uninhabitable. Fire fighters carry out an inspection the day after in an apartment building that is still standing but will have to be demolished, in a neighbourhood in the centre of Mexico City. Credit: Emilio Godoy/IPS

MEXICO CITY, Sep 20 2017 (IPS) - Central Mexico faced Wednesday the challenge of putting itself back together after the powerful 7.1-magnitude quake that devastated the capital and the neighbouring states of Mexico, Morelos and Puebla the day before.

In Mexico City the air smells of dust, destruction, death, panic and hope, brought by the quake, whose epicenter was in Morelos, 120 km to the south of the capital. So far the official death toll is 230, with hundreds of people injured and 44 collapsed buildings in Mexico City.

“Everything is cracked, everything’s about to fall down. Now I don’t know what I’m going to do,” Verónica, who lived in a new building on the verge of collapse on the south side of the capital, told IPS with tears in her eyes.

The mother of three, who preferred not to give her last name, was living alone for the last two years. She managed to salvage a few important things, like documents, jewelry and a TV set. She is now staying with one of her daughters in another part of greater Mexico City, which has a population of nearly 22 million people.

In Mexico City, the municipalities of Benito Juárez and Cuauhtémoc – two of the 16 “delegations” into which the city is divided and which together are home to nearly one million people – were hit hardest, along with parts of the states of Morelos and Puebla.
The capital is built on a dried-up ancient lakebed, which makes it more susceptible to earthquake damage.

On Tuesday, the interior ministry declared a state of disaster in the capital and 150 municipalities in Guerrero, Morelos and Puebla that were affected by the quake, to free up funds from the National Fund for Natural Disasters (FONDEN).

Berenice Rivera works as a seamstress, and she and her co-workers were evacuated from the building as soon as the first tremors were felt. “I ran to pick my kids up at school and went home to check if everything was ok,” the mother of two told IPS.

Given the structural damage to a tall nearby building, Rivera does not believe she can continue to live in the housing complex where she lives along with some 80 neighbours. “We’re going to pull things out and see where we can move to, what else can we do?” she sighed.

Construction workers were among the first to get involved in the effort to rescue survivors, leaving the buildings where they were working and using their hands to remove rubble to find people who might be trapped underneath. It was the start of a wave of citizen solidarity and support that continues to grow along the streets and avenues of the city. 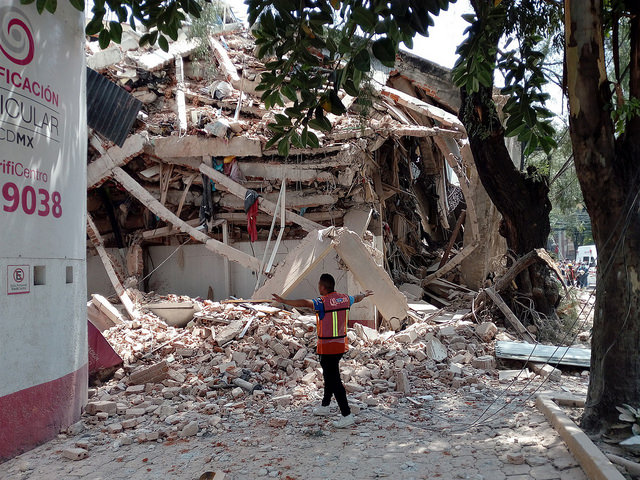 A rescue worker attempts to secure the perimeter of a building toppled by the Sept. 19, 2017 earthquake, to keep former residents from trying to get inside – something that has happened in many buildings knocked down or badly damaged by the quake in Mexico City. Credit: Emilio Gody/IPS

Just like after the 8.0-magnitude quake that left 25,000 people dead in Mexico City – according to unofficial figures – on Sept. 19, 1985, people mobilised en masse to remove rubble in the search for survivors, in a brave and often disorganised show of solidarity.

Although basic public services have been restored, economic, commercial and educational activities have come to a halt. The work is focused on finding survivors under the rubble, assessing the damage to buildings, and depending on the result, demolishing them and relocating the residents while planning the reconstruction effort.

But more buildings are at risk of collapse because of the damage suffered. In addition, the quake – which happened on the 32nd anniversary of the worst quake in the history of Mexico, during a drill on how to deal with a disaster of this kind – will have environmental and health effects.

“The situation is very difficult,” Mexican-American Juan Cota, who has been living in the capital since 2011 and works in the financial sector, told IPS. “There are damaged buildings that could collapse.”

Cota was in a café on the south-central side of the city when the quake began. His apartment survived, but some of his neighbours were not so lucky.

The Mexico City government has opened at least 41 shelters for survivors throughout the capital.

According to its model for estimating earthquake damage, the United States Geological Survey (USGS) predicted up to 1,000 fatalities and economic losses between 100 million and one billion dollars.

The USGS stated that “Extensive damage is probable and the disaster is likely widespread. Estimated economic losses are less than 1% of GDP of Mexico. Past events with this alert level have required a national or international level response.”

The quake has further stretched the country’s disaster response system, already overwhelmed by the 8.1-magnitude quake that hit on Sept. 7, with an epicenter off the coast of the southern state of Chiapas, and which also affected the state of Oaxaca and Mexico City.

Over two million people were affected by that quake, including some 90 people who were killed, according to government statistics.

In August, the World Bank Group issued its largest ever catastrophe bond to Mexico.

The bonds are divided into three categories of insurance: Atlantic Ocean hurricanes, Pacific Ocean hurricanes and earthquakes, providing Mexico with financial protection of up to 360 million dollars against losses.

Each year, this Latin American country dedicates some 1.5 billion dollars to the reconstruction of public infrastructure and social housing affected by natural disasters. Between 2014 and 2015, FONDEN disbursed 137 million dollars to address the damage caused by hurricanes, heavy rains and flooding.

The earthquake has fanned the flames of the debate about the construction standards in force in Mexico City, which were upgraded after the 1985 tragedy. “They say they’re stricter, but look at that building. It’s new and it’s about to come down,” said Verónica.

Cota believes the standards are not always enforced, mainly because of corruption. “They ignore them…they have to be revised and enforced, because the earth will continue to shake and there will be more damage,” he said.

Tuesday’s earthquake occurred near the area where the Cocos Plate, off Mexico’s Pacific coast, is pushing underneath the North American Plate – a phenomenon that points to further quakes.