“The United States has great strength and patience, but if it is forced to defend itself or its allies, we will have no choice but to totally destroy North Korea. Rocket Man is on a suicide mission for himself and for his regime.”
– President Donald Trump, speech at United Nations, 19 September 2017 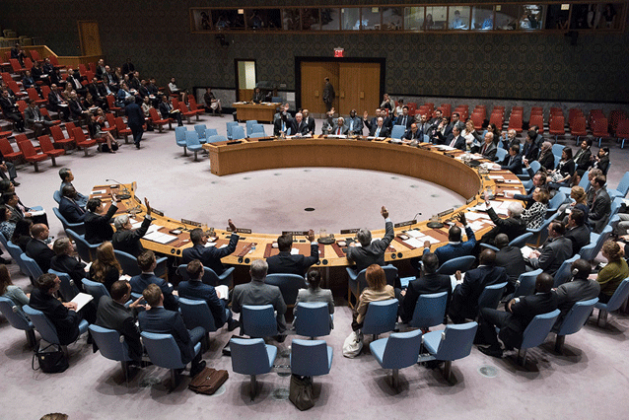 He said that North Korean nuclear forces are “a war deterrent for putting an end to nuclear threat of the U.S. and for preventing its military invasion,” referred to “our rockets’ visit to the entire U.S. mainland,” and called Trump “mentally deranged”.

Instead of exchanging threats and insults, the two governments should agree on a non-aggression pact as a step toward finally concluding a peace treaty formally ending the 1950s Korean War and permanently denuclearizing the Korean peninsula.

The U.S. and North Korean threats are wrong as a matter of morality and common sense. They are also contrary to bedrock requirements of international law. Both countries, by engaging in a cycle of threats and military posturing, violate prohibitions on the threat of force to resolve disputes and on threats to use force outside the bounds of the law of armed conflict.

Trump’s threats carry more weight because the armed forces of the United States, backed by an immense nuclear arsenal, could accomplish the destruction of North Korea in short order.

A threat of total destruction negates the fundamental principle that the right to choose methods and means of warfare is not unlimited:
• Under the law of armed conflict, military operations must be necessary for and proportionate to the achievement of legitimate military objectives, and must not be indiscriminate or cause unnecessary suffering. Protocol I to the Geneva Conventions prohibits threatening an adversary that there will be no survivors or conducting hostilities on that basis. The Nuremberg Tribunal found the Nazi concept of “total war” to be unlawful because it runs contrary to all the rules of warfare and the moral principles underlying them, creating a climate in which “rules, regulations, assurances, and treaties all alike are of no moment” and “everything is made subordinate to the overmastering dictates of war.”
• Conducting a war with the intention of destroying an entire country would contravene the Genocide Convention, which prohibits killing “with intent to destroy, in whole or in part, a national, ethnical, racial or religious group ….”
• Limits on the conduct of warfare apply to both aggressor and defender states. Thus Trump’s statement that total destruction would be inflicted in defense of the United States and its allies is no justification. Moreover, the U.S. doctrine permitting preventive war, carried out in the illegal 2003 invasion of Iraq, means that Trump’s reference to “defense” does not necessarily rule out U.S. military action in the absence of a North Korean attack or imminent attack.
• While the United States likely would not use nuclear weapons first in the Korean setting, it remains true that Trump’s references to “fire and fury” and “total destruction” raise the specter of U.S. nuclear use. North Korea has explicitly warned of use of its nuclear weapons. Nuclear weapons cannot be used in compliance with the law of armed conflict, as the recently adopted Treaty on the Prohibition of Nuclear Weapons recognizes. Threats of use of nuclear weapons are likewise unlawful. The illegal character of the threat or use of nuclear weapons is especially egregious where the express intent is to “totally destroy” an adversary, a purpose that from the outset rules out limiting use of force to the proportionate and necessary.

U.S. and North Korean threats of war are also unlawful because military action of any kind is not justified. The UN Charter prohibits the threat or use of force except in self-defense against an armed attack or subject to UN Security Council authorization:
• Article 51 of the UN Charter permits the use of force as a matter of self-defense only in response to an armed attack. No armed attack by either side has occurred or is imminent.
• The Security Council is addressing the matter and has not authorized use of force. Its resolution 2375 of 11 September 2017 imposing further sanctions on North Korea was adopted pursuant to UN Charter Article 41, which provides for measures not involving the use of force. There is no indication whatever in that and preceding resolutions of an authorization of use of force. Moreover, the resolution emphasizes the need for a peaceful resolution of the dispute with North Korea. That approach is mandated by the UN Charter, whose Article 2(3) requires all members to “settle their international disputes by peaceful means in such a manner that international peace and security, and justice, are not endangered.”

It is urgent that diplomatic overtures replace threats. In the nuclear age, the first principle of diplomacy should be that adversaries talk to each other to the maximum possible extent, and in moments of crisis directly and unconditionally. We learned during the Cold War that even when the prospects for any tangible progress seem dim, negotiations between nuclear-armed adversaries have other positive results. They allow the military and political leaderships of the adversaries to better understand each other’s intentions, and their fears, and build broader channels of communication.

Accordingly, the United States should declare itself ready and willing to engage in direct talks with North Korea, and a commitment to denuclearization should not be a precondition for such talks. To facilitate negotiations, the United States and South Korea should immediately cease large-scale military exercises in the region, providing North Korea with an opportunity to reciprocate by freezing its nuclear-related testing activities.

The immediate aim of negotiations should be a non-aggression pact, as a step toward a comprehensive peace treaty bringing permanent closure to the Korean War and providing for a nuclear-weapon-free Korean peninsula.

Success in denuclearizing the Korean peninsula will be much more likely if the United States, Russia, China and other nuclear-armed states also engage, as they are obligated to do, in negotiations for a world free of nuclear weapons.